Today we take a look at another first round prospect that has been routinely picked in mock drafts in Taylor Lewan from Michigan.

Today we take a look at another first round prospect that has been routinely picked in mock drafts in Taylor Lewan from Michigan. After resigning left tackle Eugene Monroe and trading for center Jeremy Zuttah, the Ravens only hole along the offensive line remains at right tackle. The Ravens watched former first round pick, Michael Oher take his talents and false starts to the Tennessee Titans this offseason and look to upgrade the position at a cheaper price by grabbing one of the top talents in this year's draft.

At 6-foot-7 and 309 pounds, Lewan has the makeup of a prototype left tackle even though the Ravens would use him as a right tackle at least initially.

Lewan has a good side step, quick feet and fast hands. While playing the more difficult left tackle, he was able to beat rushers with relative ease and keep them at bay but was frequently helped by a chipping tight end on his side. He could use more initial punch in his hands to buy him a little more time against power rushers and could use to add a little meat to his bones in order to set his feet and stand his ground better.

Lewan is a monster of a man with a good first step and a mean streak when blocking. However, while his technique is solid and he has the size advantage, you never see him dominate at the point of attack. He regularly makes the block well enough, but he should be knocking his player 5 yards out of the play on most downs and you don't see that with him. You would want to see him get stronger and bulk up slightly in order to utilize his mentality better.

Here is why Lewan has a chance to fall to the Ravens at the 17th pick. he is a tough player but has a serious temper problem that will keep teams away. Add that to the off the field problems including charges for assault and involvement in a possible rape case. After the Miami bullying issue of the past year and the NFL's attempt to crack down on negative publicity from it's players, teams will have questioned him and probed his character more than you would like from a first round talent.

There is a reason that Lewan was a top talent in 2012 and why he is one of the top tackles in this year's draft. He could use to hit the weight room a little more and will need to be watched closely to manage his temper but he has the talent and physical attributes to be a solid left tackle for his entire career. A move to the right side would initially limit his ability but he could dominate quickly after getting adjusted. He has some flaws in his game that, if corrected, could see him as a great Pro Bowl level tackle. The issue with Lewan ends up being that you have to question if you can count on him to keep his nose clean enough to actually play.

I am one of the few people around that think Lewan slides a great deal. He is a sure fire top 10 talent based on talent alone but I think the Ravens will have him as an undraftable player given his attitude and problems off the field. My guess is that he slides into the 20s before a team just can't pass on his talent any longer.

pssst.... He does have a really awesome tattoo 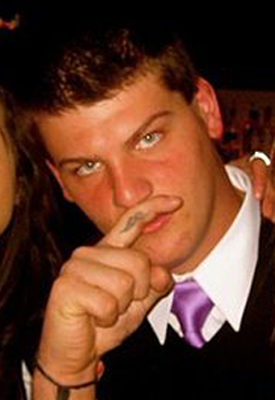 Doesn't that just have all the markings of a classy individual?