Share All sharing options for: An Explanation of Jimmy Smith's Latest Surgery

After undergoing surgery for a Lisfranc injury back in November 2014, Jimmy Smith is headed back to the operating room for another surgical procedure on his foot. In this article we'll review what a Lisfranc injury is, what his latest surgery will entail, and what this means for his 2016 season.

WHAT EXACTLY IS A LISFRANC INJURY?

The tarsometatarsal joint (also known as the Lisfranc joint complex) is the area where the tarsal bones of the midfoot articulate with the metatarsals of the forefoot. A series of ligaments help to bind these structures together, most notably the Lisfranc ligament which spans from the medial cuneiform to the second metatarsal base (see below). A Lisfranc injury is simply a disruption of this articulation; resulting in a dislocation, and possible fracture, to one or more of the metatarsals.

These are relatively common, but often serious injuries that have sidelined several past Pro-Bowlers including Maurice Jones-Drew, Santonio Holmes, and Le'Veon Bell. 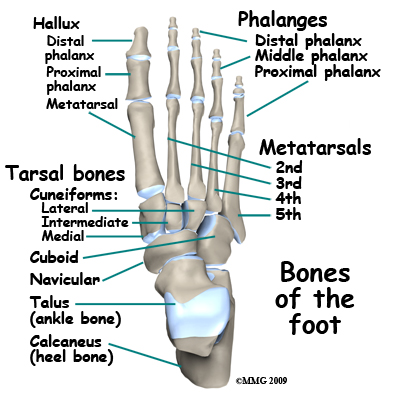 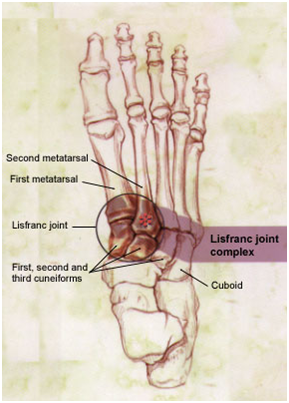 A Lisfranc injury occurs when an axial load (weight) is placed upon an individual who is weight-bearing on their metatarsal heads (see below). A common example of this is when an athlete makes a sharp cut and their cleat becomes embedded in the turf. That twisting maneuver, along with the foot supporting their entire body weight, places enough torque for ligaments to tear, joints to dislocate, and bones to potentially fracture. 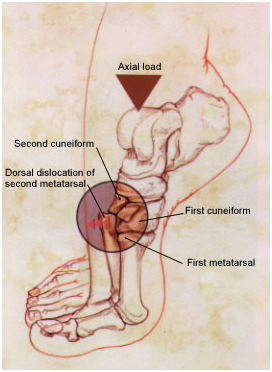 HOW ARE THESE INJURIES TREATED AND HOW LONG DOES IT TAKE TO RECOVER?

Lisfranc injuries can be treated either non-surgically or surgically. The decision entirely depends upon the severity of the injury. In cases when surgery is not required, recovery can still take up to 6-8 weeks because of stretched/damaged ligaments.

If there is evidence of significant instability (i.e. dislocations, fractures) then surgery is required to stabilize the foot with a combination of screws and metal plates.

SO WHY IS IT NECESSARY FOR JIMMY SMITH TO HAVE A SUBSEQUENT SURGERY?

Just like with any surgery, some players respond and recover better than others. Due to the fact that screws, metal plates, and other hardware are utilized in a Lisfranc surgery, one of the main concerns for an athlete is regaining adequate foot mobility. A certain amount of this is necessary in order to be able to effectively cut and change directions. For an NFL cornerback these skills are vital. If lacking, their reaction speed tends to be a bit slower and performance will therefore suffer. This is obviously something that Smith struggled with for much of last season.

The purpose of his latest surgery is to merely remove the hardware from his foot. This is a relatively minor procedure and is only expected to sideline Smith for 4-6 weeks. The removal of his hardware, along with proper rehab, should help facilitate greater mobility to the bones and joints of his foot.

It's been reported, on average, that athletes tend to still have discomfort for 16 months following surgery. However, research has found that the majority of NFL players (84.6%) recovering from Lisfranc surgery are able to return to competition within 9 to 15 months. It also found that nearly 93 percent of NFL players who sustained traumatic injuries to the midfoot (between 2000-2010) returned to competition less than 15 months after injury and with no statistically significant decrease in performance.