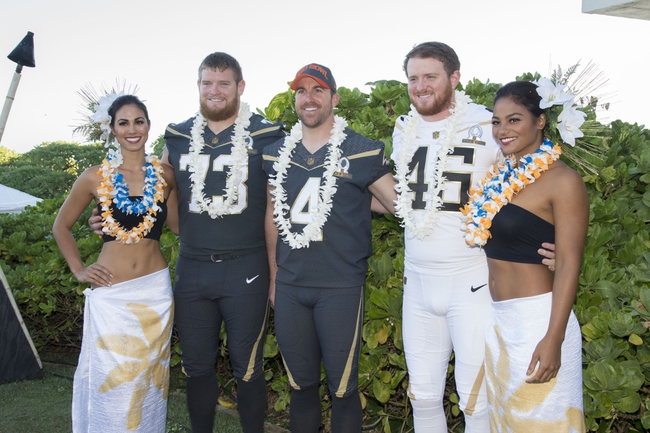 The NFL has worked to make the Pro Bowl a more competitive game and a more interesting game to watch for fans.

The verdict after yesterday: undecided?

Team Irvin trounced Team Rice, 49-27 and the bombs were a'plenty. Just take a peek at this scoring summary:

Seahawks QB Russell Wilson won the Offensive MVP with three first half  TDs.  Yes, you read that right. They were set up by bombs of 61 and 48 yards. This was certainly the tone-setting for the day. Actually preceding that was a 28 yard strike from Eli Manning to T. Kelce on Team Rice's first possession. After a tipped interception of Manning on a following possession, Team Irvin had a short drive to take a two-TD lead which they would never allow to dwindle.

Seahawks DE Michael Bennett got the Defensive MVP for wreaking havoc, having the game's only sack, a Tackle for Loss, a Pass Defensed, and a QB hit.

What's up with Johnny Hekker getting so many fake punt opportunities? We want more Sam!