Torrey Smith, like most wide receivers I would argue, is a very enigmatic player.

Some of that is the nature of the position -- it is very difficult to separate the receiver's contribution from the quarterback's. Some of it is our natural fascination as fans with the one position whose job it is to perform acrobatic heroics to catch a football.

The crux of Torrey's enigma stems from the perception that he is not a "True #1". I've been watching and studying football for a long time and I still have no idea what that term even means. At best, I guess it means Torrey is not in the top tier of receivers.

But I'm not interested in labels. I'm interested in value and I'm hoping Baltimore feels that way, too. Does Torrey Smith still offer us good enough value on an expensive second contract that stands to increase his pay by potentially 700% or more? I'm not talking some chump change pipe dream like $5.5 million a year either. That's a fantasy. I'm talking $7-8 million a year, which as it turns out, is what Baltimore offered last year allegedly.

I hope to change your mind.

I did a Google search on Torrey Smith in 2014 and I found quite a few hits with a common theme: Torrey Smith had a down year or otherwise disappointed for a guy hoping for a big contract extension. Baltimoreravens.com, ever the bastion of truth, has said as much multiple times this offseason.

Unfortunately, they are wrong. Torrey Smith was a top 10 receiver this year. But its up to me, the prosecution, to prove it.

DYAR, which you can read about here, is a great stat for evaluating individual players. Football Outsiders describes it thusly:

It incorporates what the player does (success or failure, first down or touchdown etc.), when he does it (down and distance), and against what opponent (e.g how good their pass defense is). It doesn't account for volume, but we'll get to that.

Here are the top 10 DYAR leaders for 2014 at Wide Receiver -- I think you'll find it holds up well across the NFL: 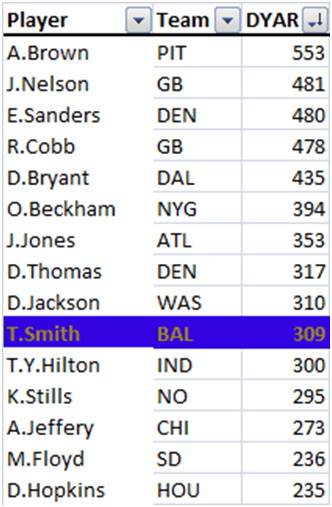 Torrey Smith had more value on the season than T.Y. Hilton, who played on the league's top producing pass offense, and equitable value to Demaryius Thomas, who will probably make about $3 million more per year in free agency and who is perceived to be a "True #1".

But if Torrey's value (DYAR) is so high, why is his yardage total so low then?

For any "counting" stat, like total yards, we need context. How many games did the play, and more importantly, how many targets did they get? Volume matters. For instance, Calvin Johnson set the NFL record for yards in 2012. He also set the record in targets with 206. What other receivers might have that many yards with 200+ targets?

Torrey Smith had 92 targets in 2014. That is half as many as league-leader Demaryius Thomas (184) or second place Antonio Brown (181). Both those teams had better offenses than ours this year, but the Ravens had a top 10 offense -- it's not like we couldn't sustain drives or keep him on the field.

Here's a table of the top 10 Target leaders and Torrey's ranking relative to them: 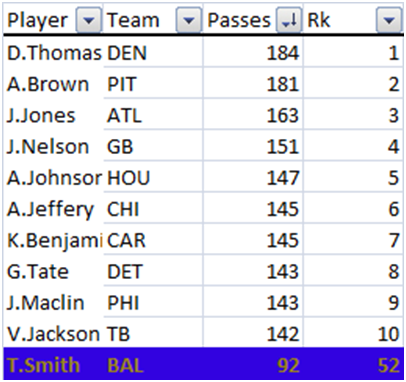 Torrey was 52nd in targets so right away, we have to be suspect of a stat like Total Yards as the sole means of judging a receiver. Targets are a good start to peeling back the onion.

But we're missing something. It's quantifying the stuff that doesn't make the stat sheet. It's the passes that Torrey doesn't get credit for because it resulted in a penalty. What I'm trying to say is...

Here's are two tables that captures just how ridiculous Torrey is at generating DPI and DPI yardage compared to his peers: 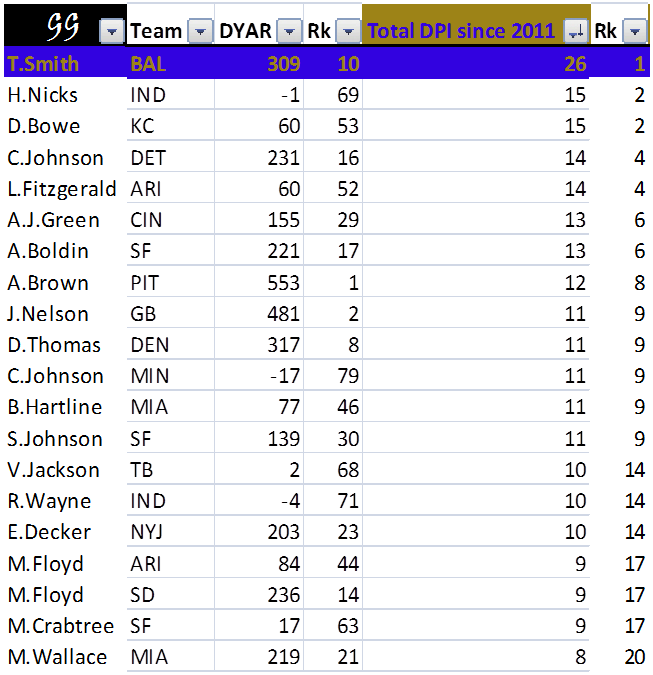 And here it is sorted on DPI Yardage: 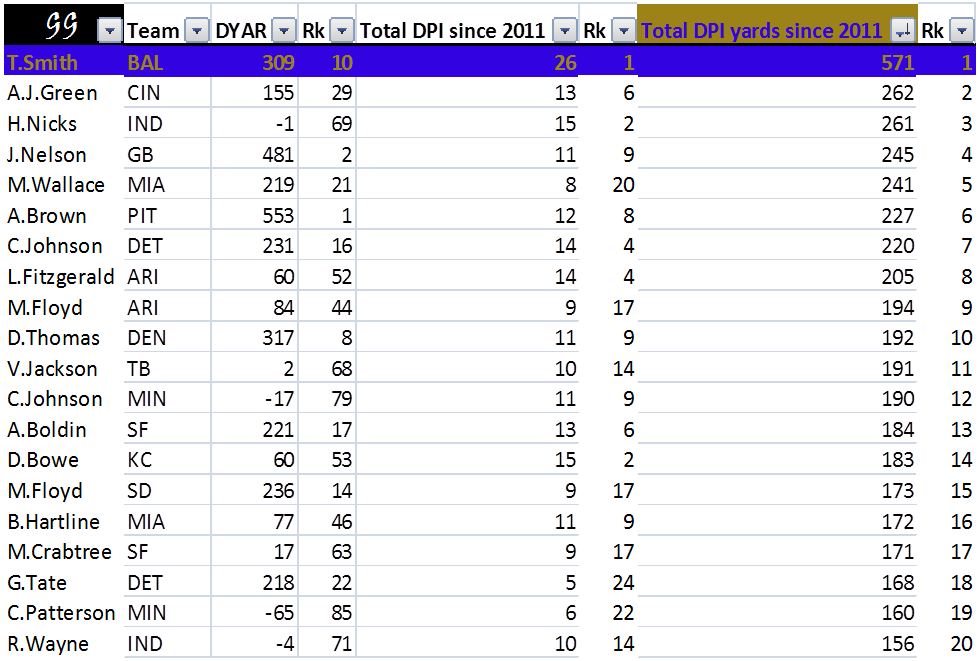 Smith generates DPI 58% more often than his peers since 2011 and he has generated DOUBLE the DPI yardage as the next closest players.

In fact, if we subtracted Torrey Smith's entire 2014 season (11 DPI, 229 DPI Yards) from his career totals, he would still lead the NFL in DPIs and DPI Yardage drawn since 2011.

That's just insane. That Smith is fast or Flacco has a cannon arm doesn't even begin to explain how big a disparity that is. I can barely comprehend it myself.

There's only one thing I know for fact: Torrey Smith going deep is the scariest moment in a defensive back's life. Because they panic and commit DPI at an almost preposterous rate.

Using Expected Yards instead of Yards

Football Outsiders' database has another yardage category called "Expected Yards". Here's what they say about this stat themselves:

In short, Expected Yards can help us evaluate a player like Torrey who lost a lot of production to DPIs. It's not better than DYAR at conveying value, but it might be a better reflection of production than Yards itself.

Here's that table for 2014 with differential between actual and expected yards on the far right column: 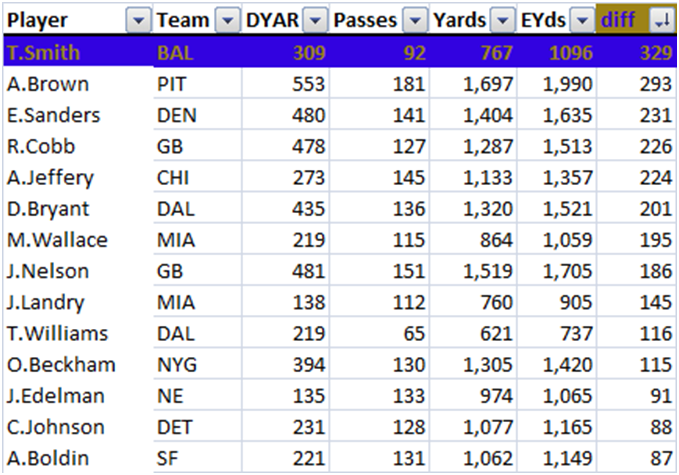 Basically what this table is saying is that Torrey Smith was massively underrated this past year. That by the way, is a studly list of receivers. Coincidence? Doubt it.

He had the touchdowns (11). His team had the wins (10) and he was fine in the playoffs. He just didn't have the raw yardage. Except maybe he did.

Putting it all together

Now that we have a yardage total that actually counts his DPIs, we're going to take his Expected Yardage and divide it by his Volume (Targets). It's not quite as powerful a stat as Yards/Attempt is for a quarterback, but this at least eliminates a lot of flaws with total receiving yardage.

Without further ado, the NFL's top 20 leaders in (Expected) Yards per Target: 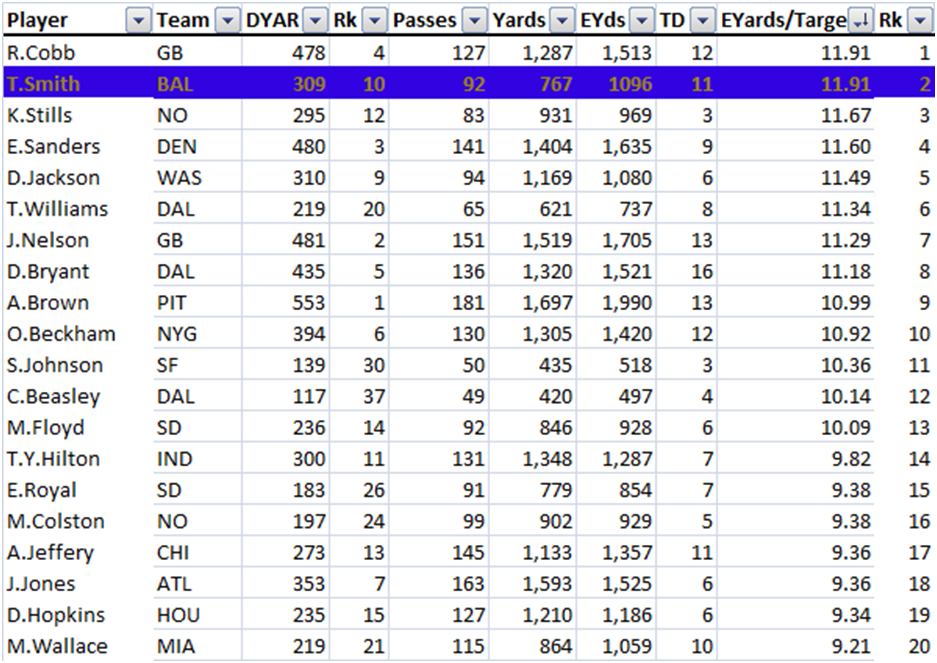 As you can see, it's not the end all be all stat, but it includes a lot of the best receivers and properly accounts for volume and penalties drawn.

Verdict: Torrey's appearance in 2014's top 10 most valuable wide receivers is no accident.

Hopefully I've made a convincing case for Torrey's value to us. I'll let someone else make the argument of "True #1/Not True #1". I honestly don't think it matters at the end of the day.

He's been a great Baltimore Raven, a home run as a 58th overall pick, and a guy who has helped us win a lot of games.

Here's hoping to more next year.