Periodically, I will take an article from the NFL--specifically, Ravens' beat--press and dissect it for veracity and accuracy. I have done this in the past, on my blog, with Mike Preston because he is so polarizing in his opinions. This time, in looking at the disappointments thus far in the season, Preston asserts that the reason is more than injuries, but that there are some inherent problems in the running of things. Is what Preston asserts true? Or is this more of the Preston Negative Express flying down the decline?

A good friend of mine, fellow Raven fan, said to me a couple of weeks back: "Mike Preston is the most negative person in all of sports."

America needs to meet this man.  It is reminiscent of Howard Cosell, the vitriol people have towards him, and the anger he inspires with his devil-may-care opinions and call outs.

It is hard to deny that the Baltimore Sun columnist is defiant in his demeanor. He seems to revel in a season such as this, where there is a lot going wrong for the Ravens. Then again, to his credit, I have observed that he has been consistent in giving kudos where due. So, I have decided to fact check this latest article, "Ravens can't use injuries as excuse with far deeper problems leading to poor season," from the Sun on Thanksgiving Day of this year.

The operative word here is 'complete.' It's a fair football term that pretty much means balance on offense, and competence on defense, with contributions from special teams. The first thing to pop out at me is a glimpse at the Pro Football Focus (PFF) cumulative statistic for 2015, pre-week 12. (click on the image to enlarge) 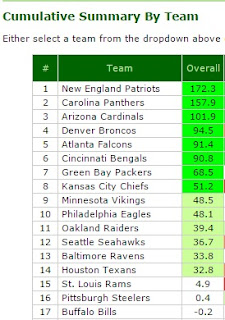 PFF has the Ravens in the top half of the league and above eight playoff qualifiers/contenders including Pittsburgh (16), Indianapolis (23), and Washington (29). This is a measurement of how every player grades out on every play. FYI, more than half the teams in the NFL use this service. So, in their comprehensive evaluations of every Ravens player on every Ravens play of the year, the conclusion is that we are carrying out assignments alongside the top half of the league. That not only cancels out the "haven't played...good" in the statement above, but it will come up later, as well. Note that the green shading means: this team is executing well.

Now, back to the operative word. While it is possible to play a complete game in a loss, I think it's fair to include winning in the definition, as seems common practice in football culture. Of our three (really, four, but don't get me started on Jacksonville) wins, I would look to the Pittsburgh game on the road as a possible complete victory. I've come up with something called the Complete Game Metric--a few measurables, ultimately Boolean, that could define what a complete game looks like, again, according to football culture that I have experienced over the years. The categories: Having a 100+ yard rusher; a 250+ yard passer; Scoring in all 4 quarters; Successful Drive percentage (a score); Holding the other team to under 100 yards rushing (individuals); under 250 yards passing; having a positive Turnover Ratio; getting Sacks; and having at least one big play from special teams.

Let's look at how the Pittsburgh game measured out: 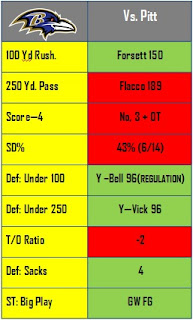 People might disagree but I could not credit Pitt with an individual 100 yard game when Bell needed overtime to reach the mark. Other than that, it is clear that this was indeed NOT a complete game. Too many red categories.

The Rams win was clearly not a complete game, so the only other one to measure thus far is the San Diego win at home. 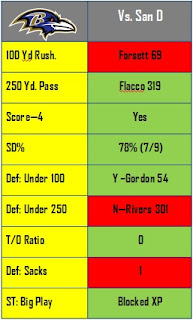 The one real fail is the lack of sacks; Forsett did not gain 100 yards but had an over 4 ypc average. And with Flacco getting over 300 yards passing, this kind of evens out that balance. Rivers had a modest (for him) 301, but their rushing average was low and they had less rushing yards. The question becomes, what constitutes a complete game? Could this count since it is so close, or should all the measurables be satisfied? To compare, let's look at the undefeated Carolina Panthers' win vs. Green Bay: 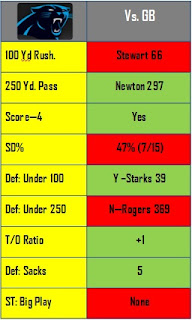 Did they play a complete game? They won handily against an excellent team. Yet, Stewart only got 3.3 ypc. They did not have a good success rate for their drives. They got no big Special Teams plays. But the Carolina Panthers are undefeated. So, is a "complete game" essential for success? To further the point, Carolina would not measure up to this standard for most of their games. Yet, they are undefeated and have beaten good teams. The question becomes, what is Preston's definition of a complete game? A nebulous assertion is both unfair and an inaccurate measurement of success.

MY VERDICT: FALSE.  WHAT'S YOURS?

I will concede that the others included in this statement, Marlon Brown and Breshad Perriman, are deserving of it but for different reasons.  Brown has underachieved.  Perriman is hurt.  And even then, one could argue that he showed a ton of promise in practices before getting hurt, routinely burning the defense for deep passes, according to the Ravens website.

Yet, is it fair to include Aiken on that grouping?  Let's look. 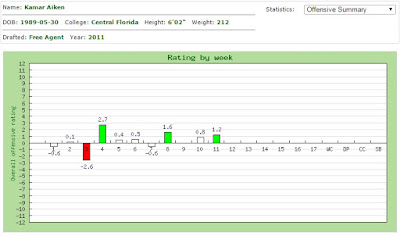 When a player grades out in the green, it means that his play was superlative in terms of carrying out assignments effectively.  Red means the polar opposite.  White is the expected realm.  The chart shows that a good percentage of the time, Aiken has been above and beyond.  Most of the time, he is positively doing his job.  Once, he failed badly, vs. Cincy in week three.

Of note is the fact that both times Steve Smith Sr. went out of the game, Aiken stepped up.

Against Pitt, he had his longest reception (20) and almost half of his 77 yds. after Smith got hurt in the late 3rd quarter, including a crucial 11 yard catch in overtime to put the Ravens in FG position. Similarly, against San Diego, he had 59 of his 62 yards after Smith got hurt in the 3rd, including a crucial 21 yd. Pass Interference call that gave the Ravens position to kick the winning FG.

I don't know what 'promise' Preston was looking to see in preseason, but Aiken clearly not only must have shown appropriate promise, he delivered on it.  And continues to do so.

UPDATE: Aiken scored a TD vs. Cleveland and got Jon Gruden's "Gruden's Grinders" Award for the game.  Preston took another swipe at him in his post game grades, saying he will never be a legitimate number 1," but catching the coach's eye is a legit achievement.

MY VERDICT: FALSE.  WHAT'S YOURS?

This is a conglomeration of points that hit on a similar topic.  Here, I will get into a little of my personal theory on football success.  Over the years, teams that have a high level of success--dynasties/perennial contenders-- have clear leaders:

And then there's the Ravens.  It goes without saying that we had superstars all during our run in the 2000s.  Bold, brazen leaders.
Can you name one like that today?
Flacco is clearly not.  He does not like to lead and get out in front, he seems to allow his play to lead the way.  He doesn't get in guys' faces and he doesn't do pregame chants.  He is low key.  So was Montana.
But Montana had a Ronnie Lott on the D-side.  And a Roger Craig on the O side.  And a ton of others.
All the men in the above list are either superstars, alpha males, or both.  And it is true that the Ravens do not have any like that on the roster currently.  One could make a case for Will Hill, but does his voice get listened to when there is confusion on the back end?  The men appear to simply be arguing out there at times.  One could make a case for Steve Smith Sr., definitely.  But his late-career role is different.  He cannot lead this team by himself.  He has mentored lots of guys, though, and fired people up in a good way.  I believe that Timmy Jernigan is an alpha male and a superstar, but he needs more time and maturity.
So, I AGREE that we need to get more of these types.
What happened to the ones we had?  Did we "purge" the roster of them? 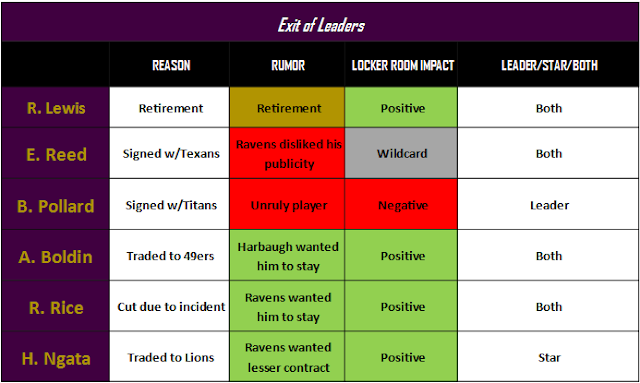 To claim that Harbaugh wanted to rid the roster of Ray Lewis is silly. Moments like this suggest strongly against that thought.  The man retired in a dream-like manner.  Reed, the evidence points to as having worn his welcome--along with the deterioration of his range. He criticized Flacco in the playoffs of 2012, which could not have gone over well.  Pollard got a litany of personal fouls, and was rumored to have been integral in the "mutiny" of 2012.  He had to go, but moreover, he probably never changed his tone of insubordination.  Boldin is a very interesting case.  I don't know why Preston insinuates that Harbaugh wanted to "get rid" of him.  All of the evidence--like here, here, and here-- points to that being the furthest thing from the truth, which is that Ozzie Newsome made him a cap casualty and was the impetus behind the trade.  And think: would Harbaugh trade a troublemaker to his brother?  No way.  Would Harbaugh welcome a troublemaker back into training camp?  No way.  Would Harbaugh interrupt a mission trip with a trade?  NO WAY. (See the above video link) Boldin was shocked by the trade, Harbaugh fought to keep him, Ozzie seemed to be determined to make an example out of him.  I DISAGREE that Harbaugh wanted to purge Boldin.

Ray Rice, another leader, we have heard about ad infinitum.  Again, the evidence points to the Ravens trying to keep him even after the incident.  And finally, Haloti Ngata was more of a leader by onfield effort and attitude (thus categorized as a Star), but was clearly not the victim of a purge by Harbaugh.  He was another cap casualty due to his age/ability mix.  There is no evidence otherwise.

The third tier of this assertion, that we lack playmakers and speed, can be challenged.  Will Hill just made perhaps the play of the year for the Ravens, and even for the NFL (it hasn't happened since 1995) with his Kick-Six return to beat Cleveland.  K. Clay had the 82 yard touchdown punt return in that game.  Clay is a bonafide speedster, as well as KR Raheem Mostert.  Chris Givens is only 27 and known for his speed; his 16.6 yards per catch average is 15th best in the NFL (tie).   Breshad Perriman is pegged by Madden 2016 as the fastest player in the NFL.  Do we need a couple of players here and there? Yes.  Are we void of playmakers and speed?  No way.  I DISAGREE with this claim by Preston.

To sum up this argument,

I AGREE that we need superstars and alpha males to lead.

I DISAGREE that we purged the team of most of these types because of Harbaugh.

I DISAGREE that we lack playmakers and team speed.

MY VERDICT: TABLED: THE RAVENS NEED LEADERS, BUT DO HAVE SOME TALENT.  WHAT DO YOU THINK?

Keep in mind that the initial assertion by Preston is that the Ravens are willing to use injuries as an excuse for this season.  Yet, not only have I seen them do the exact opposite, I have also seen them not concede that the season is over.  It isn't.  They are still in the race (consider that with the "loss" to Jacksonville corrected, they'd be 5-6).

This concludes part one of this article.  Please keep checking for part two, and please post your thoughts and opinions in the Baltimore Beatdown comments section.  Thanks for reading!