This is getting ridiculous...

This post isn't to tell everyone that the Ravens have lost their games purely off of bad officiating, there were many other factors that led to their ultimate defeat in those games. Our failure to prevent big plays and some questionable play calling has led to the Ravens falling short in those games, however, there have been some very head-scratching penalties and game-breaking calls made in a number of games this year. The Ravens know this first hand, as ALL of their games have been within a single score.

If you look at the rest of the NFL the Ravens are not the only ones who have fallen victims to poor officiating, I can recall the Detroit lions loss to the Seattle Seahawks when Michael Bennett tapped the ball out the back of the endzone after Calvin Johnson fumbled on the goal line. The refs missed Bennett tapping the ball out of the back of the endzone and It should've been Lions ball on the 1 and most likely a Lions win. The lions are also siting at 1-6. Monday Night was the last straw for officiating this year. The Ravens were sitting at 1-5 in dire need of a turn around in their season and that was almost the case. I can count 3 calls that had a role in the Ravens loss to Arizona.

1.) Opening drive Ineligible Receiver: On the Ravens opening drive against Arizona, lineman John Urschel clearly reported his eligibility as a potential receiver to the Referee, but the referee was "Distracted on the play" so there was a five yard penalty when Urschel caught the ball on the following play, resulting in a 5-yard penalty that killed the drive and resulted in only a Justin Tucker field Goal.

2.) Chris Johnson 60 yard run after forward progress was clearly stopped: Late in the third quarter Arizona had called a simple draw play and handed the ball off to Chris Johnson who was brought down after a 4 yard rush... Or so we though, Johnson was clearly stopped by DT Brandon Williams although his knee wasn't down on the play he hadn't moved forward for about 2 seconds and then Williams let go and Johnson ran for 60 yards after. The run resulted in a field goal that put the Cardinals up 2 scores going into the 4th.

3.) Jeremy Ross punt return fumble: I must say this was a difficult call but one they had to get right. Up three in the second quarter our Defense made a stop and forced Arizona to punt with a chance to get up two scores at halftime. Ross chose to return the punt but was stripped from behind and was called a fumble. His knee appeared to be down before the ball was stripped from him. 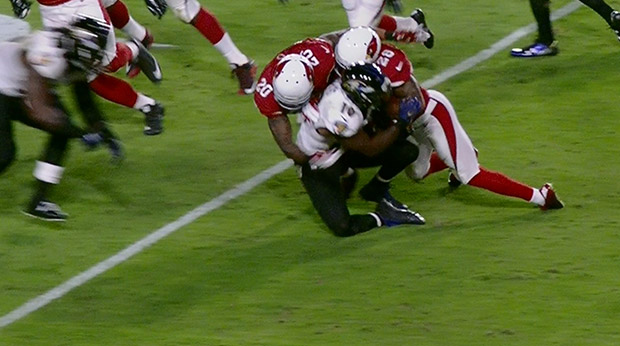 Can you confidently say that this ball was out in this image? To me it appears his knee is down and he still has possession of the ball.

In the end the Officiating needs to be better, and I hope they can fix this soon because bad calls are detrimental not only to the game but to the enjoyment of the people watching it. Nobody wants their team to lose because of bad officiating, it needs to be consistent and even on both sides of the field.