What we've all been waiting for. 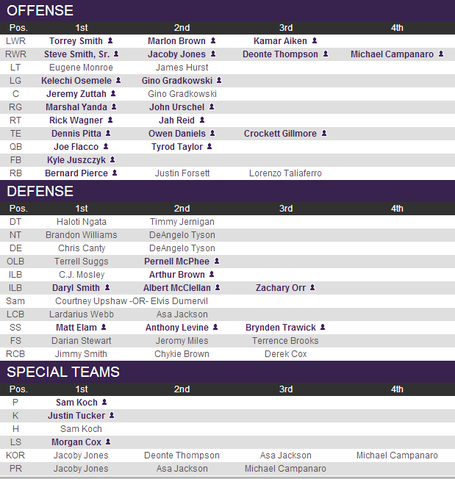 Here's what we spy:
1. Bernard Pierce (huge Fantasy sleeper), will start in Ray Rice's stead for the first two games of the season. The duo shared carries in 2013 (Pierce 152 attempts, Rice 214 attempts).
Pierce average two-tenths of a yard less on his attempts (2.9) opposed to No. 27's 3.1, yet the smash-and-slash style running back turned the ball over twice less (zero) and nicked the starter's first down percentage by a tenth higher. Although Lorenzo Taliafero put in the work to solidify his league's employment status (led the NFL in preseason yards), Justin Forsett is the backfield's top backup. Makes sense.
2. Ravens.com's Garrett Downing wrote that C.J. Mosley is "the first defensive rookie to open the season as the starter since Haloti Ngata in 2006."
I'm not so sure about this move. The Ravens vaulted Daryl Smith's spot on the depth chart; why were the door handles (or hinges) were loosened for others, Arthur Brown and Albert McClellan? Brown, the second-year pro, who was also highly touted entering the league, has lost seven pounds and bulked up this offseason to add onto his speed at the weak side inside linebacker position.
I guessed wrong, but I thought Mosley would sit behind Brown and learn the ropes before hitting center stage.
3. Recently-signed Derek Cox is currently the lone cornerback in the third-string behind Asa Jackson and Chykie Brown. Jimmy Smith and Lardarius Webb have a lot to prove, and will, in 2014. Safe to say Champ Bailey won't dress up in purple this season, unless the Minnesota Vikings sign him.
4. The Ravens' defensive front is thinning like my hair. I am serious. After season-ending injuries to Brent Urban and Kapron Lewis-Moore, the trenches will hold starters Haloti Ngata, Chris Canty, and Brandon Williams. DeAngelo Tyson and the versatile Timmy Jernigan are fresh legs.
2013 produced only 6.5 sacks from four contributors: Ngata 1.5, Canty 2, Williams 1, Tyson 2. The Ravens' linebacking corps produced 32.5 total sacks. Look for the latter number to increase.
5. When will rookie safety Terrence Brooks pass Darian Stewart and Jeromy Miles at the free safety spot? What are your thoughts? Did you see Brooks ahead of MIles? I certainly did. Fill poll below.
6. One clipboard holder behind Joe Flacco, that is Tyrod Taylor. That's gravy. Taylor's top priority is to come in as a game manager if or when his name is called. Head Coach Harbaugh trusts that his backup is capable of doing so. Baltimore is keeping rookie Keith Wenning close, as he was one of the eight signed to the team's practice squad.
Our head coach "loves our team," do you?