In 2011, Dickson appeared to be the Ravens' budding star at tight end, playing his best game against the NFL's gold standard in pass defense. Now, without Dennis Pitta, it is easy to wonder how the Ravens once appeared set at tight end.

Share All sharing options for: #TBT: Ed Dickson's best game as a Raven

On Sunday, the Carolina Panthers travel to M&T Bank Stadium to face the Baltimore Ravens.

The storyline leading up to this game is, as you might expect, predictably centered on the duel between Steve Smith and his former team.

However, there's another, more subtle storyline that is actually interesting for football reasons:  Ed Dickson.

Dickson is a storyline not because he has done anything for Carolina (he hasn't) or because he's ever coming back to Baltimore (he probably isn't) but because of what the injury to Dennis Pitta meant to the team and the bigger picture for Baltimore's once bright future at tight end.

With the loss of Pitta, the Ravens are now facing a severe void at the position, made worse by the loss of Rice and Monroe on offense.

Once, it was not this way.

During the 2010 draft, in Todd Heap's final year, Ozzie Newsome and Co. made two key moves.  While the Patriots were later lauded for their "forward thinking" in building around two first-round caliber talents at tight end in Rob Gronkowski and Aaron Hernandez from the same draft, the Ravens had quietly acquired good tight ends, too, with fewer red flags.

In the second round, the Patriots traded up immediately in front of Baltimore to land Gronkowski at 42. Whether Baltimore had him truly targeted or not we will never know. In any event, they took Sergio Kindle at 43, who would sadly never play a meaningful snap. Patient as always, Newsome took the big-bodied Dickson in the third round. In the fourth round, the Patriots selected Hernandez immediately before the Ravens took Dennis Pitta.

Hernandez is out of the league, Pitta is on season-ending Injured Reserve, and Gronkowski has enough injuries of his own leading us to wonder if he'll ever be the same player.

Forgotten in all this is the fact that once upon a time, there was a budding star as early as 2011 in the Ravens' young third round selection from Oregon.

In 2011, Dickson had the makings of a capable Todd Heap replacement. He made several big plays against Pittsburgh, including a lovely touchdown to finish the Steelers for good in Week 1. He had acceptable production from then out and looked to be a meaningful cog in the passing attack.

In Week 10, following the Ravens' most important regular season win of the year, Dickson came up big against the soon to be infamous Legion of Boom of the Seattle Seahawks.

During the 2011 season, the Seahawks were a middling 2-6.  They lacked a quality quarterback but they still had a great home field advantage and one of the NFL's better coaches, Pete Carroll, who made his mark as a defensive backs coach. The Seahawks in those days would finish a respectable ninth in pass defense.  They were not yet the Legion of Boom but they had all their pieces already in place:  rookie Richard Sherman, Earl Thomas, Brandon Browner, and Kam Chancellor.

Though this is now forgotten, Dickson and Flacco played quality ball against them. This is a largely because the Ravens lost and all anyone could talk about was Flacco's 53 pass attempts and that Ray Rice needed his 20+ touches. In other words, the usual bogus narratives that tended to surface when the Ravens were forced to pass their way back into the game that they would lose.  Never mind that David Reed had two backbreaking fumbles and Cundiff missed two field goals to put the Ravens behind the eight-ball immediately. Never mind that the run game accomplished nothing against a stout Seattle defense.

In 2011, the Seahawks were not yet the league's best defense, but they were close at ninth overall. The Ravens did not move the ball easily against them but they moved it well enough to score points. In hindsight, their performance looks better, now that we know what Carroll was building there. Ed Dickson played a huge role in the success the Ravens did have.

Dickson's Key Plays of the Game

In the second quarter, on just the Ravens second offensive drive, they were already down 10. Leading up to that point, Billy Cundiff kicked a 45 yard field goal -- the problem is that he was 50 yards away so the ball landed in the end zone. The Seahawks converted that great field position into a touchdown.

On the ensuing kickoff, David Reed ran full speed into his own player and fumbled the ball horribly. The defense held Seattle to three points.

In any event, after these mishaps, on the Ravens' second actual drive, they were facing a difficult third and 7 from their own 37-yard line. Flacco delivered a well-placed ball high but at a point where Dickson could go up and get the ball over the oncoming Earl Thomas. 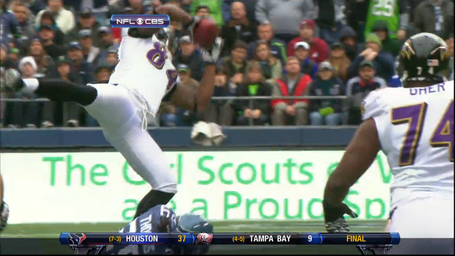 Dickson goes up and makes a fantastic hands catch over the top of Thomas for a 15 yard gain. This catch would prove pivotal.

Several plays later, facing third and two from the Seattle 26, Dickson and Flacco connected for a six-yard catch to convert. Dickson runs a good route just past the sticks but Flacco is unable to fit the ball in there due to a closing Seattle linebacker. Dickson slides left with a scrambling Flacco to get open for the first down catch.

On an ensuing third and 10, Baltimore needs a conversion to avoid settling for a field goal. Flacco evades an impending pass rush and steps up to make a big-time throw over the middle in between three Seahawk defenders.

Dickson skies upwards and makes another fantastic hands catch for the conversion and nearly the touchdown. 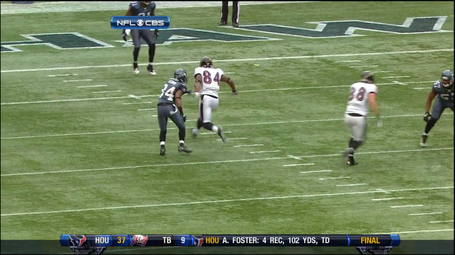 One play later on second down, Flacco hands off to Ray Rice who reminds us that he is left handed by throwing a touchdown pass to Ed Dickson in the back of the end zone on a brilliantly conceived play.

Just like that, the Ravens are back in it on their second drive, after a forgettable first quarter.

Unfortunately, the Ravens could not get out of their own way, making enough mistakes to practically put them out of the game.

After yet another David Reed fumble leads to Seattle points, the Ravens have the ball back driving to end the half. Cundiff misses another 52 yarder by at least 10 yards wide.

Down 22-7 early in the third quarter, the Ravens were practically forced to abandon the run, having had little success with it and needing to get back in the game after a first half of screw-ups. They did not have much success here, gaining just a field goal for their efforts.

With nine minutes left in the fourth quarter, Baltimore would get it going. Facing an ominous 3rd and 18, Flacco and Dickson hook up for 13 yards. Flacco converts the ensuing fourth down with his legs.

A few plays later, on first and 10, Baltimore is within striking distance. Dickson carries the seam against a shallow linebacker and another defensive back playing Cover 4. Earl Thomas takes the deep right against Torrey Smith, leaving Dickson to split the coverage in the seam. Flacco delivers a beautiful ball in between both defenders up the seam to hit Dickson deep in the end zone to bring the Ravens within five.

That touchdown pass doesn't do Dickson justice though. In the second gif we see Dickson make a subtle swim move past Malcolm Smith, the future Super Bowl XLVIII MVP.  It's a small thing but it puts him past Smith who attempts to desperately jam him.

Too late. Dickson has a step on him, Flacco delivers the ball where only Dickson can catch it and that's all she wrote.

The Ravens had a great chance to snatch victory from the jaws of defeat but it was not to be. It would be unfair to say the Ravens defense failed to get a stop here to get the offense the ball back. After all, they were the only reason the Ravens weren't down 30-17 instead of 22-17. The defense played huge all day under trying circumstances. Ray Lewis, fighting a big turf toe issue, along with Jarret Johnson failed to bring in Marshawn Lynch on the decisive play of the game. Alas, the game would end in defeat with Baltimore not getting another possession.

The narrative afterward was as you'd expect but all of it failed to miss the fact that Baltimore (or more accurately, David Reed) put the team in dire straits. Needing to pass their way into the game, Flacco and Dickson gave Baltimore a chance. As Greg Gumble noted, Dickson had a monster day, finishing with 10 catches on 14 targets for 79 yards and two touchdowns.

Sadly, this would be the last meaningful performance Dickson would provide Baltimore. From then on out, Dennis Pitta would begin to eclipse him. By 2013, it was apparent that Dickson was finished in Baltimore as he had either lost his skills or lost his confidence and needed a change of scenery.

As we go into our game against Carolina with a huge void at tight end, it's easy to wonder how at one time, it looked like we were set at tight end for the next five years.