Terrell Suggs takes one for the team

Suggs was fined for his gladiator mask during player introductions last Thursday evening.

Share All sharing options for: Terrell Suggs takes one for the team

In what was perhaps the most distracting week in Ravens history, Terrell Suggs stepped up as a leader in the locker room to keep his teammates focused in an unorthodox way.

With the aftermath of the Ray Rice scandal swarming around Ravens team headquarters, Suggs was able to keep his teammates focused on the rival Pittsburgh Steelers and tried to keep their minds from wandering elsewhere. 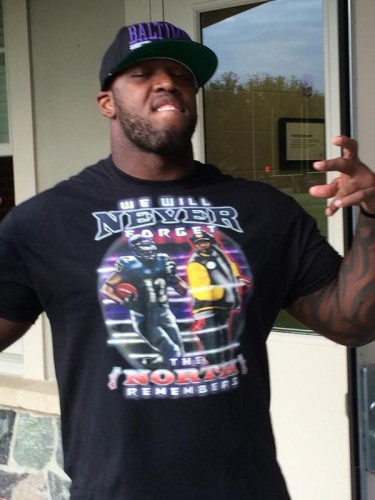 Suggs' wardrobe would continue to evolve, eventually leading to him to receive a fine from the league a few days ago. During player introductions, while everyones mind was focused on Ray Rice and the fallout from the Ravens, Suggs brought his teammates back into the war that was about to happen on the field.

Suggs would enter the game in a gladiator mask.

In total, Suggs was fined $5,512 for a wardrobe violation per NFL rules. Suggs undoubtedly knew a FedEx envelope would eventually arrive in his locker, but wearing a mask an unselfish act by Suggs to let his teammates know they had a job to get done on the gridiron.

There's no textbook on leadership skills in the NFL, but what Suggs did had to have played into such a sound performance by the Ravens in their eventual 26-6 win over the Steelers during such a circus of a week. Nobody would wants to get fined thousands of dollars for their actions, but for Suggs, wearing his gladiator mask was an investment in the correct mindset of his teammates.

If you asked Suggs, I'm sure he'll say it was money well spent.