Share All sharing options for: #TBT: Haloti Ngata and the 2006 Draft

On Sunday, the Ravens travel to First Energy Stadium to play the Cleveland Browns.  In that entourage goes Haloti Ngata, one of the Ravens' most essential players for the past eight years. An exceptionally strong and agile athlete for a defensive lineman, Ngata comprised a triumvirate of elite players along with Ray Lewis and Ed Reed featured through the middle of the Ravens' defense.

As a consensus All-American in 2005 and Pac-10 Defensive Player of the Year, Ngata racked up nine sacks in 12 games in his junior year at the University of Oregon. He was the second highest defensive lineman taken in the draft following Mario Williams, a defensive end drafted #1 by Houston. 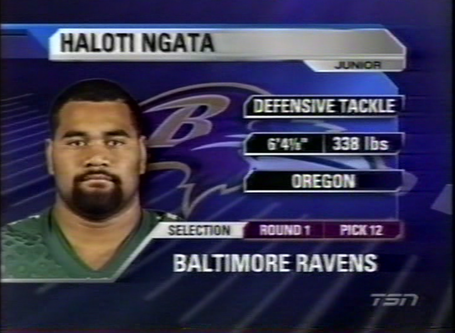 The origins of Ngata's arrival in Baltimore

Ngata's selection with the 12th overall pick was the result of an unusual trade between division rivals. The Ravens would send Cleveland a sixth-round pick for the rights to move up from 13th overall to 12th.

Daniel Jeremiah, currently a scouting analyst with the NFL Network, was one of Baltimore's scouts at the time who played a major role in arguing for Ngata's selection. He noted that had Ngata not been available, Baltimore would have selected Nick Mangold, the current center for the New York Jets.

Taking OG/C top 15 is interesting topic. In Baltimore, we had a long debate in 2006 about Nick Mangold. If Ngata was gone, NM was our pick

This is interesting given that Mangold would not be selected until 17 picks later at 29.  Perhaps Baltimore would have attempted to trade back in that instance.

Fortunately, Ngata was there and the rest is history. The pick was widely hailed by the ESPN crew in Radio City Music Hall. Tom Jackson and Mel Kiper Jr. spoke highly of Ngata, believing he was an immovable force in the middle and a penetrating run defender with considerable upside as a pass rusher. As the cliché goes, there are only so many 330-pound men on this earth who have such otherworldly athleticism.

Ngata certainly seemed happy about his selection from his camp in Las Vegas: 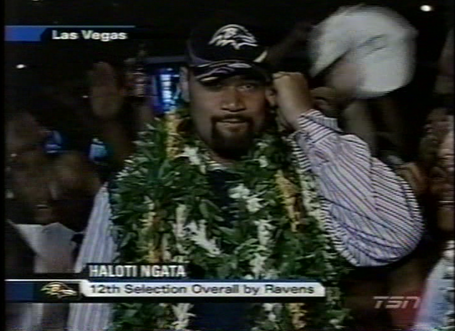 Undoubtedly the pick pleased Ray Lewis as well, whose none too subtle comments about his desire to be kept free from blockers were made widely known leading up to the draft.  Lewis longed for the days of the 2000 season when Sam Adams and Tony Siragusa ate up blockers at the point of attack, enabling the NFL's premier playmaker at linebacker to stop runners.  Ngata would fill this role at an elite level. 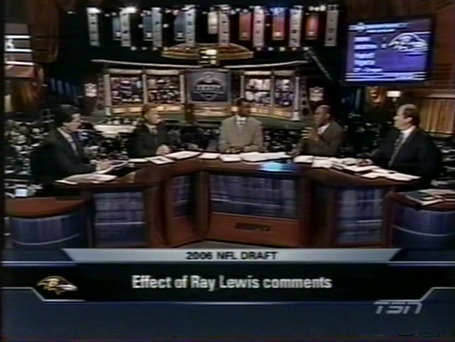 Not everyone liked the pick though. Mark Schlereth, former Denver Broncos offensive lineman and current studio anchor with ESPN, panned the selection, speaking strongly that Ngata too often took plays off at Oregon, lacked suddenness, and failed to control the line of scrimmage. "I hated the pick", said the guy whose primary claim to fame was blocking for John Elway. Thanks, Mark. This is Ngata at Oregon running down a receiver in the flat: 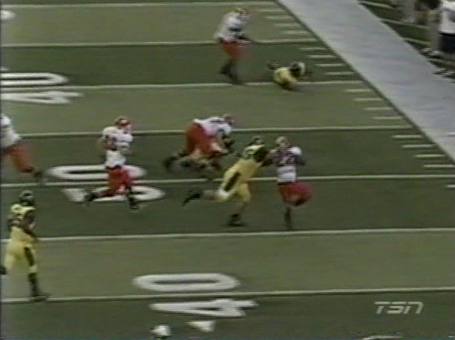 Schlereth's criticism seems silly now in hindsight given Ngata's dominance for years on one of the NFL's elite defenses of the late 2000s who routinely kept the Ravens in the playoff hunt. However, Jeremiah did believe though that Ray Lewis played a pivotal role in Ngata's immediate contribution and maturation as a player.

Ray Lewis deserves a lot of credit for the development of Ngata and Suggs. His work ethic rubbed off on both guys

Ngata was an immediate starter and force of nature with Baltimore, helping the Ravens run out to a dominant 13-3 record on the backs of a suffocating defense, which led the league in virtually every defensive category, including sacks and interceptions.

Space-eating tackles are useful but at the end of the day, if you are big, beefy, and can occupy gaps, you are basically fully qualified for the position. What separates the Haloti Ngatas from the rest of the chaff is the ability to deliver penetrating pressure to create negative plays. Before there was J.J. Watt, there was Haloti Ngata.

In 2010, Ngata was rated the Ravens' best player by Pro Football Reference's Average Value statistic, which is an attempt to assign a better value to an individual player in lieu of using questionable metrics like Pro Bowls or Games Started.

In 2011, PFR again rated Ngata as the Ravens' most valuable player by Average Value even though Terrell Suggs won Defensive Player of the Year for his outstanding 2011 campaign. He lived in the Steelers' backfield during the 35-7 domination in Week 1, directly causing two turnovers. He would make first team All-Pro in both the 2010 and 2011 seasons. This is why Ngata was given a massive 5-year $61 million deal.

During the 2012 Super Bowl, Ngata's injury was the catalyst for the San Francisco 49ers comeback.  Following the bizarre power outage, Ngata's knee was rolled up on during Frank Gore's touchdown on a counter run to make the score 28-20. From that point on, the Ravens struggled to play run defense, allowing Gore to gash them for huge gains. Ngata's absence was sorely felt but Baltimore managed to hold on in the clutch.

For his career, Ngata has racked up an excellent Average Value of 88, good for 26th among active NFL players and tied with Demarcus Ware.  Among all NFL players in the database, Ngata rates 233rd - he has his work cut out for him to reach Ray Lewis who is tied with Jerry Rice at second overall. Among all Baltimore Ravens, Ngata has the fifth highest Average Value to date.

Where are they now?

While Ngata has led a distinguished career in Baltimore since 2006, the lasting impacts of the trade extend beyond 2006 for the Cleveland Browns.

With the 13th pick, Cleveland selected pass rusher Kamerion Wimbley, undoubtedly their target all along.  Wimbley would have four productive seasons punctuated by an 11-sack season in his rookie year for the Browns.  After the 2009 season though, Cleveland traded Wimbley to the Oakland Raiders in exchange for a third round pick, 85th overall.

With that 85th pick, Cleveland selected Colt McCoy in the 2010 draft. Colt McCoy would have three forgettable years in Cleveland before taking on backup duties elsewhere.  Wimbley would later find himself in Tennessee where he will likely finish his career.

By any stretch, Ngata has been one of the most dominant players in the league for years and certainly one of Baltimore's most popular. On Sunday, Ngata will revisit the team that made his arrival in Baltimore possible.