The Fantasy Football gods' wrath is at full blast already: Daniel's squad is obliterated by 47 points courtesy of "Waka Flacco-Flame" and to make matters worse, nearly everyone on The Krap Sheet is injured for Week 2.

Share All sharing options for: Life of the Unluckiest Fantasy Football Team Owner:

People dread waking up Mondays and then there's me, struggling to get out of bed with the hefty butt of the world sitting on my chest every Tuesday morning. Alarmed by the "Duh-nuh-nuh! Duh-nuh-nuh," (the SportsCenter update tune), relaying me the "news" that I wish they started calling "olds."

I lost. I lose. I am losing. Reminds me of that one time I accompanied my Korean friend to his English as a Second Language class. What have I done to deserve this? I currently have my team yelling "47!" in practice like the Broncos did this offseason and hope that will inspire them to put up better numbers this weekend. 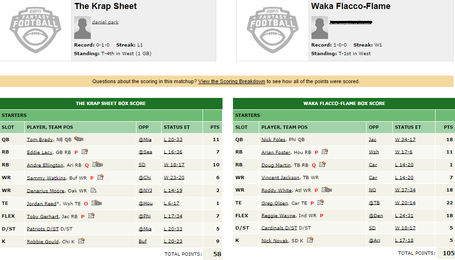 New England's loss in the opener was its first since 2003, of course! The Dolphins recovered two fumbles and recorded four sacks in their second-half onslaught of the Pats. Eddie Lacy suffered a concussion in Seattle. Andre Ellington shone bright against a tough Chargers defensive front but wasn't running full speed due to a foot injury during Thursday's practice. Sammy Watkins and Denarius Moore have developmental quarterbacks. By the time my team is 2-8, EJ Manuel and Derek Carr will be too late to rescue me out of the well. I've nothing to say to Jordan Reed and Toby Gerhart, the two top fantasy football commodities this offseason. 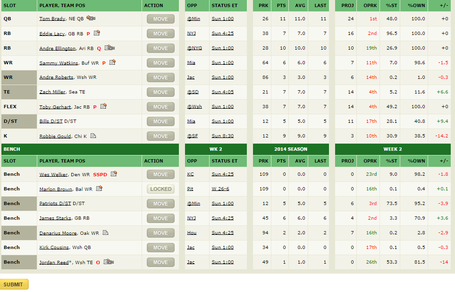 Eddie Lacy has been fully cleared and will play in the Packers' home opener vs. the New York Jets. The Jets defense leads the league against the run and gave up 26 yards against Darren McFadden (15) and Maurice Jones-Drew (11).

I made a couple of life decisions. Houston's defense (or Texas' Terror Squad), trashed Robert Griffin III and the Redskins' offense on Sunday. As long as Darrel Young isn't there to make ESPN's Not-So Top 10 Plays highlight reel, then Andre Roberts has a better chance of torching the Jaguars defense (as opposed to hoping Moore has a solid game against J.J. Watt's team).

An inkling tells me to start the Bills defense over the Patriots this Sunday. What are your thoughts? I can only dream -- Matt Cassel shows up with blue fire in his eye sockets that say, "Tom, I've been good all these years without you."

Cassel hooks up with Cordarrelle Patterson for three touchdowns and 180 yards.

I officially convinced myself to bench the Patriots D. So long, Reed, nice knowing you. Zach Miller, I trust ... you to get open this week.