Thanksgiving 2004 saw two of the AFC's top teams vying for supremacy in a matchup that would be just the first of many.

Share All sharing options for: TBT: Thanksgiving 2004 - Ravens at Patriots

2004 was the lone season in which Kyle Boller played all 16 games.  We get to see all the Kyle Boller glory we could ever want in this game.  If ever one should find themselves doubting Joe Flacco's value to the team, I ask you to watch this game.  You'll come running back to Joe like Cleveland fans did to LeBron James.

Boller came into this game hot with two consecutive games of 100+ passer rating and the Ravens were looking strong at 7-3.  Pittsburgh and New England were both 9-1 entering the week meaning Baltimore looked like a solid bet for the wild card.  Here was the AFC Playoff picture: 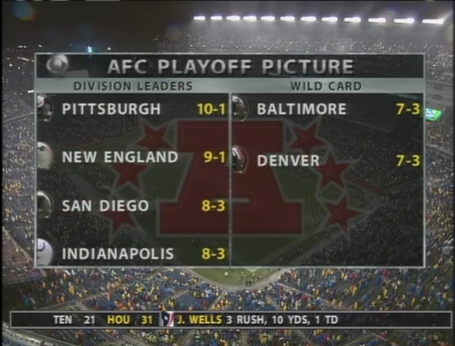 A win over a powerhouse like New England would have said a lot about whether these Ravens were ready for primetime after falling short in 2003.  Let's get to it.

Little of significance happens in the first half other than Kyle Boller looking like Kyle Boller and the Ravens offense generally looking inept with Jamal Lewis sidelined.  The defense came to play however and their reputation preceded them.  They were giving up just 14 points a game to that point, best in the NFL.  With that said, let's take a look at the lowlights!

On the Ravens' first drive to start the game and facing third and 3, Boller checks down on an absolutely dismal and predictable pass to the flat.  Not one but TWO Patriots are waiting for him: 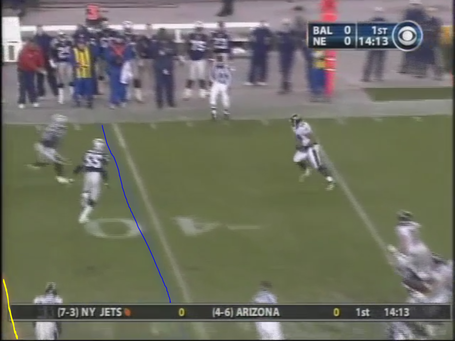 Note the scrimmage and first down lines.  Alan Ricard has a better chance of metamorphosing into a butterfly than making this first down.

New England gets the ball deep in their own territory.  With the ball at their own 2-yard line, Terrell Suggs gets fantastic penetration, splitting the tackle and tight end.  He has an easy safety except he's blatantly held on the play and it's not called: 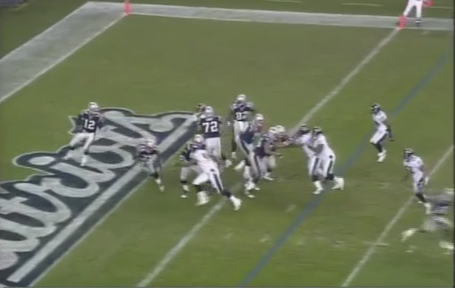 In this shot, Suggs has already beaten the tackle #72 as the tight end looks on in horror. 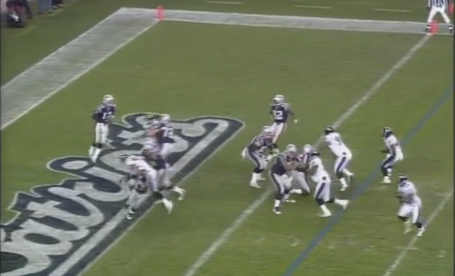 In the second shot, we see #72 mugging Suggs from behind and still nothing is called.  I don't know how it gets any easier than this but the referees miss it.  Brady makes them pay.  He hits Patten deep downfield for a big 38-yard gain just out of Ed Reed's outstretched hands: 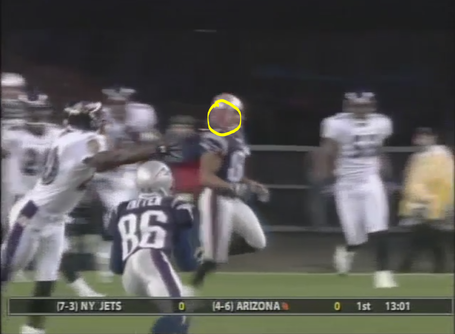 The Patriots would fail to convert their next first down leaving Baltimore with the ball at the 27.

Much to the surprise of everyone, Baltimore converts a first down with a short pass to Travis Taylor.  Hey, remember him?  Yeah we picked him five spots after Jamal Lewis in the 2000 draft at 10th overall.  I advise you not to look up his career statistics.  They're not pretty.

On the next third down, Kyle Boller demonstrates what has to be the most hilarious pump fake ever en route to a first down scramble: 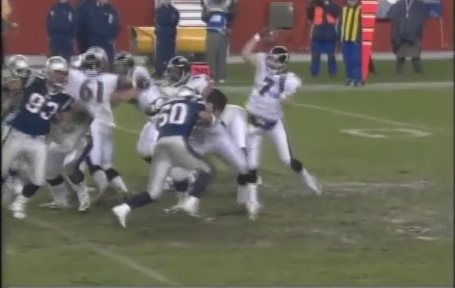 Somehow, he doesn't fumble the ball on that over the head pump fake with the muddy glove on.  He gets the first down though!  Sadly, it doesn't matter.  Here is the very next play: 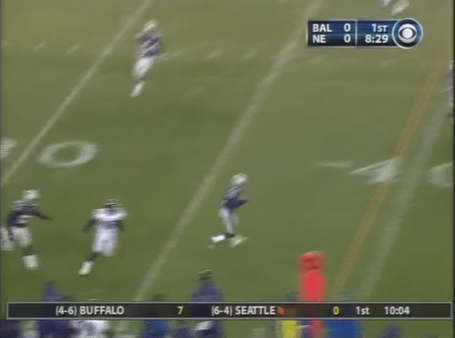 That grainy image doesn't do justice to just how bad an interception this is.  It's as if Boller never sees Randall Gay sinking into coverage to deny the out route.  Whatever the reason, it's a brutal interception.

On the ensuing drive, Baltimore is facing third and five.  In a real sign of confidence, Baltimore calls a delayed inside draw.  The receiver fails to make a block and Taylor is met far short of the line to gain: 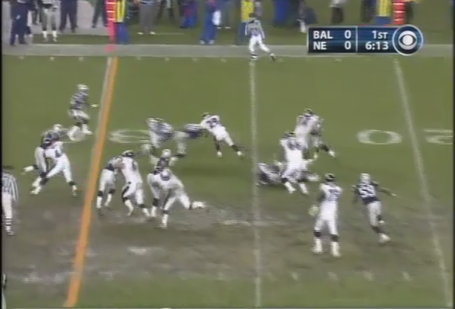 The Patriots get the ball back with decent field position.  Their first down pass gets blown up by Suggs throwing off the left tackle like a rag doll: 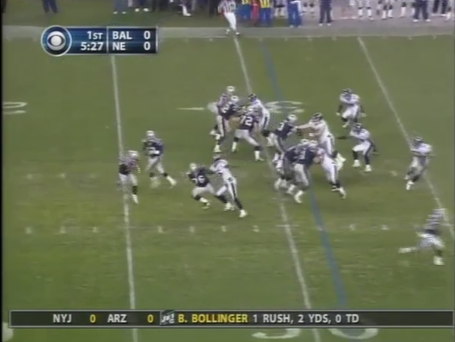 The tackle is basically thrown down with one arm as Suggs steps over him to force Brady to throw the ball high and outside.  The Patriots later score a field goal.

Lest you think we haven't had enough Travis Taylor lowlights here's another gem.  In one of the few Baltimore plays to go deep, Boller throws to Taylor on a go route for the end zone.  The ball is not well thrown with enough loft or on the outside shoulder but Taylor could have made a much better effort: 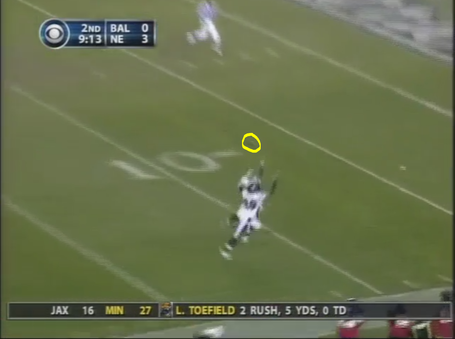 That's not helping your quarterback.  Sure, Taylor should expect a better ball but a receiver can do more than that.  In fact, you may remember a similar throw from 2012.  It went like this:

Fast forward to the two minute drill, the Patriots commit several penalties to set the Ravens up with great field position at the 18 with 0:30 left in the half.  Here are the rest of the plays: 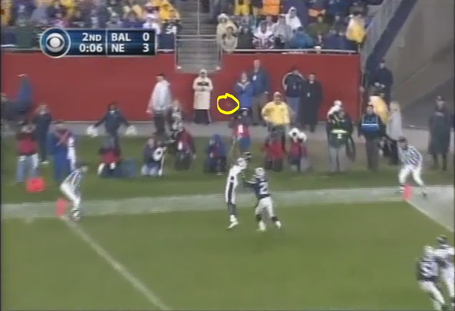 The ball isn't the worst throw ever and a better receiver probably finds a way to bring it down.  Randy Hymes is not that receiver. It's basically a jump ball and you need to do better against a team like New England when you have barely been able to even get into field goal range all day.  Here's the aftermath: 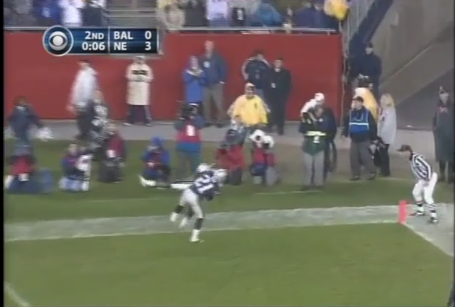 Yep, Hymes' chances of bringing this ball in were about as good as the camerman's unless he makes a great high point contested catch and toe taps.  Instead, he just sort of pathetically falls over out of bounds without the ball.

The Patriots take the ball first.  Brady throws deep down the seam where the defensive back has perfect coverage.  Ray Lewis has excellent coverage, too, but is looking away from the ball and inadvertently prevents an easy interception.

The Patriots gain some momentum, reaching the red zone a few plays later.  On second and short, Ed Reed sticks Corey Dillon in the backfield, halting the drive: 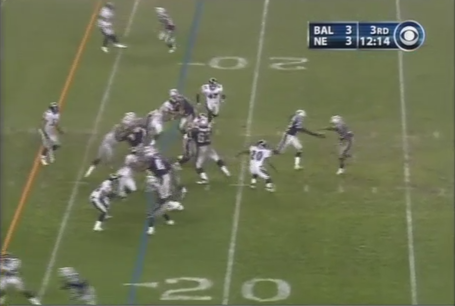 The Patriots fail to convert the now long third down setting up another field goal.

After the field goal, Baltimore gets the ball back and after a holding penalty on the kick proceeds to engage on an ugly three and out.  On third and short, Boller throws a predictable pass to Chester Taylor in the flat which Tedy Bruschi sees coming a mile away and sticks him for a five-yard loss. 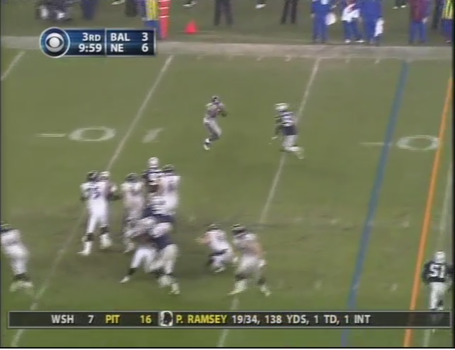 This is a play with a better chance of scoring a triple in baseball than becoming a first down.  Just terrible.

On the ensuing drive, Corey Dillon proceeds to run all over the Ravens tired defense.  On second and eight, Brady throws a beautiful deep ball for a touchdown to David Patten.  However, the referees, mindful of the increased emphasis on pass interference renewed in the 2004 offseason catch Patten with an obvious push off and nullify the TD. 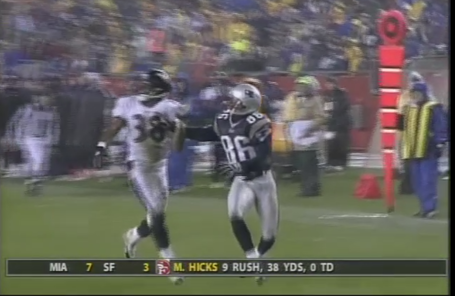 After a holding call on New England, the Patriots are facing a massive second and 33.  They gain enough yards to set up 48-yard field goal from Vinatieri in the mud and rain who makes it look easy.  At the rate the Ravens are playing offense, one field goal a quarter from New England practically feels insurmountable.

The Ravens drive fails to accomplish anything except nearly give the ball away.  New England gets the type of friendly call on their ensuing drive that gives cause for Bart Scott's loathing for the referees during games between these teams.  Bart Scott hits Troy Brown while he still has one foot in bounds and is called for the worst late hit call seen in a while.  Observe: 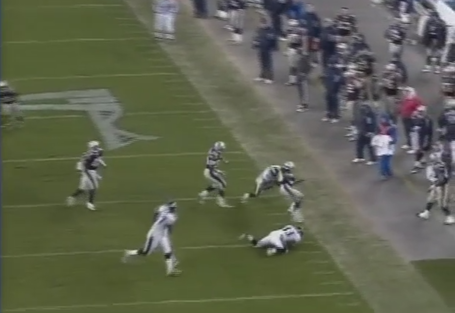 Brown is still in bounds at the point of contact.  Brown's teammate though does a fantastic acting job of desperately asking for a flag.  The referee obliges.

The bad calls continue against Baltimore.  Later in the drive, Adalius Thomas has perfect coverage on the New England running back slipping out on a wheel route.  With the ball already in the air on a back shoulder throw, the receiver is way too late trying to turn for the ball and attempts to throw his body through Thomas.  As he falls, the referee throws a late pass interference flag and states that Thomas didn't play the ball even though he obviously was.  Note the receiver trying to push backward through Thomas in the space he occupies: 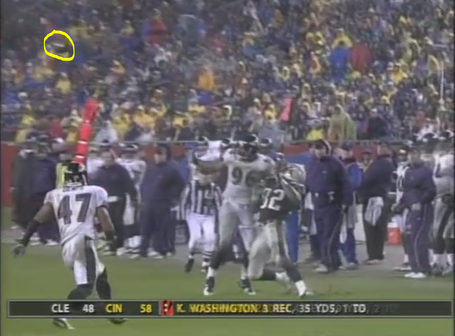 It's a close call at first glance but on replay its obvious the receiver is not on the same page with Brady.  It has no chance of being completed.

Armed with a fresh set of downs though, the Patriots would capitalize.  Dillon runs the ball a short time later from the three-yard line for the backbreaking touchdown.

This game is already tiresome so let's get to the dagger.  Facing second and 20 deep in their own territory, Boller drops back and narrowly avoids a sack from an unblocked rusher while slipping on the mud.  He flails around and is strip sacked by a second defender where the Patriots recover in the end zone.  No image is required of this one.  The rest of the quarter would feature a few limp drives of running plays to wind the game down.

Well what can you say that hasn't been said already about Kyle Boller?  He wasn't good.  In fact, at no point could you watch this game and really come away feeling as if Baltimore had any hope of winning.  Baltimore had -22 yards of offense in the third quarter.  The game was much closer for three quarters than the final score indicates but even so, you cannot watch this game and truly have thought Baltimore had even one much less two touchdown drives in them.

The defense played very well, especially future Defensive Player of the Year Ed Reed, who was all over the field.  The lone touchdown drive allowed came on two bad calls helping it along.  Yet just about the only thing you could hope for was two fluke defensive touchdowns to enable the team to pull out the win.  Because the offense did nothing to inspire confidence.

This game would essentially expose the 2004 Ravens as a team that could play great defense but not really threaten anyone offensively.  I wrote before how the failed trade for Terrell Owens was a major setback that would have probably altered this season's outcome.  The 2004 season would end we know with the Ravens collapsing to 9-7 after a hot 7-3 start and narrowly missing the playoffs.  New England would go on to win it all.

Games like these are annoying to watch, at least on offense, even 10 years later.  However, it's comforting to remember that our quarterback and coaching situation has much improved.  We go into most games knowing that we can and often should win.  That's a hell of a lot better situation to be in.