A couple of Ravens fans come up with unique way to announce they're having a baby via Facebook.

When you invest as much passion and energy into a football team, it's not a far-fetched thought to care about some of the players as if they're family.

Recently, some expectant parents (and Ravens diehards) decided to take the whole "family" thing to another level and had wide receiver Jacoby Jones deliver some life changing news to their friends and family on Facebook.

The idea of Jones "delivering" the birth announcement was "born" (okay, enough birth puns) one day when father-to-be, Nate Smythe, was thinking of a way to combine his love for family and football. Armed with the idea, he just needed to get permission from his wife, Jessica.

"My wife is probably a bigger Ravens fan that all of us put together," Smythe said. "She was absolutely all for it."

The video was recorded earlier this summer aboard the AAA Ravens fan cruise. Unable to attend because of his work schedule, Smythe's cousin was on board and met up with Jones for the request.

Having met Jones on multiple previous occasions, Jones knew exactly who Nate was. As a side job, Smythe often DJ's player events and as you would expect with Jones in the room, he's a dream guest on any dance floor. Smythe has played multiple events with Jones and other Ravens players including after parties for the Lardarius Webb Foundation and the most recent Ed Block Courage Awards.

"He remembered me from all the events we happened to be at together, so he was happy to do it," Smythe recalled when asked about Jones' reaction. "He's such a class act and a good dude."

While the birth announcement will be something the couple will remember forever, it's not the only family-related interaction Smythe has with Ravens players. Smythe has literally bled for his team and it just so happens that he found another way to mix family and football together.

"My dad worked two jobs, so we were never close," he said. "The only time we EVER did anything together was watch Ray Lewis play on Sundays. My dad has had cancer seven times and now has pancreas cancer AND leukemia at the same time. He's almost gone."

Looking for a way to memorialize his father forever, Smythe proposed getting his father's picture tattooed on him.

"Instead of getting his picture, my father suggested I get Ray," he said. "It would symbolize what brought us together as a father/son and best friends. He's my hero and Ray is his hero." 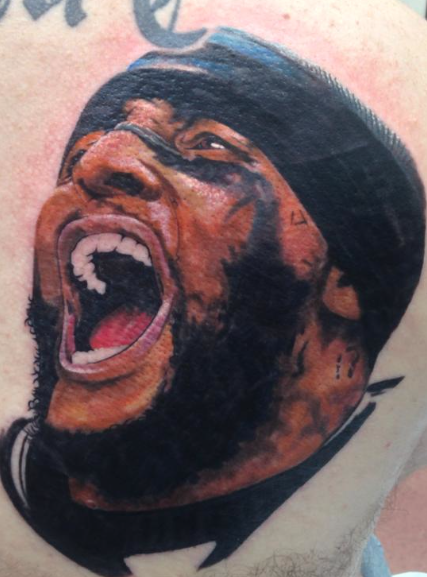 Over the summer, Smythe ran into Lewis during one of his speaking engagements. Their meeting was memorable for both of them.

"I showed Ray the tattoo and told him the story," he said. "Ray started to tear up. it was unreal."

Congrats to both Nate and Jessica on the upcoming birth of their child and on behalf of Ravens nation, we're pulling for your father to keep fighting something he's beat so many times previously. Life and family are far more important than football, but when you're able to bring two of your biggest passions together, great things can happen.