Construction for Ray Lewis statue is underway in Unitas Plaza

Share All sharing options for: Construction for Ray Lewis statue is underway in Unitas Plaza

For months the fine folks over at BaltimoreRavens.com have been teasing us with the unveiling of the Ray Lewis commemorative statue to forever guard the gates of M&T Bank Stadium.

Now that we know the statue is complete, it's just a matter of when the statue will be revealed. After walking through the stadium area following a game during the past Orioles homestand, it appears the unveiling will happen a lot sooner rather than later. 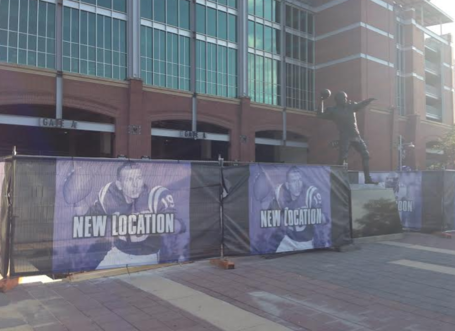 Back in March, Ravens owner Steve Bisciotti revealed to the Baltimore Sun that Lewis would join legendary Colts quarterback Johnny Unitas in Unitas plaza. It appears that Unitas will be moving slightly left while Lewis will be anchored to the left of the current statue.

It's not often you could ask a legend to move over, but as is the case in Baltimore with Lewis and Unitas, it just makes sense to have them side by side. After the 13 years of heartache Baltimore had without a football team, the symbolism of legends from the past and present regimes of NFL football in Charm City is something I'm really looking forward to.

As for when the actual unveiling will occur, it'll likely take place prior to the September 7 opener against the Cincinnati Bengals. The liability of having two huge giant holes in the ground in a high foot-traffic area could also mean that the statue will be unveiled even sooner than that.

Whenever the official announcement is made, we'll be sure to keep you informed.