ProFootballFocus has released their annual depth charts for each team that includes where they expect players to be and where they rank in terms of quality.

ProFootballFocus has released their annual depth charts for each team that includes where they expect players to be and where they rank in terms of quality. 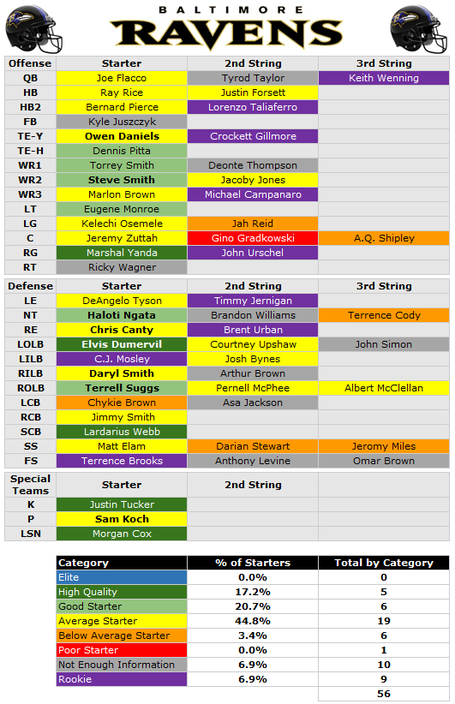 As you can see from the color coded chart above, there is a fair amount of green there and very little orange or red, which means that PFF clearly thinks that we have a solid squad. However, there are no blue players which means that clearly PFF doesn't think quarterback Joe Flacco is elite.

Ultimately there are very few surprises outside of Ray Rice being labeled an "average starter" even though he had one of the worst yard-per-carry averages in the league last season. PFF based the decision on the terrible offensive line play and the hopes that Rice just had a bad year and that it isn't the slow decline that most running backs see in their career.

Interestingly, they gave the inside linebacker job to rookie C.J. Mosley instead of Arthur Brown. Personally, I think that the players show different skill sets and will be rotated out, but they give the chart nod to Mosley since he is a first round pick this year. Another good roster battle is at the free safety position where they hand it to Brooks as the "logical choice" but do mention that Levine or Brown could make a sudden case for themselves to get the starting nod.

The only red flag they gave was to 2013's starting center, Gino Gradkowski which isn't too awfully surprising given the way that Gradkowski was pushed around last season and his pretty certain demotion after the Ravens traded for Jeremy Zuttah and signed him to an extension. They do note that A.Q. Shipley has a better grade but is still behind Gradkowski on the depth chart mainly because Shipley is a pure center and only look outmatched due to playing a new position in guard last season for the Ravens, while looking fine as a center for Indianapolis in 2012.