Passing Yardage is often used as the defining metric of a quarterback. Flacco is sometimes noted for never having thrown for more than 4,000 yards in a season. However, the numbers show that yardage is one of the most meaningless thresholds in football.

Share All sharing options for: Ravens quarterback Joe Flacco and the 4,000-yard fallacy

Baltimoreravens.com writers Ryan Mink and Garrett Downing conducted a mailbag answering questions about whether Joe Flacco would make a Pro Bowl and or throw for 4,000 yards – two "accomplishments" he has not yet achieved.

It’s a fairly standard, innocuous question catered to the casual fan but unfortunately, it’s also the wrong question to even answer.

Previously, I illustrated in a statistical review of football metrics, that cumulative yards is one of the most meaningless statistics in football in relation to winning games, with a correlation of just 0.31. Moreover, passing attempts are even worse as they are negatively correlated with winning. In other words, the more often you pass, the less often you win and even more interestingly, the winning QB is more likely to have fewer passing yards.

We know why this is true: when a team is behind in the game, especially if it’s down by more than one score, and the clock begins to wind down, the team must get desperate and pass repeatedly to get back into the game. When a team is winning, it will run the ball to kill clock, avoid clock-killing incompletions, and play good defense.

Yet, guess what is the number one way to achieve "4,000 yards" or some other cumulative passing statistic? Pass early and often.

Unfortunately, this is not what teams want to do if winning games is what they value. What we found in the statistical review was that passing efficiency was the much more valuable statistic to evaluate winning.

Some say Peyton Manning had the best passing season in NFL history in 2013. I’d argue it wasn’t even Manning’s personal best. That would be 2004, when he threw 49 TDs, a stunning 8.74 NY/A, and just 4,500 yards. His 5,477 yards in 2013 is a record but 5,000+ yards has been done multiple times in the past three years alone and it took all of them 600 attempts or more to do it – more amazingly still was that none of them won the Super Bowl that year. The only one to do it in less than 600 attempts was the great Dan Marino, who also happened to lose in the Super Bowl to the 49ers.

It may surprise you to learn that the season in which the Saints won the Super Bowl (2009), Brees passed for 4,300 yards in 15 games, which when projected for 16, is 4,680 yards. However, the Saints generated 39 turnovers, the second best rate of any team in the NFL. They needed all five of them to beat the Vikings in the NFC Title game and a game-changing pick-six to beat Manning in the Super Bowl.

The truth is, it is better to pass 36 times for 235 yards (6.52 Net Yards/Attempt) than 54 times for 320 yards (5.9 NY/A) even though most casual and non-statistically minded observers would simply look at the yardage and conclude that the 320 yard passer had a better day. In such an example, the first QB is almost always the winning one.

If those stat lines look familiar that is because they were Flacco’s and Brady’s net passing stats from the 2012 AFC Championship which Baltimore won 28-13.

Much has been made of Flacco’s "inability" to throw for 4,000 yards but such a statistic has never meant much of anything. Instead, it’s usually an indicator of a pass-first offense built around special receiving talent, which the Ravens have never been, and frankly, have never tried to be, except in 1996 when they led the NFL in virtually every major offensive statistic. They won four games that year.

Successful pass-first offenses either feature an unusually gifted and rare QB talent (like Manning) or they have the coach, scheme and offensive playmakers to do it. Brees is a great example because although he has been an elite QB for years in New Orleans, he was anything but elite in San Diego.

Brees passed for no more than 3,500 yards in any season in San Diego, averaging no better than 220 yards a game in a year. When he joined Sean Payton in New Orleans in 2006, Brees shot up almost 1,000 yards (4,400) in his very first season and has averaged an incredible 4,900 yards a year ever since.

What changed? Maybe he improved as a player, but more likely he got a different football mind in Payton than he had with the famously run-first Marty Schottenheimer.

The Chargers under Brees had a Hall of Fame caliber running back (LaDainian Tomlinson) and a solid defense, and won games as a result. They managed to get even better in 2006 after losing Brees, reaching the AFC Championship in two consecutive years. The Saints, on the other hand, have never had anyone who could reliably run the ball since 2006 (despite spending a No. 2 overall pick on RB Reggie Bush), and have usually fielded a poor defense. Thus, they have needed to pass 600 times or more a year to stay competitive. Brees has made the Pro Bowl many times now throwing for incredible stats in such a pass-heavy offense, but it has rarely led to desired success.

If anything debunks the importance of passing thresholds, it’s this: the two times the Saints reached the NFC title game or better, Brees had his two worst passing seasons by yardage as a Saint. However, his best season by net yards per pass attempt was 2009 – the Super Bowl winning season.

Baltimore and Flacco are constructed much like those early 2000’s Chargers or 2000's Patriots – balanced offense with a tinge of favoritism to the run while playing good-to-great defense. Throughout the 2012 Super Bowl run, the run game rarely impressed, leaving the game in Flacco’s hands to win – which he did with only a modest number of attempts but an elite NY/A of 9.2.

The only time Baltimore has exceeded 600 pass attempts was in 2013 when Flacco had 614 of them. You might remember this was also the worst rushing season the Ravens ever had as they struggled to an 8-8 record, which made the passing game the only plausible chance for the team to win, as it was usually playing from a deficit. Teams knew Baltimore couldn’t run and it showed with the offensive creativity week to week, trying almost anything to produce. 2013 was by far Flacco's lowest net yards/Attempt in his career (5.42), even though he threw for more yards than any of his other seasons (3,912).

The truth is Flacco could have broken 4,000 yards. If it wasn't for the injury against Detroit, I am very confident that Flacco would have reached this mark and it would have been viewed optimistically somehow. This would be dead wrong. The Ravens' offense was lousy in 2013 regardless of whether Flacco broke 4,000 yards or not.

It’s true that most of the game’s best quarterbacks possess top passing statistics whether its yards, touchdowns, completion percentage, interception rate, etc..  Flacco's NY/A does not quite match up to the game's most productive QBs. But this is also a result of the fact that a team will cater its team construct to that QB as a team philosophy.   Brees is a great example, having played in two vastly different teams and philosophies with the production to match. It will be interesting to see how Kubiak's addition affects Flacco's production. However, there is another shining example of the passing yardage myth.

The Myth of the New England Offensive Juggernaut

What if I told you there is an NFL quarterback with three Super Bowl rings and yet he passed for no more than 3,600 yards in any of those seasons as the team’s primary QB? That is no imaginary QB — that is Tom Brady in 2001, 2003, and 2004.

New England, contrary to popular belief, was not an offensive juggernaut until 2007 when they acquired one of the game’s best receivers of all time in Randy Moss, in addition to adding a great slot receiver in Wes Welker.

From 2001-2006, New England was not a flashy team, with many defensive stars and studs like Corey Dillon in the backfield.

During that time, New England played in four AFC Championships, winning three, and only blowing the fourth against the Colts after running out to a 21-3 halftime lead (unfortunately for them, they would suffer some bad fumble luck in that game against a QB you need to be at least a little lucky against to beat).

Since 2006, they’ve played in four more AFC championships, losing two of them, and to be blunt, needing some luck to win the other two. The 2007 Patriots committed three turnovers against San Diego and were fortunate that Philip Rivers played that game on a torn ACL and that Tomlinson went out of the game. In 2011, the Patriots were beaten by a perfect Flacco pass but were ultimately bailed out by one of the all-time clutch failures by Lee Evans and Billy Cundiff. Brady played poorly in both games, seeing his long touchdown streak come to an end against Baltimore. For all of the offensive dazzle they put up in yardage, points, and so forth the Patriots often came up short offensively in big playoff games.

In 2013, Brady passed for 4,343 yards — 650 more than his 2004 season. The Patriots limped along in an extremely weak AFC to a first round bye, beat an overrated Colts team with six rushing touchdowns, and then put up little fight against a flawed Broncos team in a game that was never really close. Season NY/A: 6.12

Brady has the stats of one of the game’s elite but all of his best success came when the team was defensively and run-oriented. All of Brady’s years with 4,000+ yards have ended with poor performances in playoff defeats. All of his rings have come in years where his passing statistics might cause you to mistake him for Joe Flacco.

And lastly, there is this - the stats for the past 10 Super Bowl Winning Quarterbacks for the season: 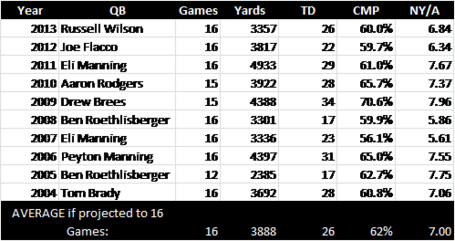 The next time someone asks when Flacco is going to break 4,000 yards, I've got a question for them: Who cares?

In Part II, we’ll examine the fallacy of the Pro Bowl selection.