Terrance West Confirms Ravens Were Taking Him In 3rd Round

The Baltimore native was almost a Raven.

Share All sharing options for: Terrance West Confirms Ravens Were Taking Him In 3rd Round

Terrance West was almost a Raven.

In an interview with Cleveland.com, the Towson University and D-1AA standout and Baltimore native confirmed that the Ravens were going to draft him in the 3rd round prior to the Cleveland Browns trading up five spots ahead to select him.

"They texted my agent and told him they were going to take me," West said. "The Browns came up before them and I'm here now."

The Ravens may have been West's favorite team but to avoid any backlash with the Dog Pound, he's going to avoid any allegiance to the Ravens.

West will still have the chance for a yearly homecoming since both the Browns and Ravens are members of the AFC North.

"I'm looking forward to [playing the Ravens twice a season]. Can't wait [but] I'm going to look at every game as the same...We have a goal and that's to win a championship."

It may have once been a dream for West to play with the Ravens and he sure did seem excited to hang with current Ravens players and visit the facility during an official workout. Now that West focuses on a dream to win a championship with the Browns, he's likely going to be disappointed once again.

In all seriousness, West was a great college player at Towson and even though he'll be a member of a divisional rival, many Baltimore fans, including myself, will respect where he was born and raised and will still root for him to be successful - that is unless he's playing the Ravens.

On another note, the Ravens did get to draft another local prospect in Wake Forest wide receiver Michael Campanaro. A native of River Hill (just outside Columbia, MD)  Campanaro even played for the "Ravens" back in his pee-wee football days. 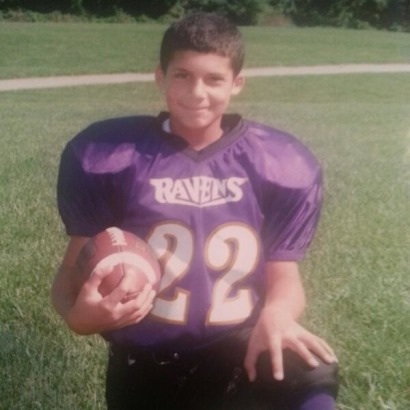