The impact of the run game on winning

The run game is a critical component of winning teams - however, it doesn't help win more than passing does.

Share All sharing options for: The impact of the run game on winning

In parts I and II of this statistical analysis of past Ravens teams, I made a case for the supreme importance of passing game efficiency (yards per attempt) and interception rate (INTs per attempt) to winning, and how they’ve fueled Baltimore’s success.

Thanks to the work of smart statistics-minded people like Brian Burke, we know that these four stats correlate extremely well to victory. I then posited that given the choice, the Ravens would ideally be best served for 2014 to improve its pass defense with a defensive back selection and barring that a wide receiver.

But as important as the pass game is, the run game does of course matter – it just happens to matter less, statistically, to winning as passing does. It’s always better to be good at both obviously.

So, in parts III and IV, we’ll examine two sets of primarily run-based statistics – rushing efficiency (yards per rush attempt) and fumble rate (fumbles per play) – and how the Ravens have fared in these during their good and bad seasons.

The Ravens have long been predicated on running the ball and stopping the run. It’s a mantra that has served them well over the years generally speaking. John Harbaugh has always espoused a great belief in it. It’s also considered core football philosophy.

Before going into the numbers, we should examine why football people value running the ball and stopping the run.

I’m no football scout but I think that the value of stopping the run (and this logic works in reverse too for why rushing the ball is good) can basically boiled down as this:

1) Stopping the run forces Offenses to be one-dimensional

4) It doesn’t risk your most important player – the Quarterback

1 - When offenses become one-dimensional, they lose access to an extremely valuable weapon: play-action passing.  The deception inherent in play-action scares defenses because they have to react to the play in real-time. This is no easy task when the wide receiver can run 40 yards in four seconds.  A one-dimensional offense that can’t run, can’t challenge a defense with this element of deception (Sun Tzu would agree no doubt). Matt Schaub for instance, Kubiak’s former QB, made a $62 million extension of using Foster to sell play action and then hitting Owen Daniels for a wide open TD.

2 - Long third-downs are good for the defense because they greatly increase the risk to the offense – long passes are much more easily intercepted. They are hard to complete, require more time to get to the sticks (read: requires linemen to block elite pass rushers longer), demand greater accuracy from the QB and skill from the receivers, and limit the offensive coordinator’s choice of plays.  In short, everyone knows pass is coming and that is half the battle.

3 - The ease of execution is an underrated component. Ever wonder why teams are finding running backs in the middle rounds and turning them into 1,000-yard rushers? Or why guards and right tackles can be found almost anywhere? Conversely, ever wonder why not all 32 teams can get a franchise QB? It is because the passing game is  more difficult to execute at a high level than running plays are. The QB position alone is perhaps the hardest in sports.  Then factor in multiple wide receivers needing to develop timing, run proper routes, actually catch the ball and on and on and you must draw the conclusion that it is simply more difficult to pass than run. A running back, meanwhile, takes the ball from the quarterback, finds the predetermined hole set by blocking linemen, and takes off.  Blocking and tackling, as Vince Lombardi would say.

4 - Finally, the risk to the QB is not really a big reason by itself, but it is a factor nonetheless. The QB is easily the most important player on the field and his loss is catastrophic to an NFL team’s season.  But he basically cannot be injured on a run play. He absolutely can on a pass play. New England’s 2008 season came to a halt when Tom Brady took a massive knee injury in week one. A cheap shot diving hit from Deandre Levy in week 15 screwed up Joe Flacco’s MCL, which cost the Ravens two critical games to end the 2013 season and thus no playoff berth.

Want to know why the Ravens paid Haloti Ngata a 5-year, $61 million deal? It wasn't because of his run defense skills (which are superb).  We can find any old defensive tackle to clog the middle at a passable level. The Ravens don't need to pay $60 million for run defense. They paid Ngata because of the incredible pressure he generates on pass plays. Teams double team him because they are afraid that if they don't, he'll destroy the guard one-on-one, and kill the most important guy on the field — the QB.

So, the run game has great value. It’s just that, statistically, it doesn’t lead to wins quite like passing. And really this should be self-evident. When you can gain 20 yards at a time rather than 4.0 yards at a time, your margin for error is much more forgiving.  You can score quickly and more often.  Its just that its harder to develop a great passing game.

Think of it like this: Stopping the run only means something if you can also stop the third down pass that immediately follows it. If your pass defense is no good, no amount of run stopping will mean anything. Teams will simply pass, get the lead late in the game, and you’ll lose more often than you win. Similarly, if you can run the ball, it ultimately doesn’t mean anything if you get down 10 points late and cannot pass your way back into the game. The 2012 Chiefs ran for 352 yards on the Colts and lost. They ran for 227 on Baltimore in Week 5 and lost 9-6 as well. They also finished dead last in the NFL and did not hold a lead until week 10. How is that even possible for a team that was running over people?

An examination of the Ravens’ past seasons bears this out.

The 2000 Ravens famously had the best run defense in NFL history by every conceivable measure: yards, yards/carry, points, DVOA. You pick a defense metric, they owned it.

Both had anemic offenses but there was one key difference.  The 2000 team had the league’s seventh best pass defense – and the 2007 team the 21st. There were other factors at play (fumbles for one, which we’ll cover in part IV) but the 2000 team could play great pass defense, went 12-4 and was the best team in football. The 2007 team couldn’t and went 5-11.

Here is a table of Ravens run defenses: 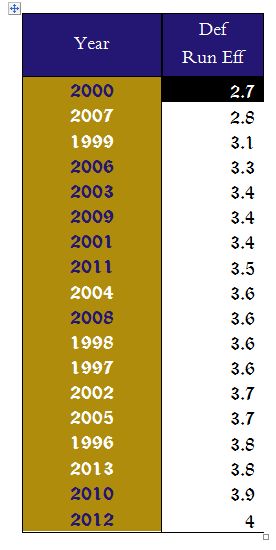 Now, of course, there are plenty of Baltimore's playoff teams at the top but that 2007 is so high up there is telling.  At the bottom? The 12-4 2010 Ravens, which were one of the best teams in football, and the 2012 Ravens which defeated the three best teams in the league to win the Lombardi.

Offensively, success in the run game has uneven correlation to success for Baltimore as well:

The 2003 Ravens are a team I highlighted in part II for their superb interception rate but utterly terrible pass offense.  But that team won the division because in addition to its elite defense (and DPOY Ray Lewis and the drafting of Terrell Suggs), it ran the ball very well. Jamal Lewis had 2,066 yards.

But in the playoffs against good teams, running backs can be stopped. And Lewis was. Similarly, in 2009 the Ravens on the back of Ray Rice again had a great rushing attack. They scored three points against Indianapolis in their playoff defeat. Unable to run the ball, the Ravens needed to pass but suffered a series of very unlucky breaks like having interceptions stripped on the return and 50 yard run gains wiped out by a fumble.

Way down at the bottom?  The 2006 Ravens, which crushed everyone in sight. As I covered in painful detail, they would lose because they failed to pass as well as they had all season, not because of their rushing attack.

Running the ball and rushing the ball is something every team should strive to be great at. It plays its part.

But really we need look no further than the 2012 Vikings for how utterly useless a run game really is in and of itself in the big picture. One of the all-time great rushing seasons was for nothing as the Joe Webb show came to an abrupt and merciful end in Green Bay in the 2012 playoffs.

Yet time after time, we see one-dimensional passing attacks, like the Saints, compete deep into the postseason. Of course the trick is, players like Drew Brees are pretty tough to find.

The run game is great and I’m certainly not one to question it as a team philosophy and it offers many benefits.  But statistically, if we had the choice, we should prefer to be a better pass defense than run defense.

Of course, we don’t necessarily have the choice. On May 8, the Ravens will draft the best guy on the board. But deep down, I hope it’s a wide receiver or defensive back because that’s what contributes the most to winning.

In part IV, we’ll explore perhaps the most difficult element of winning to predict or build for, fumble rate, and how it helped the 2000 Ravens become the best team in football.