What if the Quarterbacks Fall on Draft Day?

If the Quarterbacks fall on Draft Day, what does it mean to the Ravens at 17?

Share All sharing options for: What if the Quarterbacks Fall on Draft Day?

The more I read about league opinion on the Quarterbacks, which is almost definitely smokescreen anyway, the more I keep hearing that they are not as good as advertised.

Some sources indicate that Bridgewater is a "2nd round talent". Others that Manziel won't be a top 10 pick. And still others that at least one of the big 3 QB's will fall to late 1st, early 2nd.

The truth is hard to discern and frankly, I'm always inclined to disbelieve anything I read about prospects' so-called "true skill" this time of year. Teams are incentivized to BS reporters and help their own cause.

However, professional draft analysts, like one I enjoy reading, Daniel Jeremiah, or one of the many others, are not incentivized to BS us. If they think a guy like Bridgewater really is a 2nd round prospect, not a top 10 one, then we can trust that opinion (even if it is disconnected from what teams themselves are thinking). Some have been willing to state that the QB's should not be top picks.

In any event, one truism every year is that QB's go higher than they should, the reasons for which are obvious. So with all that said, I fully expect at least two of them to go before the Ravens pick at 17.

But what if they don't? Who are they looking at if none should go before 17? Or what if just one goes?

Well the only way to know is walk the scenario through.

So, again, you can choose whatever big board you like but I like consistency so I'll stay with Jeremiah's top 50, and his top 32 needs primer (until Mayock releases his board).

And what we find, if no QB's go before us, our BPA/Needs draft nets us: 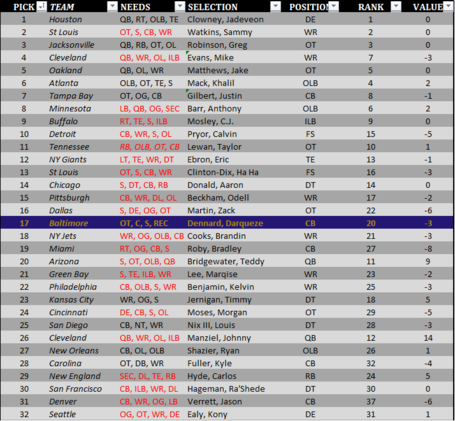 Now to be fair, this pick easily could have been Brandin Cooks too. I suspect either would make fans fairly happy. Receiver and CB are a need with Dennard slightly edging Cooks in this case by ranking (whether CB or WR is a bigger need is probably a matter of opinion, but WR would probably win that one). So its a toss up in this scenario.

If we were going STRICTLY by BPA though (and this would be a very strict interpretation) - the pick would be Timmy Jernigan, DT, FSU (18th prospect) per this board. But the need for DT is small enough that if in fact the 18th and 20th prospects were there, I think the Ravens would be hardpressed to pass on a CB or WR that are really close to Jernigan.

Anyway, if we're being realistic - we probably think at least one QB is going earlier than 20. My money's on Blake Bortles being that guy. He may have less pedigree but he doesn't seem to have the oft-cited concerns that Bridgewater and Manziel are labeled with.

So if Bortles goes early, let's say to Minnesota, who I think would be fairly ecstatic to land him and is decidedly in Win Now mode (which is code for: the GM is going to be fired unless the team gets better fast): 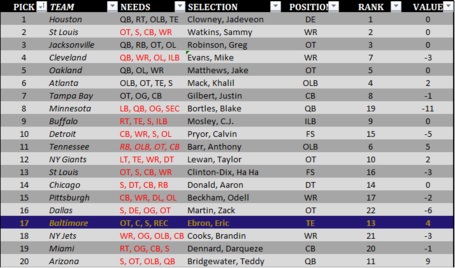 A reasonably big difference - 13th prospect vs. the 20th using these data sources. But this actually plays out closer to the scenario I have run when ALL three quarterbacks go early - Ebron is usually in the mix at 17 along with Calvin Pryor. We shall see.

However, I suspect that we'll see two Quarterbacks go before us at 17. Much of the criticism is smoke and mirrors and lots of these teams need one.

The real opportunity facing the Ravens is what to do if the QB's do in fact fall hard - now they are in prime position to trade back with a QB needy team. Teams would need to get into the mid to late first for their QB, and the value to the Ravens at 17 may not be there.

A team like Houston knows its probably has to move up from 33 to get a QB if it takes Clowney at 1. The same is true for Jacksonville and Oakland. They probably have to get ahead of Cleveland at 26 to get one of the big 3 and maybe even for Carr also. I just don't see teams having the discipline to wait it out to the second despite what they "claim".

These are the sort of unexpected opportunities that teams have to watch out for when they're on the clock. The Ravens know how to maneuver around these situations if necessary.

Anyhow I encourage you all to mock it out with fewer QBs than expected going early. This may just be what happens on May 8th.