The Common Thread between the 2000 and 2012 Super Bowl Champions

The common thread between the 2000 and 2012 Super Bowl Champions - and it isn't Ray Lewis.

Share All sharing options for: The Common Thread between the 2000 and 2012 Super Bowl Champions

The NFL has made tremendous strides in advanced statistics in recent years. It may never reach the heights that baseball has, but then again, measuring a complex team sport with 22 moving parts on each play is inherently more difficult than measuring a single battle between batter and pitcher.

One site that has done a great job is Football Outsiders who has a statistic, DVOA, that has rapidly become industry standard among analysts (not the Phil Simms or Skip Bayless variety either) for its effectiveness in measuring a team's true level of performance.

For instance, would it surprise you to learn that it rated Seattle as the best team in 2013? Probably not. If you are not familiar with this statistic, I encourage you to go educate yourself on it because its worth it.

Having spent a lot of time looking at their stats, I wanted to do a deeper dive on the Ravens' specific data of their two championship teams.

One thing that stood out was the common element to both seasons — Special Teams.

The 2012 Ravens had the No. 1 special teams in the league that year. In fact it wasn't even close. They did this despite having the third worst special teams in 2011. You may remember the Ravens making a big push to sign special teamers like Sean Considine and Corey Graham. Oh, and Jacoby Jones was pretty valuable too.

They did this despite having the worst "hidden ranking", which is a measure of the things they cannot control that cost them points — for instance opposing field goals (Ravens' opponents in 2012 had a near-perfect FG rate in the regular season).

It was so good that the second best special teams unit, Cleveland, was closer to eighth than it was to first.

In fact it was so good that it has an even higher distinction — it was the best special teams unit of all the 64 Super Bowl and NFL Championship teams going back to 1950.

Disclaimer: Football Outsiders is currently as far back as 1989 for its Historical DVOA, but a superb article from a guest writer on their site (link above) performed an excellent estimation of all pre-1989 teams — the Ravens are still No. 1.

In fact, here is just how good the 2012 Ravens Special Teams Unit was: it ranked as the seventh best special teams unit of any team since 1989. And if we extend that back to 1950, it was the 16th best. That's out of every team that has ever played an NFL season.

So, of course, this unit would give up two special teams touchdowns to the Broncos in the playoffs at the worst possible time. That's the NFL for you, where no matter how dominant you are, one game, one quarter, one play can be your undoing. But thankfully they came through with the win.

In any event, you might find it interesting that another team had a pretty good special teams unit. The 2000 Ravens.

Like Jacoby Jones, Jermaine Lewis was just an OK receiver but an absolute stud in the return game. He had several return TDs, including two against the Jets in week 17, and famously, a return TD in the Super Bowl to cap off a three return touchdown in 36 seconds scoring spree.

The Ravens had the No. 1 punt return unit in the league that year, and the No. 1 field goal kicking unit as well thanks to Matt Stover.

The 2000 Ravens finished with the third best special teams DVOA behind only Miami and Seattle. Unlike the 2012 Ravens special teams unit, which blew it in the divisional playoff game, the 2000 group came up big in their divisional game — it blocked an Al Del Greco field goal and returned it 90 yards for possibly the most important (and rare) TD of the year. That was the best Titans team they ever fielded and its safe to say that the 2000 Ravens offense needed all the help it could get.

In the rankings of the 64 championship teams, they still come out pretty well - 3rd best overall, whether the cutoff is 1989 or 1950.

Here's the individual rankings for each special teams unit in each category against the other 31 teams in their respective year: 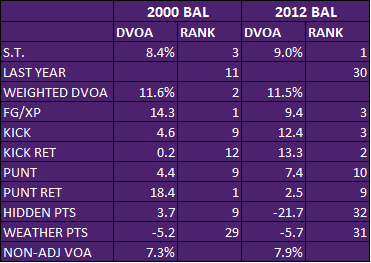 Not only does re-signing Jacoby Jones for $3.5M a year seem like an even better deal, but don't you just suddenly love the fact that John Harbaugh is a special teams guru?