So did Ray Lewis but hey, his job is to educate the masses, not navigate Twitterland. Or in technical terms, motivate, not authenticate...

Yesterday, Ray Lewis responded to an account purporting to be Joe Flacco with regards to the 2012 Super Bowl run. Here is the original as retweeted from the @Ravens page:

That was not Joe Flacco. It was one of the innumerable number of fake accounts out there for famous people. In this case, the masquerading account in question was @OfficialFlacco, he of the 1,000 followers and 43 tweets.

Joe Flacco's actual Twitter account? @TeamFlacco. You know -- the one with 184,000 followers that almost certainly is on a number of lists of official Raven accounts at Owings Mills, Md. and that nearly any Ravens fan of any Twitter experience would know by heart.

But I think we can forgive Ray Lewis for mixing the two up. Ray Lewis' job these days is to appear on ESPN and lend some credibility to the goings-on of the NFL as one of the best to ever do it. It isn't to memorize the various Twitter handles of his ex-teammates or otherwise navigate the cesspool of haters, critics, and catfishers on Twitter (although it might be wise for him to try).

As it turns out though, it is someone's job to know the Twitter handles of the past and present Raven players.

That someone managed to mix up just who in fact is running the account for the team's starting quarterback.

Now, at first glance this is the sort of dumb "mea culpa" that we would laugh about and move on. People make mistakes, even those that run the public face of a billion dollar team with millions of interested fans.

However, in light of the questionable public relations campaign by the Ravens PR team in September, I think it's fair to question just what the hell is going on over there a bit more than we otherwise might had this minor incident occurred in a vacuum.

Keep in mind it brings me no joy to levy this minor bit of criticism. In fact, I think the Ravens as an organization took far undue criticism for their handling of the Ray Rice issue at least from the personnel/executive side. They are still the only NFL team to actually have taken meaningful action (albeit later than a lot of people have liked) with regards to domestic violence by cutting Rice, which is a lot more than you can say for some others — like Carolina, which seemed OK with playing Greg Hardy, despite being found guilty of domestic violence by a judge, until succumbing to public pressure.

In any event, their lack of attention to detail here is actually a bit startling. I don't profess to know who runs the Ravens social media accounts, how many other jobs and hats they wear, what their experience level is, and frankly I don't care. But I know this: it's about as close to a classic example of the "YOU HAD ONE JOB" meme as there ever was.

So, @Ravens, when you want to retweet a little happy exchange between two Ravens players, I don't think it's asking too much that you ensure that they were actually Raven player accounts first. 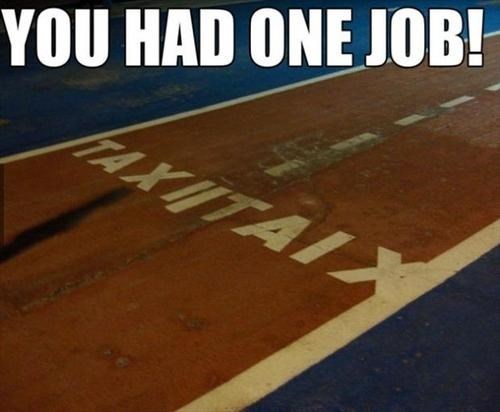