Since 1996, the Ravens worst total turnover margin is against the Colts, and its not close.

The Colts have long been a tough test for Baltimore. Many long attributed this to Peyton Manning's dominance over us. Some suggested that the Ravens were just never as good as the Colts.

Neither was true. Many of Manning's worst games have come against Baltimore actually, including the playoffs. Indianapolis has even been a little lucky, often fumbling against Baltimore and recovering most of them. They've had two field goals bounce off the crossbar and go in during playoff games.

But the truth is, Baltimore has routinely played well below its norm against Indianapolis compared to its other common AFC opponents.

Here is the turnover margin against AFC opponents since 1996: 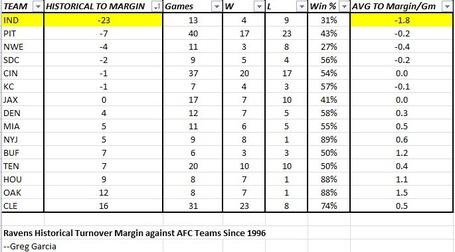 That -23 number is troubling and unfathomably higher than every other team.  The next team isn't even close with Pittsburgh at -7.

The turnover margin per game is even more glaring.

Baltimore has generated on average one turnover a game against Indy, with 13 across 13 contests. So Baltimore's defense has done its part.

Yet, they still nearly have a -2 turnover margin. This means Baltimore is averaging three turnovers per contest. They have given the ball away 38 times in 13 games.

This has nothing to do with Peyton Manning because #18 didn't play defense. The vast majority of these turnovers are coming from the Ravens' offense against a defense that has long had a poor reputation outside of its defensive ends.

It has nothing to do with Kyle Boller or the others on our pre-2008 quarterback carousel either. Our turnover margin is respectable against most other opponents historically. Perhaps it is just a really unfortunate coincidence but the facts are what they are.

Folks, you don't need me to tell you that turnovers matter. After points, turnovers are the strongest correlating statistic to victory — meaning teams who win the turnover battle win the vast majority of the time.

If the Ravens expect to win, they cannot afford to lose the turnover battle so badly as they often have.