TMZ is a well-know celebrity news network, who mainly gets the inside scoop on all of the biggest celebrities. They are the ones that always interview people in public, when they happen to see them out and about in the world. 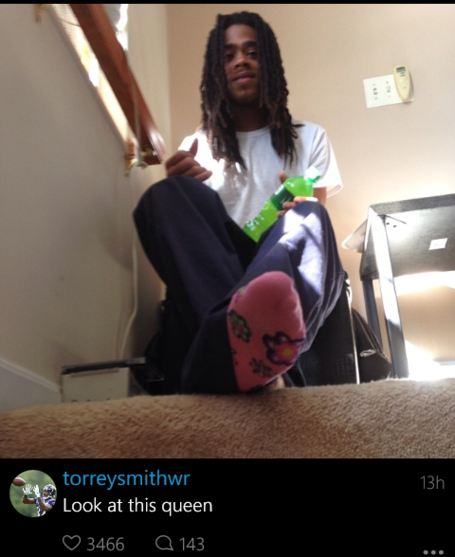 All the photo is, is a man with pink, flowery socks on. Torrey Smith called him a "queen," likely due to the socks. That's it. It is him making fun of his friend/family member in a friendly way. There's nothing wrong with it.

TMZ decided to take this picture and caption to the next level, though. They came out with an article that's entitled, "Torrey Smith: NFL Player Fires Off Homophobic Slur." Seriously, TMZ?

According to the TMZ Staff, Torrey Smith's caption needs to be compared to San Francisco 49ers' CB Chris Culliver's homophobic slur last season, where he actually talked about gay people in a bad way.

If I'm not mistaken, there is no reference to gay people, hatred of marriage equality, or anything of the sort in the four words that were on Smith's Instagram post.

Smith is one of the most caring and compassionate players on the Baltimore Ravens, which makes this article all the more funny.

Here is what Smith said of the article on Twitter:

The things these gossip sites do to get attention smh...I wasn't being offensive nor am I homophobic not apologizing or taking it down

I knew I liked mediatakeout more than tmz haha

It's amazing how much power the media has...I'm just glad people see how irrelevant their post was and know my true character

Torrey Smith isn't letting it get to his head, as he shouldn't. The article was posted in an attempt to stir up drama and controversy, and it didn't succeed. All it did was help show America how idiotic TMZ can be, and how they aren't a real reliable source of celebrity news.

If you want to read the article, which I recommend if you want a good laugh, you can find it here on TMZ.com.