John Harbaugh blamed NBC for not showing the replay to his staff "in time." But was it really NBC's fault?

Share All sharing options for: Ravens let challenge opportunity slip by against Broncos

Would it have prevented the Broncos from putting up enough points to run away with a victory the way they did Thursday night?

Probably not. It's tough to assume one moment effectively changed the outcome of Denver's 49-27 win, in which Peyton Manning wound up tying a single-game record by tossing seven touchdowns.

But it's hard to argue that moment didn't wind up becoming a turning point for Denver offensively. If Baltimore forces a punt there, that's one less drive that results in a touchdown for Denver. Denver's then backed up on its own 21, which would have given the Ravens better field position following the punt as opposed to starting at their own 20 following Denver's score. And if the Ravens went three-and-out, who's to say Denver blocks it with Baltimore in a more comfortable situation?

It's why sports can be so riveting at times. There are so many small aspects that build into bigger scenarios, which ultimately give one team a decided advantage over another.

And that leads me to this point, hinted by the subject of this post: Why didn't the Ravens challenge that third-and-9 play?

It was clearly an incomplete pass. Shocking, perhaps, was the fact that Harbaugh, via ESPN.com's Jamison Hensley, said the coaching staff was unaware Welker dropped that pass.

"That's something we got to see," Harbaugh said. "It'd be nice if NBC would show that and get a chance to look at it. We never saw that."

Here's the problem: The Ravens' coaching staff in the coaches box should have seen the play because NBC had the replay up rather quickly. 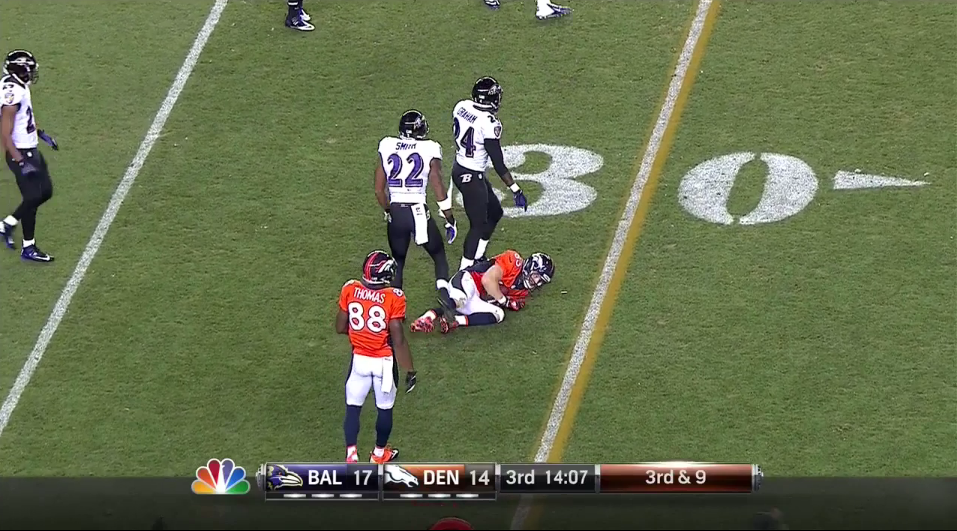 Here's the shot of Welker securing the ball on the ground, to get the referees to believe he made the catch in question. The officials gave it to him with 14:07 remaining in the third quarter and just a yard over the first down marker, good for a 10-yard pickup. 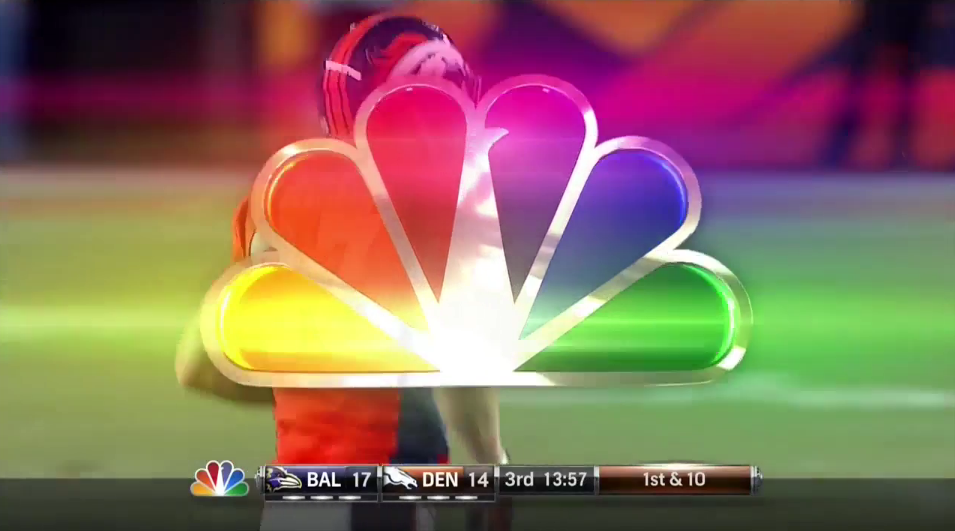 NBC analysts Al Michaels and Cris Collinsworth begin pondering whether Welker did in fact make the catch as the network cuts to replay at the 13:57 mark. 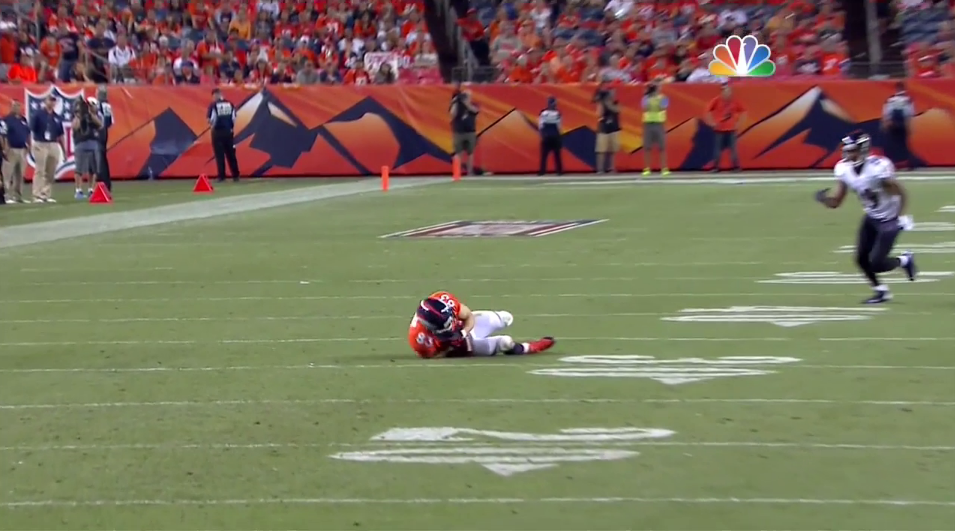 They show the replay which clearly shows Welker did not catch the ball. Both analysts quickly agree and seem to assume Harbaugh will soon throw his challenge flag. 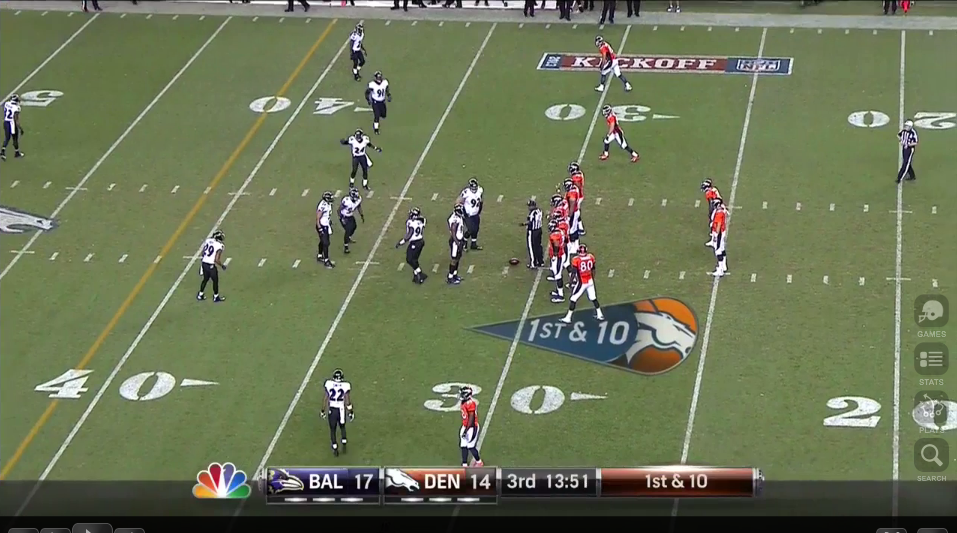 This shot is immediately after NBC cuts back to the game. As you can see, the clock is at 13:51. Corey Graham has already lobbied to Harbaugh to throw the challenge flag. But in all fairness, a player on the field may not be the best one to listen to in the heat of the moment. After a couple of seconds tick by, without a challenge flag thrown, Collinsworth mumbles, "Snap the ball, Peyton," which, judging by twitter, seemed to rile up the Ravens' faithful. 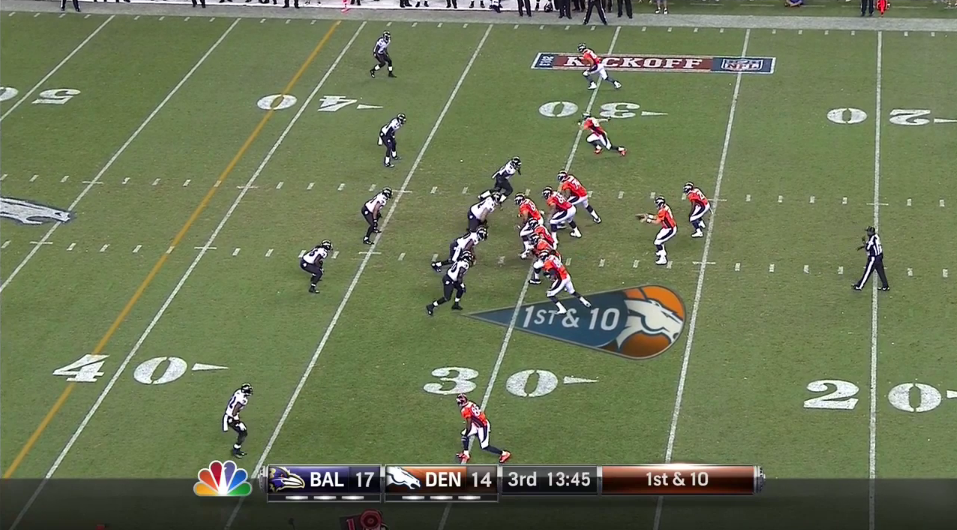 After getting his team set, Manning takes the snap at 13:45, with the actual snap occurring probably about a half a second before. That gave the Ravens roughly 5.5 seconds to throw the challenge flag, assuming someone upstairs saw the angle NBC showed in between snaps.

Coaches in the booth have access to the game feed so that they can relay the information down to the head coach via the headset. The fact Harbaugh claims he never knew about this play indicates the person in charge of checking for this was either not paying close attention to the NBC feed or busy with another matter after assuming Welker made the catch.

One thing to consider though: I emailed a representative with NBC Sports public relations, as well as tweeted at them, to ask if there's a delay for the network's football broadcast, which is plausible because of the possibility of profanity in sports. I have yet to receive a response. However, Pro Football Talk indicated the replay would have been shown in real time, giving the coaches every chance to tell Harbaugh to toss the red flag.

As NBC analyst and former NFL coach Tony Dungy said after the game, that mistake falls on the assistants. No way is Harbaugh going to know if that's a catch or not in real time on the sideline. The Broncos certainly aren't going to put that play up on their Jumbotron either.

But Harbaugh didn't need to blame NBC for something the network actually did in a timely manner. Someone on the Ravens' staff messed up and a momentum swing took place. Three plays later, the Broncos scored a touchdown. The Ravens went three-and-out and had a punt blocked. The Broncos took over on Baltimore's 10 and scored a touchdown in two plays.

If the Welker play is challenged, the Broncos punt the ball with 14:13 remaining on the clock in the third quarter, with Baltimore still leading 17-14. What would have happened next is impossible to predict. But what wound up happening is 3:39 in game time ran off the clock with Denver grabbing a 28-17 lead.

Again, that's not to say the outcome would have ultimately gone Baltimore's way if a challenge flag is thrown. With the way Manning and his offense performed in the second half, Denver deserved its big win Thursday night.

Next Up In NFL