Why are the Ravens having so many problems running the ball? And what can they do to fix it?

Share All sharing options for: What's Wrong With The Ravens Run Game?

In the wake of winning a Super Bowl, it's easy for a team's expectations to get out of control. But even the most die-hard Ravens fans had no illusions that the Ravens offense was going to improve this year. With the trade of Anquan Boldin and the injury to Dennis Pitta, it was obvious that the Ravens passing game was going to take a step back.

The hope was that the revamped offensive line from the Ravens 2012 Super Bowl run would reinvigorate the Ravens run game, which in turn would give Flacco the ability to make the most of the limited weapons he was provided. It was clear that the offensive identify of the 2013 Ravens was going to be their effective run game.

Four games into the season, I think it's fair to say, it hasn't gone well.

The first step is admitting you have a problem

Anyone with eyes who watches Ravens games would be able to tell you that the Ravens have not been nearly as successful running the ball this year as they have in the past, but believe it or not, the raw numbers offer special insight into terrifying lack of success in the Ravens ground game. The team fell from an average of 4.3 yards per carry in 2012, which was good enough for 12th in the league, to an average of 2.6 yards per carry in 2013, which ranked 30th in the league.

While I think it's reasonable to assume defenses the Ravens have played contributed in large part to the Ravens ineffectiveness in the run game, there is no way that their defensive effort alone explains the entirety of the current struggles the Ravens are having running the ball.

First, even if opposing defenses are having an effect, the Ravens run game is struggling far more than playing a tough defense would lead us to believe. Last year, the top run defense in the entire NFL gave up an average of 3.5 yards per carry. So unless we believe that Denver, Cleveland, and Houston all have historically effective run defenses, the Ravens are at the very least decidedly below average.

Second, when the Ravens played these teams in the past, they have had far more success in the run game. The Ravens managed a collective 3.6 yards per carry in both their games against the Broncos last year and 4.6 yards per carry against their game against the Texans. Those defenses remain relatively unchanged from 2012, which would indicate that the difference in performance is the result of a change by the Ravens.

Finally, while Cleveland, Denver, and Houston all have pretty good run defenses, the Buffalo Bills do not. Despite Buffalo giving up an average of 4.2 yards per carry in 2013, and the Ravens managed a paltry 2.6 yards per carry. If the Ravens really were only struggling against top run defenses, why did they have such a problem running the ball against Buffalo?

All three of these facts point to a clear conclusion: while the opponent's defense isn't making it easy for the Ravens to run the ball, the lack of success seems to be an intrinsic to the Ravens offense, not the byproduct of impressive run defense.

The run game and Wide Receivers

And I'm sure this is true to some extent. The Ravens are known for being a run-oriented, physical team and opponents probably plan to take that away from them. But I still don't think that this is the primary reason the Ravens run game has been struggling.

First, while it might make sense that opposing teams were stacking the box to start the season, the Ravens have been so pass heavy since them it doesn't make sense for them to stack the box anymore. The Ravens have attempted the 6th most pass attempts in the NFL while only ranking 20th in run attempts. Other teams aren't stupid. If the Ravens are passing much more frequently then they're running the ball, they're going to abandon the run-focused defense and start playing the pass.

Second, the Ravens have had problems even when they've had an even number of blockers to defenders. 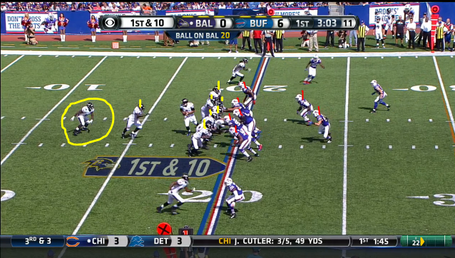 In the play above, the Ravens have an equal number of run blockers to Bills run defenders. If the Bills were as bad against the run as their season stats indicate, the Ravens should have at least some success. 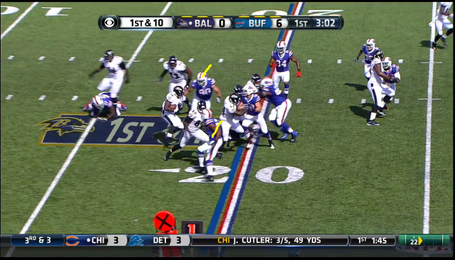 But the Ravens blocking doesn't hold up, three Bills defenders get into the backfield, and Pierce is barely able to manage a one-yard gain.

Despite the supposedly even blocking playing field, the Ravens run game was still unable to have a lot of success. Are there examples where the Ravens are able to take advantage in the run game? Of course. But the example above shows that despite a large number of blockers, a sub-par run defense like the Bills was able to penetrate the Ravens backfield.

Are the Running Backs to blame?

The next reason why the running game would be struggling is because of failures at running back. But I'm fairly certain that they're not the cause of the Ravens run woes. For one, Ray Rice was a top ten running back in the league last year, and Bernard Pierce was one of the very best backups. It seems too coincidental that both running backs' production would independently decline at the same time.

Second, advanced statistics demonstrate that independent of the Ravens offensive line, the both running backs are actually pretty successful. Pro Football Focus, an advanced stats site, provides a statistic called elusiveness rating. Without getting too much into the specific methodology, it uses miss tackles to try and calculate how effective rushers are independent of their offensive line. While Rice's injury meant he didn't play enough snaps to qualify for the rankings, Pierce ranked 12th overall in elusiveness rating (wish I could link, but it's behind a paywall. Sorry!), ahead of names like Arian Foster, C.J. Spiller, and Doug Martin. So both common sense and advanced statistics seem to indicate both Ravens running backs are not the reason for the ineffective Ravens running game.

So what's the biggest problem? Our Offensive Line.

The biggest problem with the run game appears to be the offensive line. Not only does it appear to be the last choice by process of elimination, there is also a litany of evidence pointing to the offensive line as the crux of the Ravens running problems.

First, according to the grading system provided by Pro Football Focus, the Ravens have a terrible offensive line. Gino Gradkowski, the Ravens center, is ranked as the worst center in the entire NFL. Both Ravens tackles, Michael Oher and Bryant McKinnie, are ranked in the bottom 20 of all tackles. And after a great rookie season, the left guard Kelechi Osemele seems to have regressed, and ranks in the bottom 20 of all guards in the NFL.

What makes this all the more troubling is that the offensive line struggles don't seem to be the result of a scheme change. Instead, it just appears to be the result of the personnel, with poor play from the rookie Gradkowski, regression from Osemele, and more inconsistent play from Oher and McKinnie.

We're only four games into the season, so it's possible that the problems in the Ravens run game are still the result of a limited sample size. But the evidence suggests that it's a real problem that's not going away anytime soon and is not easy to fix. Since the Ravens problems with the offensive line seem to be very personnel based, there isn't a whole lot the Ravens can do to fix it quickly. I'd suggest replacing Gradkowski with A.Q. Shipley, but even that doesn't solve the Ravens offensive line problem. Unless the existing lineman start playing better, it doesn't appear that the run game is going to have anywhere near the level of success it's had the past couple of years.

For now, it would appear the Ravens will need to find creative ways to circumvent the need for a highly effective rushing attack to achieve even a league average offense.