How did Joe Flacco throw a career high 5 interceptions against a depleted Bills secondary? I take an in-depth look at the game film to find out.

Share All sharing options for: Breaking Down Joe Flacco's Interceptions

While the Ravens offense had struggled so far this season, things were supposed to turn around against the sub-par Buffalo secondary that was riddled with injuries. With star safety Jairus Byrd and cornerback Stephon Gilmore out with injuries, it looked like the Ravens were going to take advantage and jump start their lackadaisical passing attack.

But not only did the Ravens passing attack fail, the Bills secondary was a play maker and one of the major reasons the Ravens lost the game. How, against such a beleaguered secondary, did Joe Flacco throw a career high of 5 interceptions? I break down each interception and figure out why it happened and who is responsible. 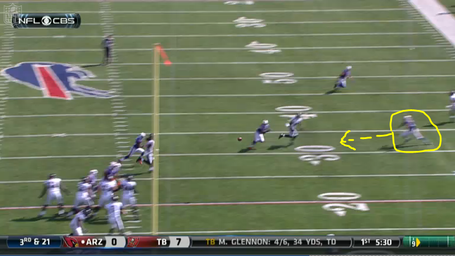 Flacco tries to force the ball into Tandon Doss for the first down, but Aaron Williams (circled above) reads Flacco and undercuts the route for the easy interception.

Who's to blame?: Flacco. He couldn't have been more transparent the ball was going to Doss and completely missed Williams lurking by the sideline. 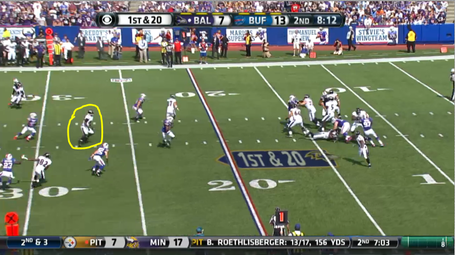 Flacco attempts to pick up about 7 yards with a quick strike to Ed Dickson over the middle. 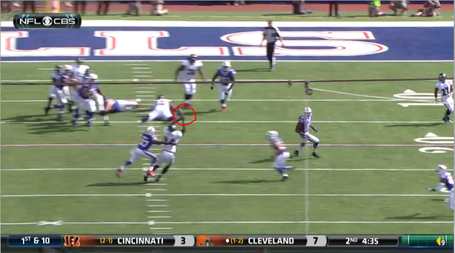 Unfortunately for the Ravens, Dickson can't come up with the catch and the ball bounces off of his hands. 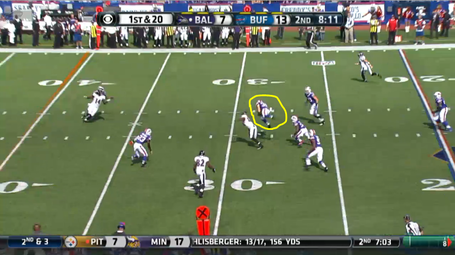 After the ball is knocked up into the air, former Raven Jim Leonard makes a great diving catch for Flacco's second interception.

Who's to blame?: The interception is pretty clearly Dickson's fault. Flacco made a good, safe pass that Dickson not only failed to catch, but bounced it into the air which let the Bills make a play on the ball. 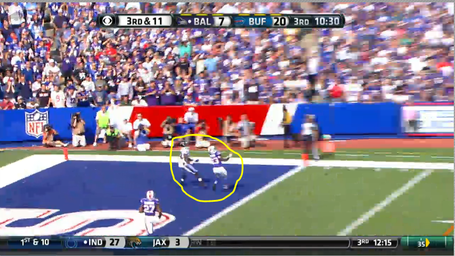 Flacco sees Torrey Smith in single coverage against Aaron Williams and throws a jump ball towards Smith in the end zone. 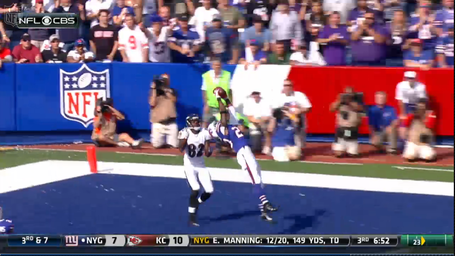 Unfortunately for the Ravens, Williams makes a great play on the ball and ends up with the interception.

Who's to blame?: The Ravens player most responsible is Flacco. Ideally, he should have put the ball where only Smith could have made a play on it, but it's understandable why he wasn't able to given the pressure he was facing. While this interception ended up being on the crucial moments of the game (Ravens were in the red zone and lost by only three points), the interception was more the result of a great play by Williams than anything the Ravens did. 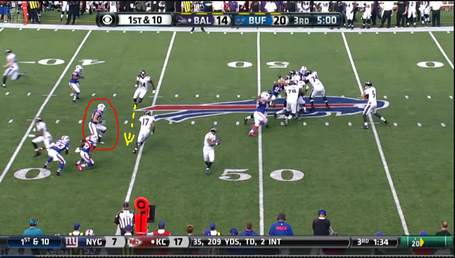 Marlon Brown and Doss are both running crossing routes, with Kiko Alonso (circled in red) in coverage. 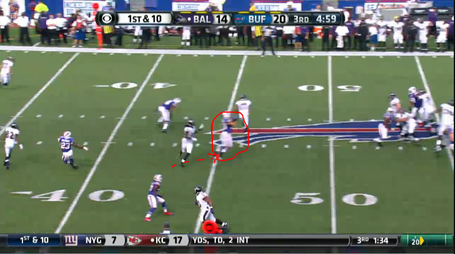 Flacco throws to Brown, but Alonso jumps the route and ends up with the interception.

Who's to blame?: The interception is unequivocally Flacco's fault. Not only does Alonso read the route, but Flacco also threw the ball behind Brown. Even if Alonso hadn't ended up with the interception, it would have been an incomplete pass. The only question is why Flacco made such a big mistake. Did he just miss Alonso? Did he mix up Brown and Doss and think his target was going to be closer to him? Regardless, it was a critical mistake and entirely on Flacco. 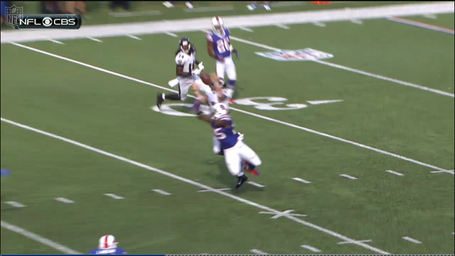 Flacco throws to Dallas Clark who is successfully covered by Da'Norris Searcy. Searcy tips the ball into the air. 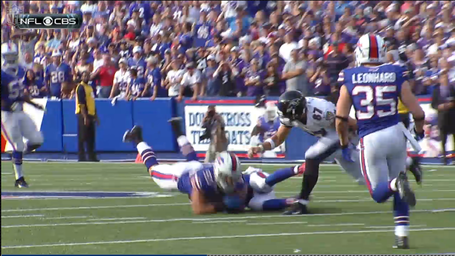 And Kiko Alonso makes an incredible diving catch to come up with the interception.

Who's to blame?: No one really. It was a tipped ball an incredible diving catch. Sure, Flacco tried to force the ball to Clark, but that's to be expected at this stage in the game. There is nothing you can do here but tip your hat to Alonso for coming up with the great interception.