Sometimes it's as simple as arithmetic when it comes to whether a team can run the ball or not.

Share All sharing options for: Tough for Ravens to run the ball when other teams take it away

Much has been made about Baltimore's inability to run the ball through three games.

The Ravens rank 25th in the NFL in rushing yards per game (77.3) as both running backs, Ray Rice and Bernard Pierce, are averaging under three yards per rush per game.

So what's exactly causing these running concerns? Baltimore returned its starting offensive line from the playoffs when the Ravens were able to run the ball. Why are the Ravens all of a sudden having problems?

Football is a relative game with moving parts throughout. If you miss one integral piece to the puzzle, it can affect the rest of the team elsewhere. It's why football is the ultimate team sport. Take Dan Marino, for instance. He's one of the top 10, if not top five, quarterbacks to ever play the game and he never won a Super Bowl. As cliche as it sounds, you need a sound team to win championships, not just one or two great players.

Ray Rice is a great running back. Bernard Pierce is a quality backup. The offensive line has done fine in pass protection. Here's the problem: The moment Jacoby Jones injured his knee against Denver, defenses have been able to take away the run.

Wait a second: How can a receiver's subtraction take away the running game? Well, if you don't have two receivers that can stretch the field, you don't have to worry about the deep game. Then you can stick a corner in man-to-man coverage while placing more focus on taking away the run.

Let's take a look at the Ravens' running attack this year. We'll start with the Denver game, before Jones injured his knee. 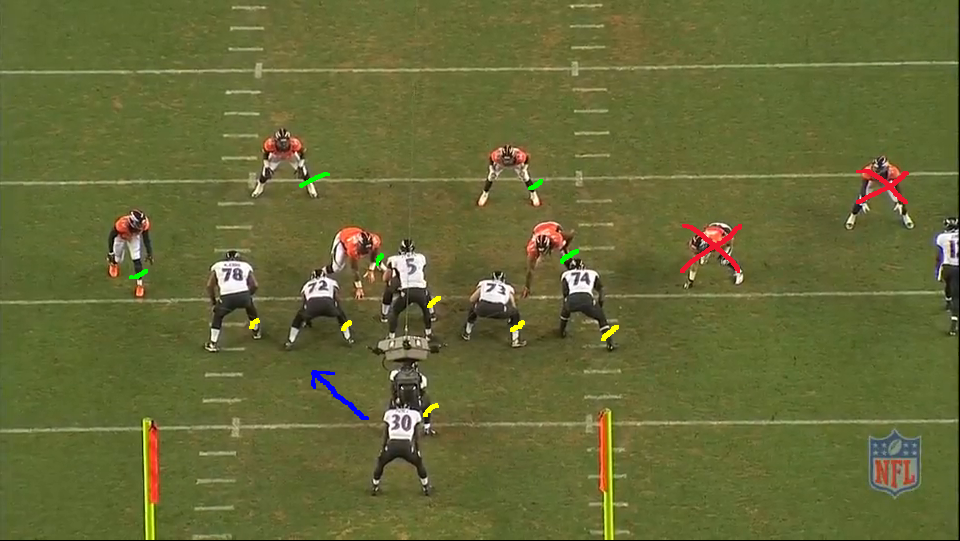 Here's Pierce's 14-yard run against Denver, when it looked like the Ravens would be able to run all over them in the first quarter. The Broncos line up seven in the box, but the play design (a run off the left tackle) takes away the two defenders on the right.

When running the ball, simple mathematical principles apply. You want more guys blocking what's in front. For this play, the Ravens have six blockers vs. five defenders. If the line executes the play, it should go for a big gain based on what's there before the snap. 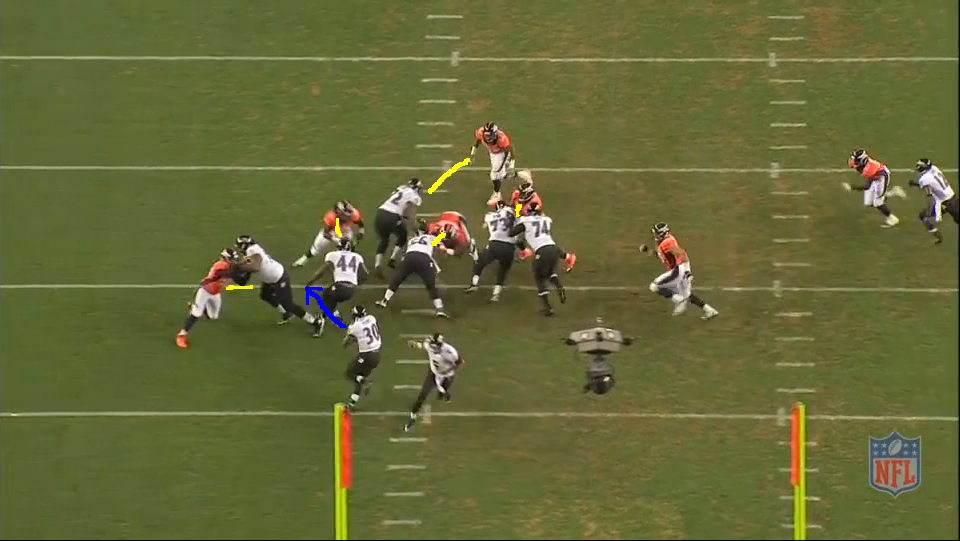 The line executes the blocks immediately and Pierce has a hole to run through. He picks up 14 yards on the play. Notice in the top right corner that Jones is an additional blocker. You can make the case that because Jones was close to the offensive line in the formation, that the defensive back on him wasn't necessarily a box defender.

Given there are two receivers with breakaway speed (Torrey Smith the other, obviously), the Broncos have to be mindful of a balanced attack. 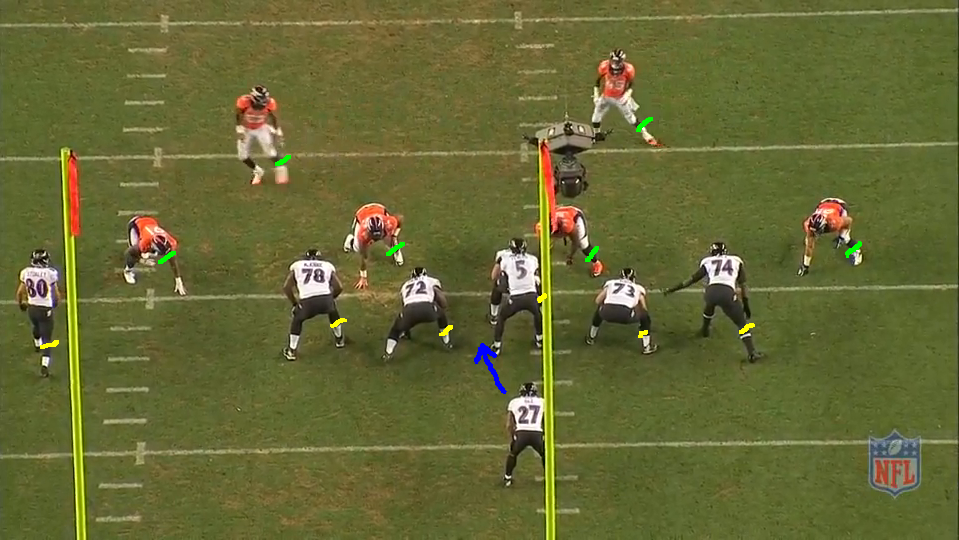 Still in the first quarter, the Broncos put six in the box on this play. The Ravens have six blockers, including Brandon Stokley to the left. This is old school football at its best (though you'll notice a new-school principle in this play), wtih an even matchup across the board.

But notice, there are not seven or eight guys in the box. Most defenses that face balanced offenses show six while trying to disguise pressures.

Six blockers vs. six defenders can go either way, making it matter of execution and talent. 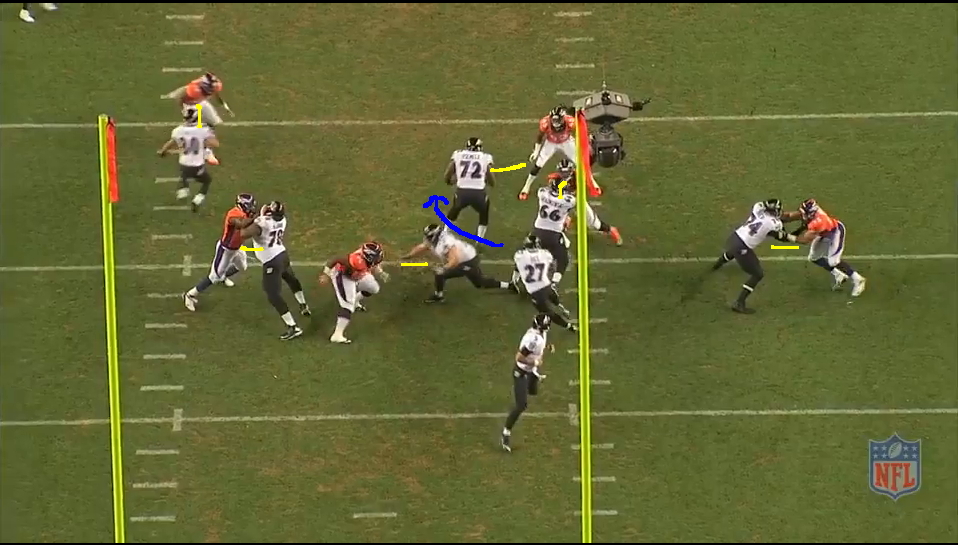 As the play develops after the snap, Marshal Yanda pulls to open up the crease for Rice. All the other blockers execute the play and Rice runs for a nine-yard gain.

OK, here's where the trouble starts. Before the Jones injury, the Broncos weren't loading the box. They respected the passing game. On passing plays, the Broncos were using mostly four-man rushes to pressure Flacco.

After the Jones injury, that changed.

Here's the second running play after Jones' injury, on a second-and-9: 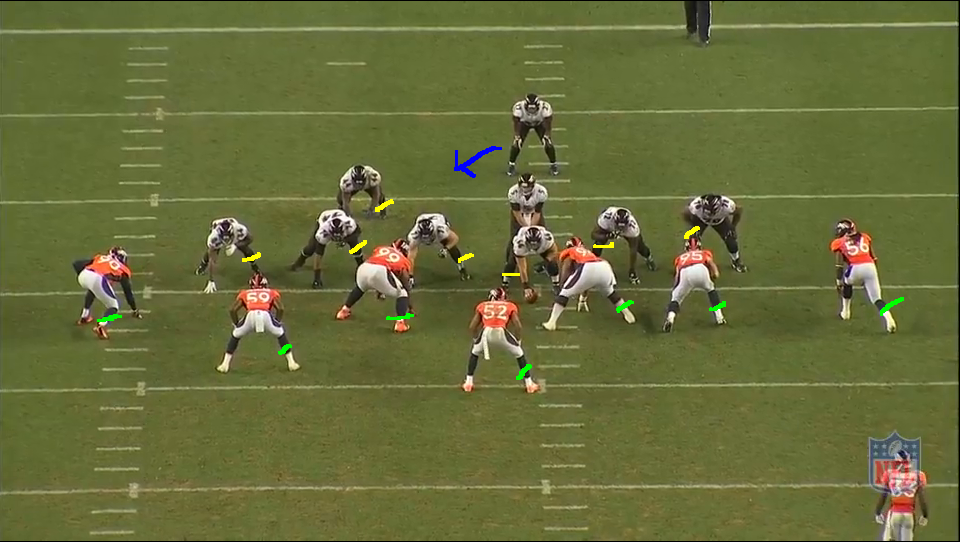 With seven blockers for Baltimore, the Broncos bring up seven defenders close to the line. With this shown, the Ravens have to win each matchup in what's about to be a muddled mass of bodies for Rice to spring open for a big gain. 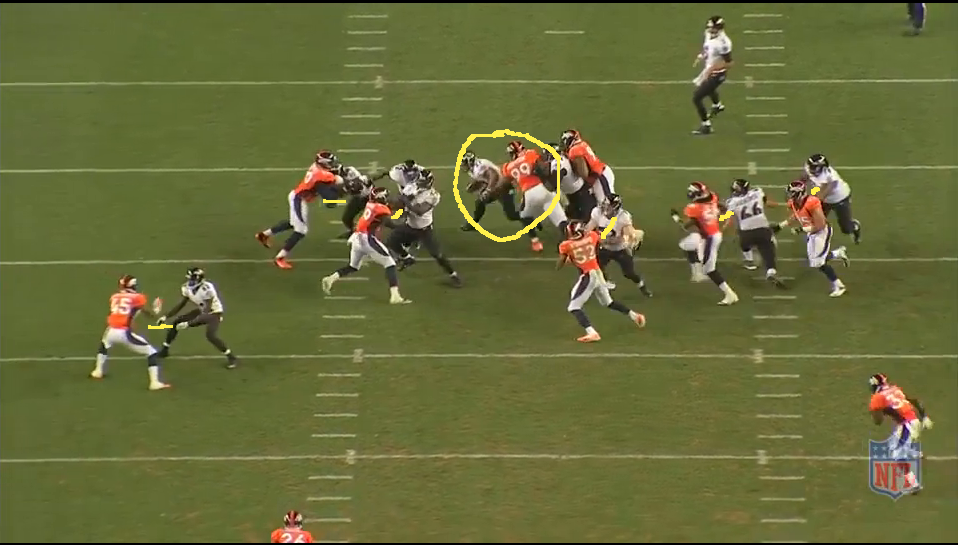 The Ravens' line does its best to win each battle but is unable to, with defensive tackle Kevin Vickerson stopping Rice for no gain.

For the rest of the game, the Broncos showed a lot of seven-man box looks, looking to win the battle up front. In the NFL, that's going to be copied, especially when it works.

Here's a look at a run from Rice during the Cleveland game, indicative of how the Browns' defense played the Ravens throughout: 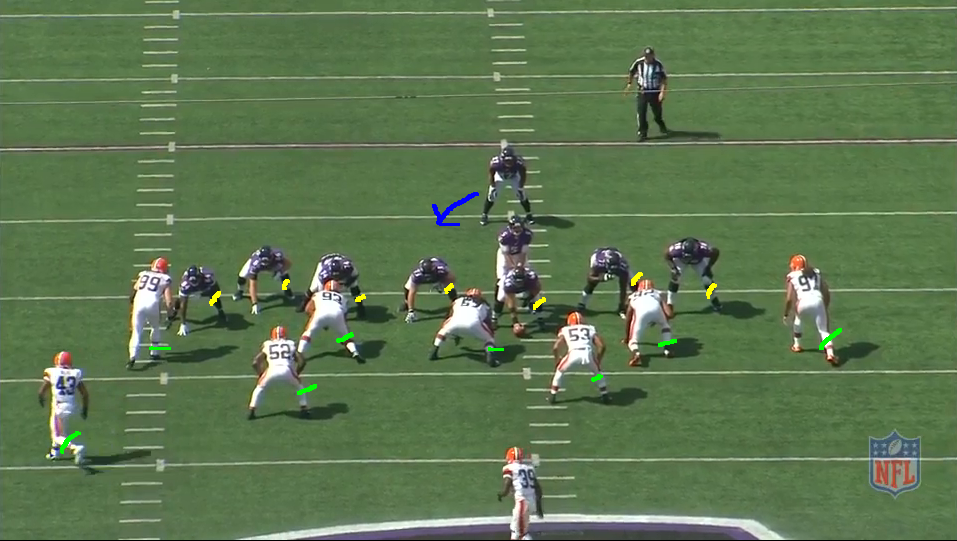 The Browns loaded up with eight defenders in the box, probably a smart move considering the Ravens have seven blockers on the formation. But it doesn't take a first grader to realize that you're facing an uphill battle when you begin a play seven vs. eight.

The Ravens need to execute their blocks and hope Rice can make someone miss. That's the only way a run for a big gain goes here. 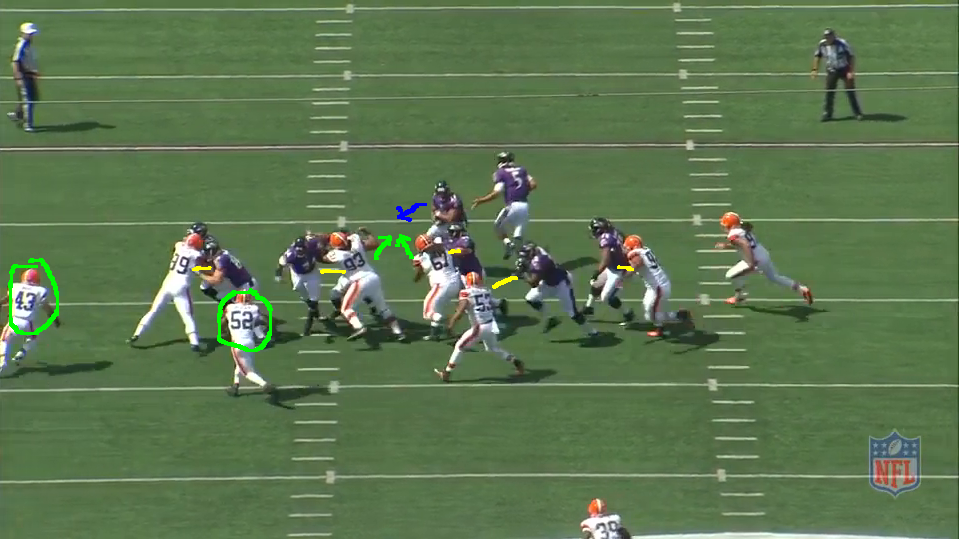 As you see here, it's hard to sustain blocks against a top-notch front. The Browns are able to key the play and stop Rice for no gain.

Throughout, the Browns played close to the line. With a good group of defensive backs and a stout front seven, the Browns can do this since there's no real threat of a downfield passing game with Smith being the only burner on the field.

Here's one more example of this: 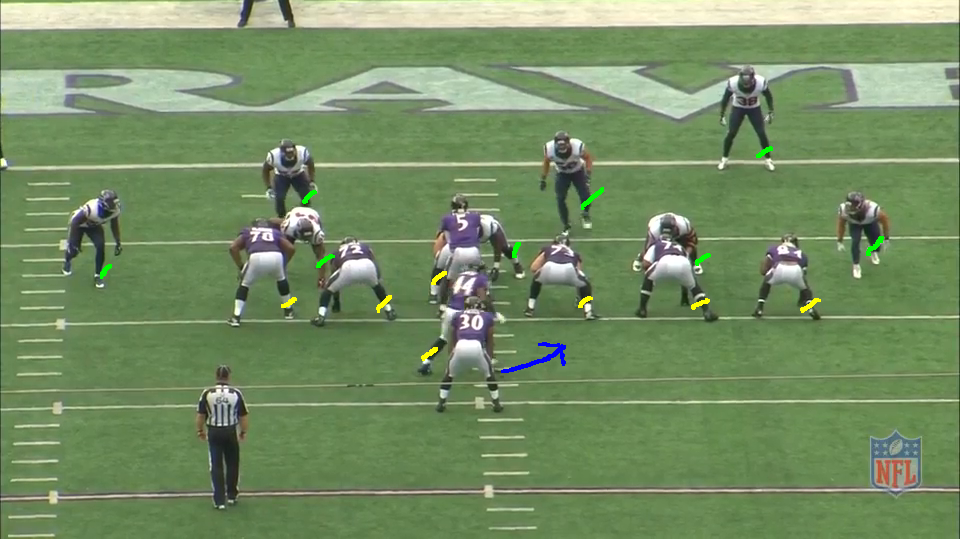 With the Ravens in the red zone, naturally the Texans would want to show eight in the box. But this was something, like the Browns, the Texans did for most of the game — whether it was seven or eight men playing near the line of scrimmage.

On this play, the Ravens actually block it fairly well, except for the simple arithmetic fact that blocking seven vs. eight will be tough no matter the opponent. 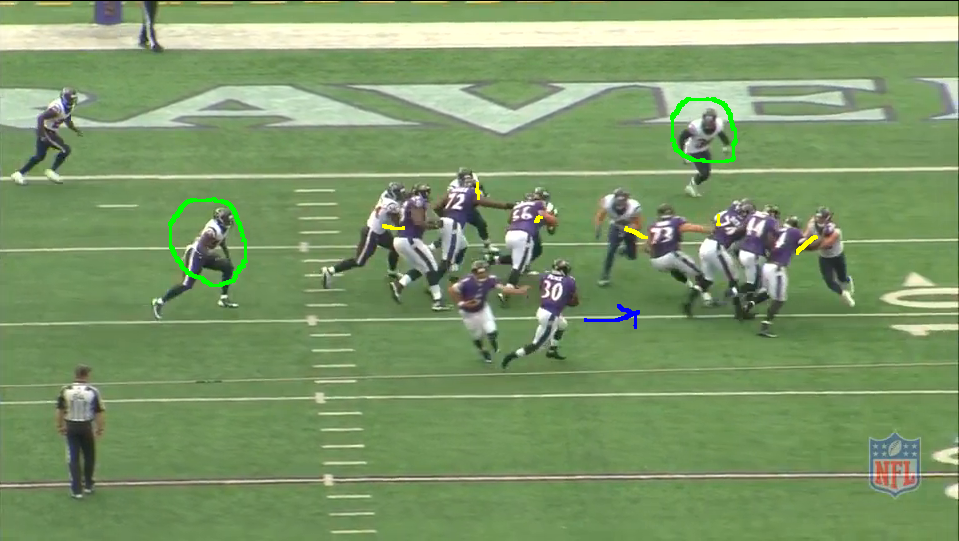 As you see, the Ravens' blockers take care of those on the line. One defender is taken away because it's a run to the right, but there's one more player left that has the ability to clean the play up before it gets going.

That would be Texans safety Danieal Manning, who, at the top, is coming down to read which hole Pierce will pick to run through. 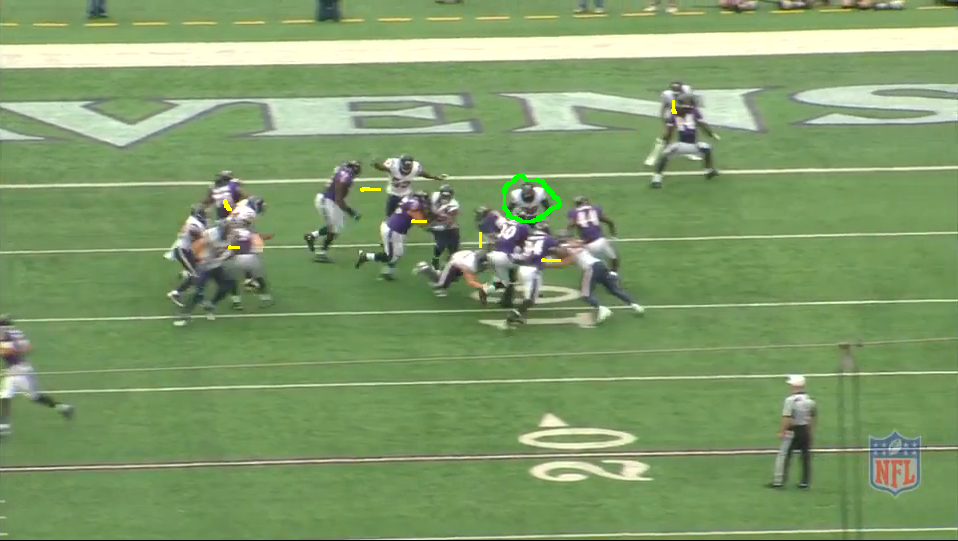 The Ravens were able to take care of seven vs. seven, but that lone defender, Manning, was able to make the play and stop Pierce for no gain.

As long as these kind of fronts continue, running the ball will be difficult unless the Ravens' execute at each point.

The Bills' defensive front isn't as talented as the first three that Baltimore has faced. But Buffalo still has Mario Williams and could decide to copy what previous teams have done, which could limit plays on the ground another week.

Until the Ravens get Jones back, this could wind up being the norm.

The Buffalo game will actually be a good indicator, given how badly the Bills have been gashed against the run so far. If the Bills are able to stop Rice (if he plays) and Pierce, then it's clear where the problem lies, and Jones couldn't come back soon enough.

If the Ravens are able to spring the backs for big yardage, then you can chalk a large percentage of Baltimore's early failures to the teams it was playing.

All that said, running the ball does come down to the kind of math we all learned as elementary school students. If you have more blockers than defenders, you have an advantage. If you don't, finding room will be a challenge.

Ever since Jones left the Denver game, the matchup advantages up front have decreased. For as long as the speedy receiver is out, the Ravens will need to adjust and figure out ways to find space in the running game.