How did perennial Ravens punching bag Tandon Doss return a punt for a touchdown? I take an in-depth look at Doss' clever use of angles and misdirection on his way to taking a punt all the way to the house.

Share All sharing options for: Breaking Down The Tandon Doss Punt Return

When Jacoby Jones went down with an injury against Denver, everyone expected the production of the Ravens special teams unit to take a major hit. Jones deservedly made the Pro Bowl as a kick returner in 2012, and losing him took away much of the dynamic playmaking ability that made the Ravens return team so valuable last year.

For the time being, the Ravens will have to rely on Tandon Doss returning punts. While some may groan, remembering Doss for his inconsistent play at wide receiver, his punt return for a touchdown against the Texans illustrates that he has the necessary tools to be a talented return man. 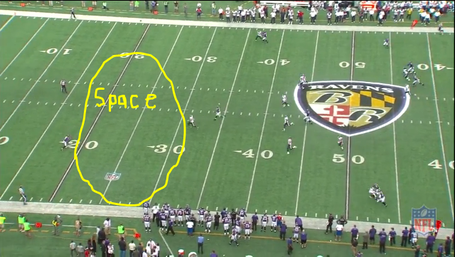 With about a minute left in the first half, the Texans punter Shane Lechler sends a booming punt all the way to about the Ravens 20 yard line. Fortunately for the Ravens, Lechler out-punts the Texans punt return coverage, giving Doss a lot of space to get a head of steam as he starts his return. 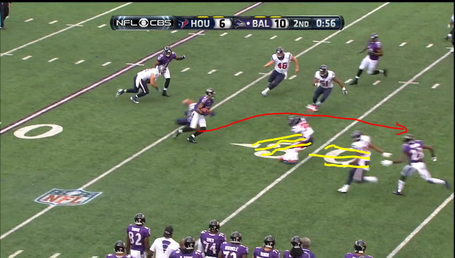 After making the first defender miss by running towards the sideline, Doss gets the Texans punt return coverage to make their first major mistake. Doss cuts back towards the middle of the field, completely fooling the Texans defenders who were over pursuing Doss. The yellow lines illustrate how the Doss gets the defenders to "flip their hips" and orient themselves towards the sideline. When Doss cuts back towards the middle, the outside defenders are stopped in their tracks, opening up a running lane in the center of the field. Doss takes advantage and blows by the Texans defenders. 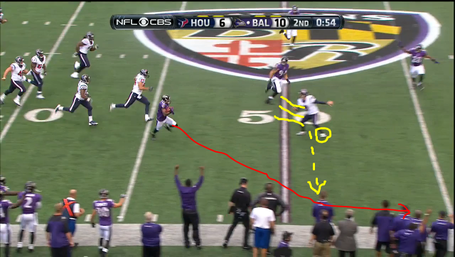 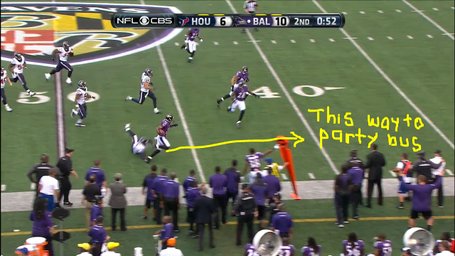 It's true that Doss is still a very raw prospect as a wide receiver. But this punt return shows he has an intuitive understanding of angles and misdirection necessary to succeed as a returner. With Jacoby Jones currently indisposed with a variety of...difficulties, the Ravens could do a lot worse than Doss as a kick returner for the time being.