Here are three matchups to keep an eye on during Sunday's Ravens-Texans game.

Share All sharing options for: Ravens-Texans matchups to watch 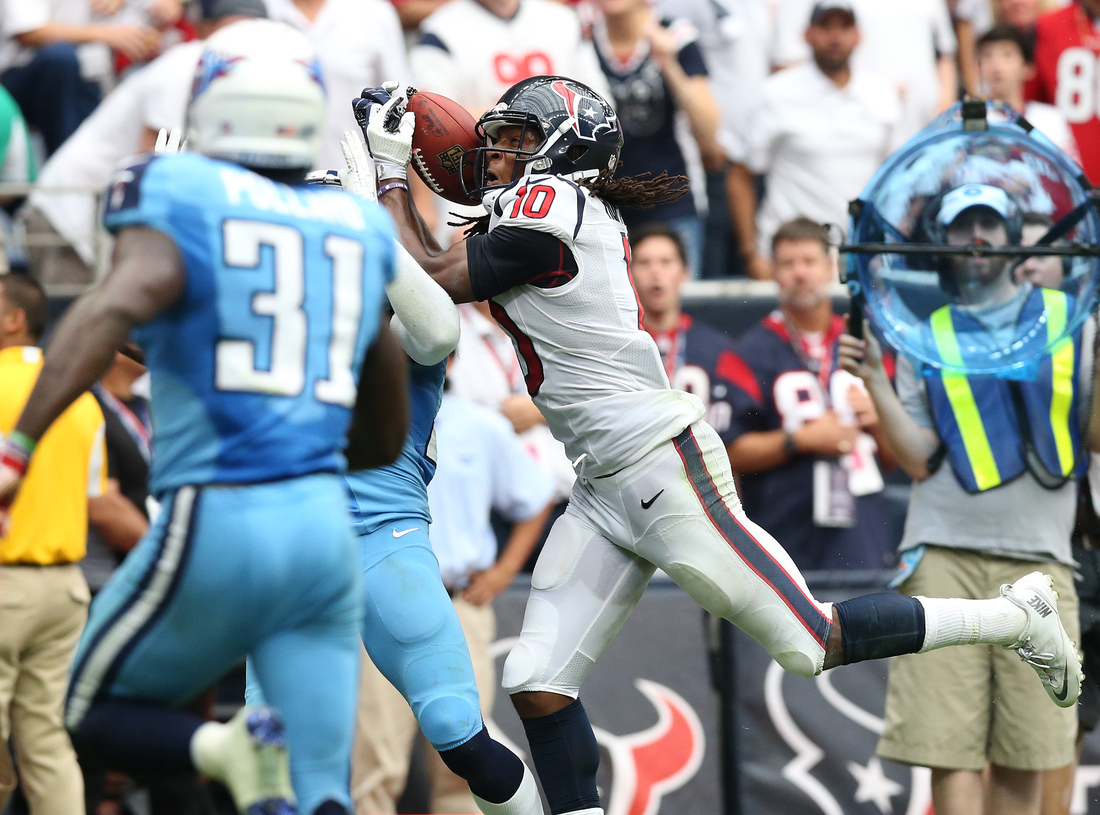 Andre Johnson is an elite receiver who will draw attention to himself. But DeAndre Hopkins could be the one Baltimore needs to stop Sunday. The Texans like to play him out against opposing team's left cornerbacks, which would be Lardarius Webb in this instance. Sure, he'll split out to the left side of the offensive formation occasionally, but it's preferred to get him on that side and allow Johnson to work against the right corner, creating a more favorable matchup.

Hopkins has deep threat ability but can also catch tough passes in traffic. He has elite agility for a rookie and should see enough targets come his way. Last week, he caught the game-winning touchdown in overtime to help Houston defeat the Titans.

The Texans also like to split Hopkins out wide to the right, only for a tight end to motion out past him. This creates a matchup between Hopkins and a nickel corner or linebacker, which is generally a mismatch. The Ravens will likely have Corey Graham in this role, meaning both Graham and Webb will need to be ready to defend Hopkins.

If the Ravens can limit the looks Hopkins get, the more one dimensional the offense will be. 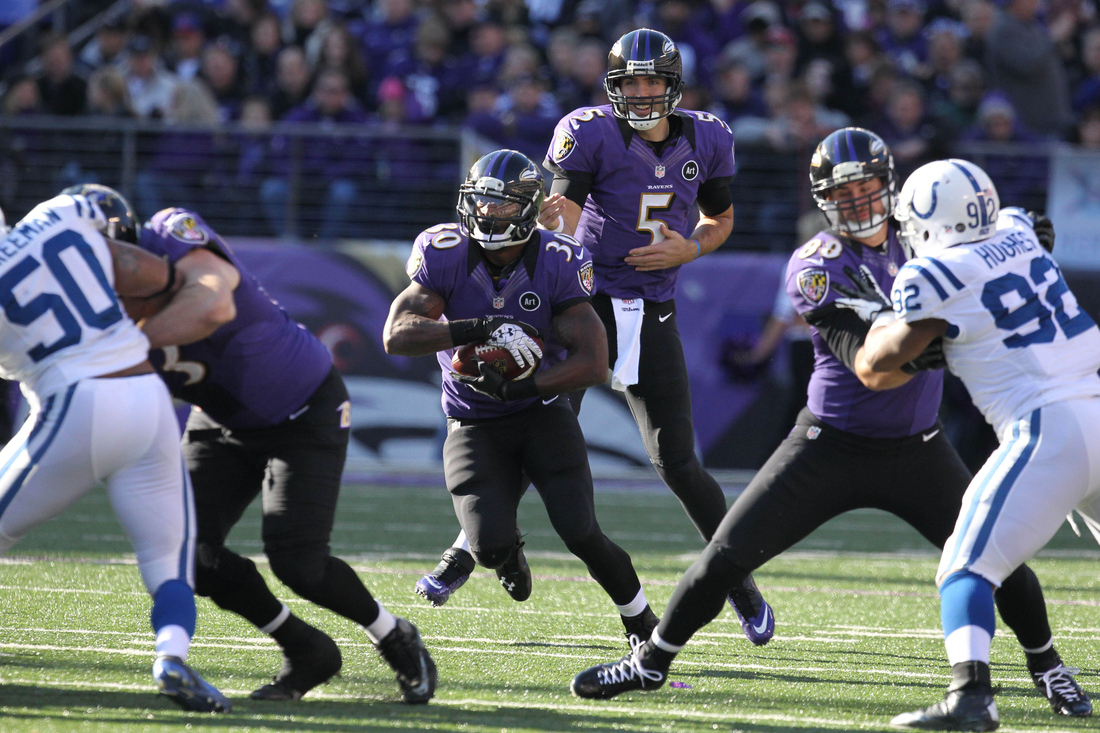 The Ravens' running game is averaging less than three yards per rush, which has been an uncharacteristic start to the 2013 season. Thing is, Denver began keying on the run once Jacoby Jones sustained his knee injury in the first half, which knocked him out for the season's first month. Cleveland followed suit. Without another deep threat, Baltimore's offense can't offer the kind of balance it would prefer.

The Browns shut down Baltimore's run for three quarters until Bernard Pierce reeled off some first downs in the fourth quarter. Pierce will be a focal point of the offense today with Ray Rice out due to his hip flexor injury.

The offensive line will need to generate a push today against a Texans unit that's giving up 99.5 yards per game. Strangely, that number, through two games, is only good for 17th best in the NFL. If the Ravens can win the time of possession battle and keep Arian Foster off the field, the better chance they will have to win this game. 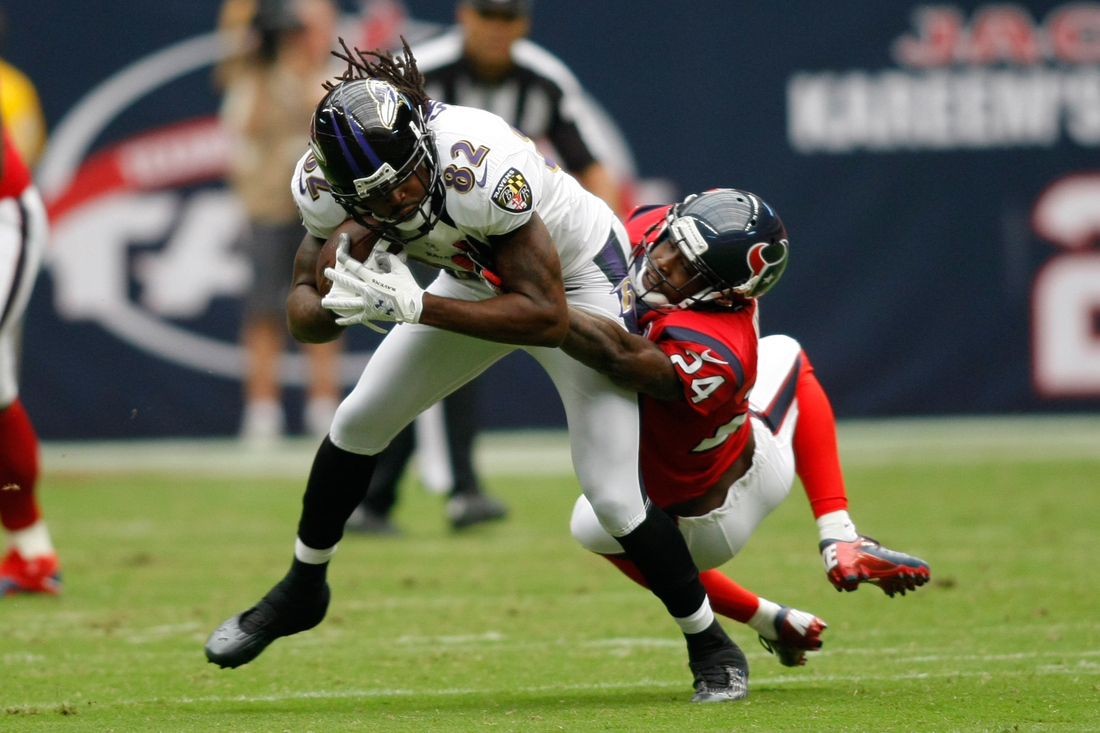 Last week, Smith was the only receiver to get off to a decent start, with the rest of the group slow out of the gate. Smith will need another hot start if he wants to get his teammates involved.

Smith has evolved into a complete receiver, someone that can fight through bracket coverage and run all of the short and intermediate routes. If Joe Flacco can get Smith some looks early, then that could open the game up for Marlon Brown in the second half.

Smith was held to just four catches for 41 yards a year ago, though that led the team in a 43-13 defeat to Houston. Texans cornerbacks Jonathan Joseph and Kareem Jackson will be tough to go against, specifically Joseph, who will try to take Smith out of the game in man coverage.

For Baltimore's offense to open up, all it will take is one play where Smith gets behind Joseph for a big gain. Smith's presence will be huge, as a big game from him could set up the rest of the offense as the game moves along.