I take a look at the film from the Ravens-Browns game and breakdown what went right and what went wrong.

After two weeks, the Baltimore Ravens are 1-1 after playing one of the league's best teams and one of the league's worst. It's hard to extrapolate all that much from these results about where in the league the Ravens fall, but this week's game gave us some valuable insight into what the Ravens did well and what they need to work on. This is my first film breakdown (!) for the Baltimore Beatdown, so please let me know what you think as well as letting me know what other film study you'd like to see in the comments.

Not only did the Ravens impress in the way they made Schwartz a liability for the Browns, it impressed in the variety of ways that they beat Schwartz to get to the quarterback. 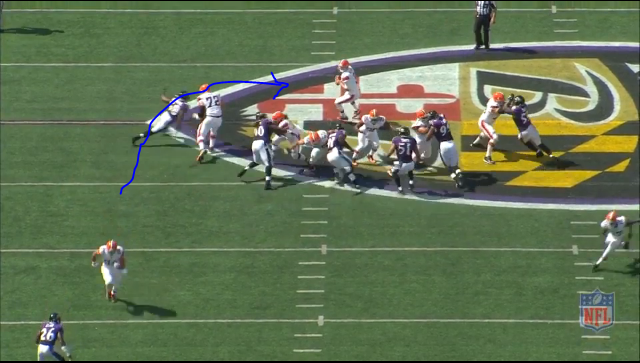 Elvis Dumervil, who was matched up with Schwartz for much of the game, rushed off the edge, using his speed to get to Weeden. Dumervil's short at 5'10", and his low center of gravity is allows him to quickly turn the corner on Schwartz. Unable to contain him, Dumervil blows past Schwartz and ends up getting the sack. 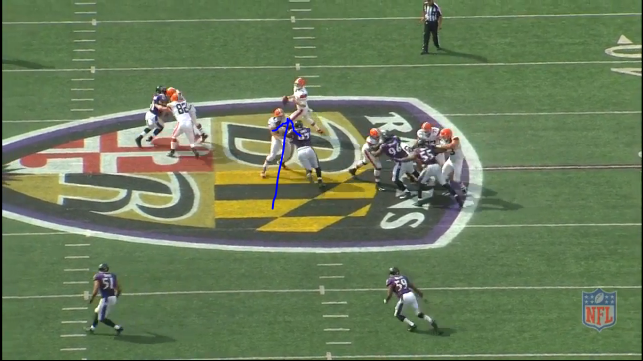 But the Ravens didn't just use speed rushing off the edge. Later in the game, Arthur Jones goes to rush the quarterback and Schwartz cleanly picks him up. However, Jones uses his strength to push Schwartz all the way back into the quarterback, registering a sack.

One of the things that makes the Ravens pass rush so brutal is that they have pass rushers that are effective in so many different ways. When an offensive line has a lot of weak links, like the Browns do, the Ravens rushers' vast array of strengths make it really difficult to hide those deficits.

One of the most pleasant surprises of the game was the success that Torrey Smith had against the Browns secondary. The Smith is by far the best wide receiver on the team, and would be covered by the top Browns cornerback in Joe Haden. Not only is Haden one of the better cornerbacks in the league, one of his specialties is stopping deep route receivers. I thought that between Haden's coverage and safety help, Smith was going to struggle mightily.

Turned out I was partially correct. Smith didn't really burn the Browns deep in coverage. But that didn't mean he wasn't successful. While Smith didn't have otherworldly numbers, he still finished with 7 receptions for 85 yards. Against the Browns secondary, he took advantage of the Browns defensive adjustments that anticipated him going deep and made them pay. I've highlighted a few examples below: 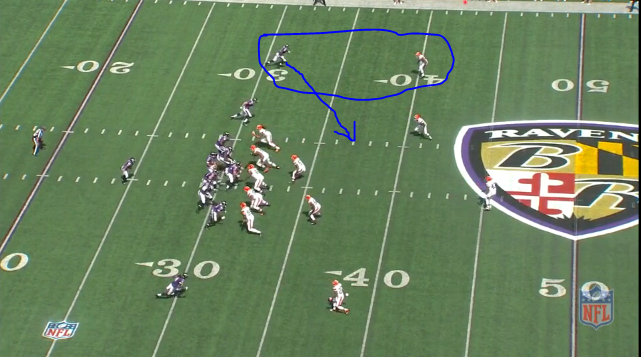 When the ball is snapped, the Browns cornerback is playing back off Smith, presumably to get a head start of what he thinks will be Smith streaking deep. Instead, Smith runs a slant route across the middle and uses his speed to make the most of the space given to him, finishing with an 11 yard gain.

Example # 2: Outside slant for an 8 yard again. 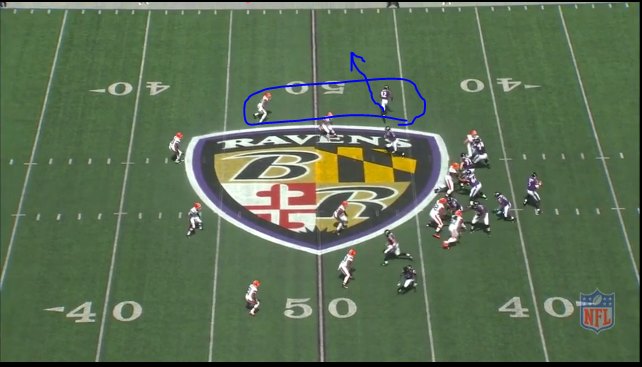 Again, Haden backs off Smith giving him a lot of space. Smith catches a pass and uses his speed for an 8 yard gain.

At the beginning of the year, I said that for Smith to be successful, he would need to run more crossing routes over the middle of the field. And as of now, it looks like he's doing just that.

One of the biggest mistakes of the Ravens defense came late in the third quarter, where the Browns would have scored a long uncontested touchdown if not for an errant throw by Brandon Weeden. Lets see where the breakdown happened. 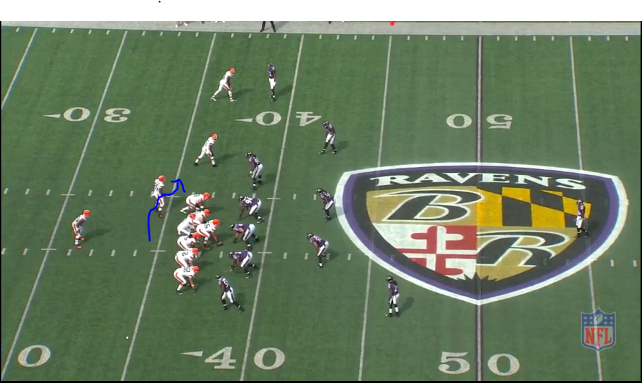 The Browns have two wide receivers line up to the left and Trent Richardson and Chris Ogbonnaya lined up behind the quarterback, which screams running play. However, not all is as it seems. Ogbonnaya shifts to the left side of the field with the other Browns receivers and no Ravens defenders pick him up. 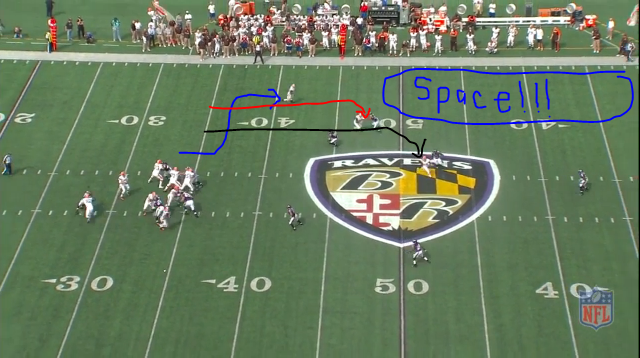 The two Browns receivers cut over the middle of the field, while Ogbonnaya cuts towards the sideline, totally uncovered. If not for an errant Weeden throw, Ogbonnaya would have easily scored a touchdown, even with the deep safety. In the future, the Ravens need to keep a careful eye anyone who shifts out of the backfield. In this instance, it almost cost the Ravens the lead.