The Ravens, Tyrod Taylor And The Read-Option Sweeping The NFL

Tyrod Taylor has the ability to make plays with his feet. Could the Ravens be inclined to hop on board with the read-option trend sweeping the NFL.

Share All sharing options for: The Ravens, Tyrod Taylor And The Read-Option Sweeping The NFL

I'll preface this by saying I became a fan of the read-option when Rich Rodriguez began lighting the scoreboard up at West Virginia.

Those offenses were incredible to watch, beginning with Pat White at quarterback and Steve Slaton at running back. Rodriguez, credited as the mastermind of the spread option at the college level, figured out a way to win games with lesser talent.

In addition, that man generally goes unblocked by the offensive line, meaning the scheme itself takes that defender away from the play. In a way, the read-option, when executed, uses 11 offensive players to a defense's 10.

That said, it's as simple of a scheme in the game of football. Yet when you get a dynamic playmaker at quarterback with a capable running back behind a stout offensive line, and at least one deep threat at receiver, it's near impossible to stop -- at least at the college level. Sure, the Alabamas of the world will have the speed and discipline on defense to limit the read option's success. But look around the college football landscape. It's been successful for about a decade, with college defensive coordinators now praising the offense's difficulty to stop. NFL coaches still seem confident they'll rid the scheme from the professional game.

Rodriguez's offense has succeeded everywhere he's been, even though he failed as a head coach when he was with the University of Michigan for three years. In Rodriguez's last season in Ann Arbor, his quarterback, Denard Robinson, now with the Jacksonville Jaguars, threw for 2,570 yards and added 1,702 yards on the ground. Robinson became the first NCAA quarterback to pass for 2,500 and run for 1,500 in a single season. The only problem was Rodriguez's defenses couldn't stop a nosebleed.

On to his next job, Rodriguez, now coaching Arizona, is already seeing positive results with his offense as he enters year two.

(Before I launch into the point of this post, I suggest all football fans to read the book Three and Out: Rich Rodriguez and the Michigan Wolverines in the Crucible of College Football, written by John U. Bacon. It talks about the early spread option Rodriguez envisioned, why he failed at Michigan and how mind-boggling big-time college athletics can be.) 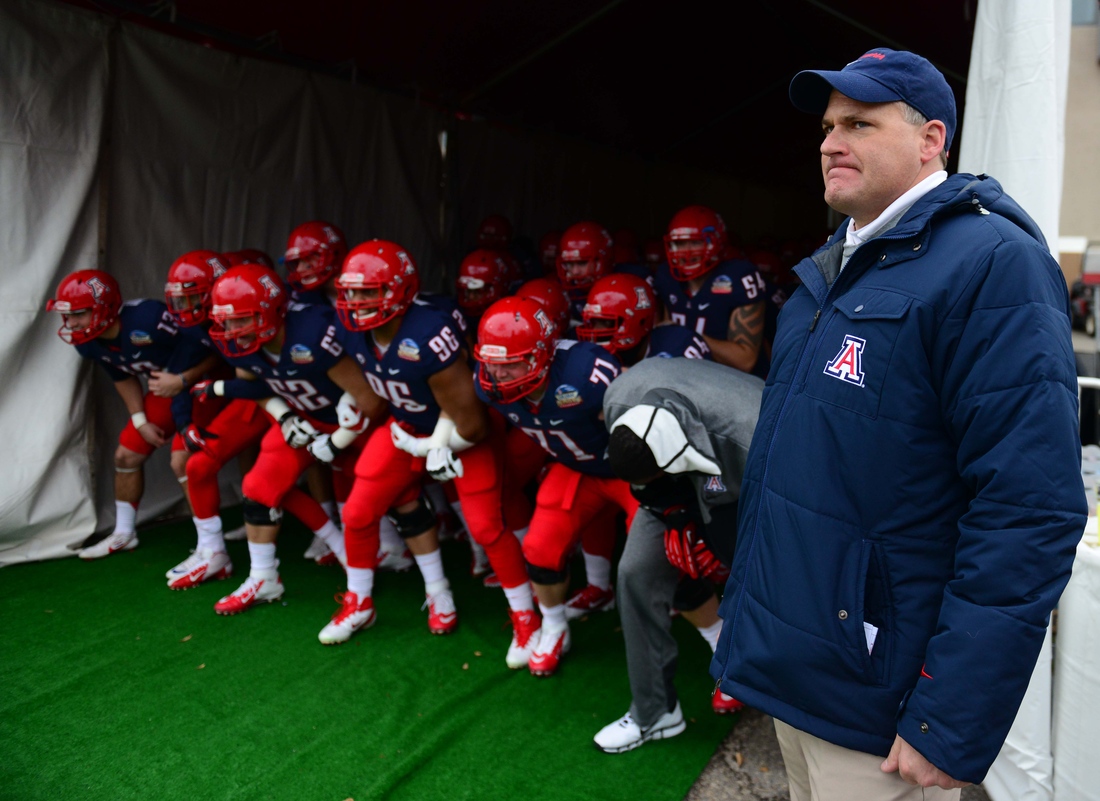 This offense works at the college level, especially at teams that don't necessarily recruit the best traditional talent, because of the speed you can still obtain with undersized players at quarterback, running back and receiver. Tavon Austin, though an NFL talent nowadays, may not have been viewed as such 20 years ago, being that he's just 5-8 and 174 pounds.

Even as recent as three or four years ago, I could've never envisioned the read-option's transition to the NFL. I don't think many others did either. That is until Cam Newton, Auburn's Heisman Trophy winner that led the school to a BCS National Championship in 2010, began running it with Carolina two years ago with success. Then along came Robert Griffin III, Russell Wilson and Colin Kaepernick a year ago. Kaepernick, in fact, had his own option package as a rookie and through the first half of the 2012 season before taking the starting job for Alex Smith.

Contrary to our initial beliefs or concerns, the read option worked. Despite the simplicity of it, the concept remains tough to defend. You can't give ground to receivers split wider than they used to be. A quick hot route fixes will hammer any defense if you do. Even though defensive ends and outside linebackers are light years faster than those at the college level, quarterbacks and running backs are also of an elite breed. It's not as simple as it would be for the NFL's top defenses to contain past pro-style quarterbacks such as Randall Cunningham and Steve Young, or even someone like Michael Vick, who made a living in Atlanta with his running ability.

The initial comparison skeptics give with the read-option is the Wildcat, though that never caught on for an obvious reason: it's a run-only formation. Once coordinators loaded the box with eight or nine defenders, the formation became useless. Running backs can't throw the ball down the field like Griffin, Wilson, Kaepernick and Newton can. You load the box against the read-option and a quarterback will burn you deep.

All of that brings us to this point. The Ravens have a Super Bowl MVP at quarterback in Joe Flacco. They paid him a $120.6 million contract. He's going to be a Raven for life, that is unless he has either a Johnny Unitas or Peyton Manning moment, where the time simply comes for the organization to part ways when he's not ready to retire.

Behind him on the depth chart is Tyrod Taylor, a conventional pro style quarterback with legitimate 4.4 speed. Taylor didn't grow up running read-option. He operated out of a pro-style offense at Virginia Tech for four years, setting all sorts of records with the Hokies. He just happened to have the kind of speed that let him create plays on his own or scramble for yards when plays broke down.

Taylor's done that when given the chance in Baltimore. He ran for just 73 yards in 2012, though 65 of those came against the Bengals in the season-finale, a game Baltimore rested its starters.

A week ago, Taylor ran the ball for 27 yards on five carries against the Buccaneers.

Noticeably, however, isn't the fact that the Ravens are using Taylor as a traditional backup within the offensive scheme. Taylor ran some read-option in the season finale a year ago (not effectively, mind you, as he rarely put the football in the running back's belly while reading the defender to either pull the ball out or keep it there.) So far this preseason, he's been given a few option plays during practice, and saw at least one that got a sizable gain against Tampa Bay a week ago.

No, it's not like Taylor is being groomed for a large option role on offense. And it actually serves the Ravens well to use Taylor in this role during practice to help prepare the defense in case they see the look, though the lone team with a running quarterback on the 2013 schedule is Buffalo, which drafted quarterback EJ Manuel in the first round.

But Taylor's presence has apparently given the Ravens something to think about.

"He's a pretty versatile guy. He does just a little bit of everything - he can throw the ball well [and] get out of the pocket," offensive coordinator Jim Caldwell said during his Monday's media availability. "We just tried a couple of things with him to see if it suited the system, and he's been able to do quite well with it. We've been experimenting a little bit, and we'll see how it goes." 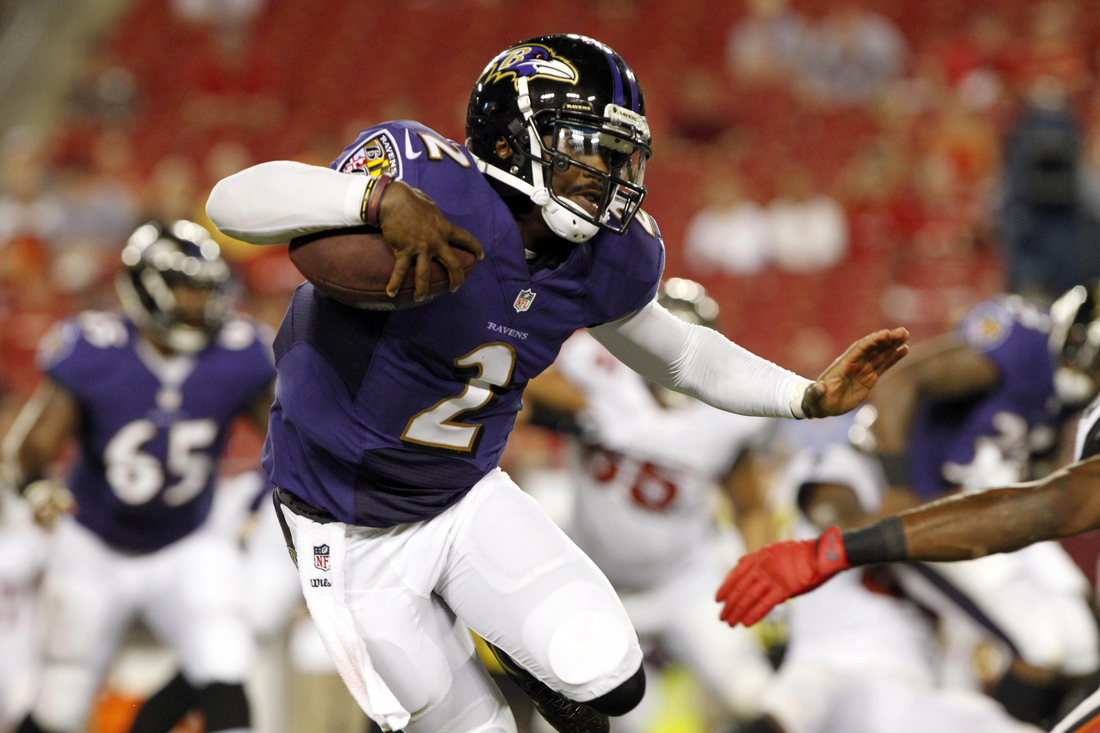 The NFL's a copycat league and teams are always trying to keep up, if not ahead, with each other. With the option having surprising success over the last couple of seasons, the Ravens could look to use it on occasion if they think it can succeed in a given situation.

Of course, you run the risk of injury in doing so. If Baltimore keeps just two quarterbacks on the roster, risking injury to your backup could prove problematic. It's one of the reasons you'll probably never see a full-time read-option quarterback at the NFL level. Over a 16-game regular season schedule, there are just too many hits for a quarterback to absorb.

Then again, as it pertains to this situation, it all enters into a risk/reward equation, with the coaching staff trying to figure out the best way to find potential success on the football field.

"We don't put him out there thinking [we're] trying to prevent injuries or anything of that nature," Caldwell said. "Obviously, we look at it and try to make certain we put him in the best possible position to demonstrate his talents and abilities. But nevertheless, we don't plan on getting him hurt. We try to keep down the number of times he gets hit and things of that nature, because he's not a running back -- he's a quarterback. Taking as few hits as possible is extremely important for us."

The NFL evolves with each season, with trends popping up here and there, almost unexpectedly. This one has been more intriguing than others, based on the fact that the NFL has gone two full seasons seeing success with read option concepts. Defensive coordinators made tend to write it off, much like college coaches did forever.

But here's a good example of why there might be a place for the concept, using the theory that you can defeat teams with lesser talent using the scheme: Appalachian State employed the read-option and other spread concepts to defeat Michigan in college football's greatest upset in 2007. Outside of Brian Quick and Armanti Edwards, there aren't many other names that come to mind from that offense that defeated a Michigan defense that featured current and former NFLers Stevie Brown, Shawn Crable, Brandon Graham, Tim Jamison and Terrance Taylor.

That game, if you read Three and Out was partially one of the reasons Michigan was open to bringing in a coach with a spread offense.

You often hear skeptics say defensive coordinators will adjust and figure it out. Then again, if it was that simple, considering the simplicity of the read option itself, then it would have probably happened by now. So far, it's easier said than done.

This may be the year we see whether the read-option has staying power in the NFL. It very well could fizzle out given the added attention front offices have applied to defensive ends and outside linebackers.

Just don't be surprised if the Ravens to decide to test the final part of this hypothesis out, to find out if the read-option does have a place at the highest level of football.

Next Up In NFL