Ravens Training Camp: What We Now Know After the First Week

With almost a week's worth of training camp in the books, here's a look at what we've learned so far.

Share All sharing options for: Ravens Training Camp: What We Now Know After the First Week

The Ravens spent the early portion of the offseason busy building a better defense.

For the first time under John Harbaugh, the Ravens fell outside of the top three in total defense, ranking 17th overall at 350.9 yards allowed per game.

Baltimore upgraded the defensive line by bringing in Chris Canty and Marcus Spears, and added Elvis Dumervil to aid Terrell Suggs in the pass rush.

Offensively, the Ravens locked up Joe Flacco to a long-term deal worth $120.6 million, but parted ways with receiver Anquan Boldin by trading him to San Francisco for a sixth-round pick they later traded so they could move up and select linebacker Arthur Brown in the second round of the 2013 draft.

The offense is relying on young, skill-position talent to accompany Flacco and running back Ray Rice.

So how has all of this translated to the field in training camp?

1) The defensive front should be improved 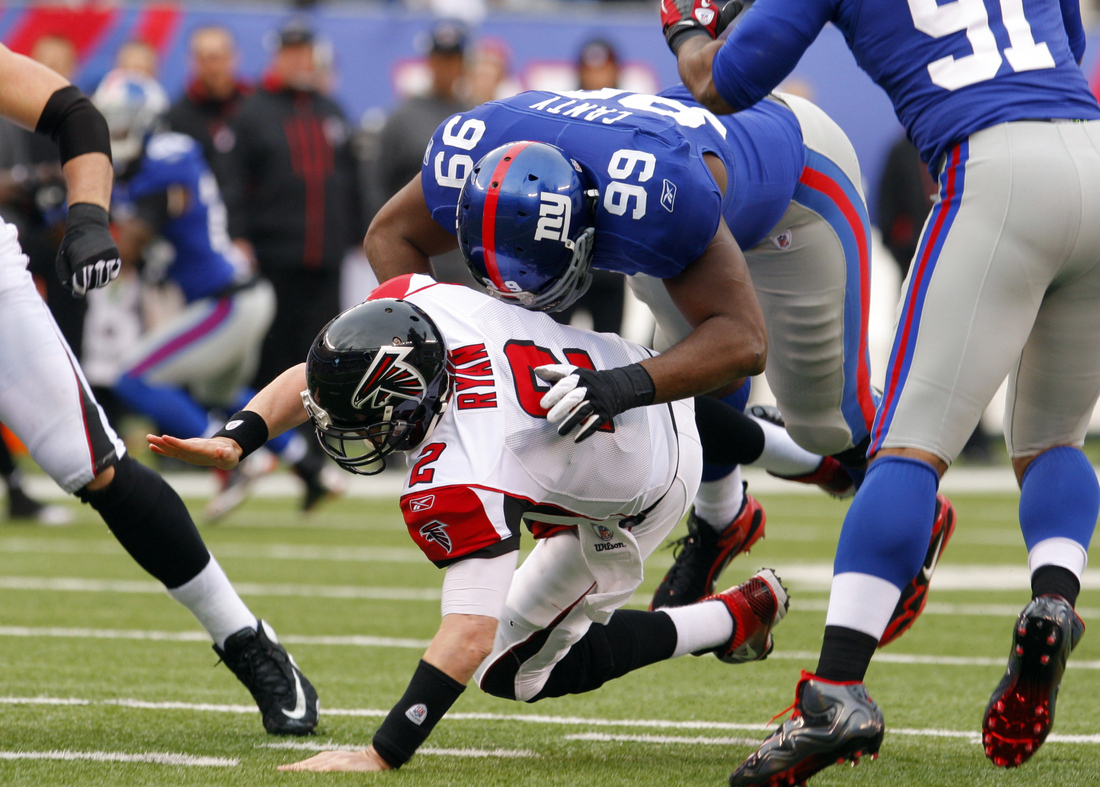 It's only been one week but this defense has the makings of possessing one of the better fronts in the NFL. Haloti Ngata came to camp lighter with his sprained knee all but healed. He's moved in and out of nose tackle and three-technique (lining up over the shoulder of a guard) defensive end during the first week of camp. A year ago, Ngata was forced to play the five-technique (lining up over the shoulder of a tackle) which was a bit different for him.

Baltimore's hybrid 3-4 requires linemen to play both the three- and five-technique spots. Five-technique defensive ends are generally quicker and can generate a rush on the outside. Ngata prefers to work inside. A season ago, the Ravens had little depth on the defensive line, which forced Ngata outside and placed Pernell McPhee at the three-technique at times. It exposed McPhee to injuries against interior offensive linemen. McPhee, who had a standout rookie year in 2011, was also unable to generate a push inside.

This should change with Canty and Spears on board. Canty is ideal to be the five-technique lineman, due to his 6-7, 317-pound frame and noted athleticism. Spears is a versatile lineman whose skill set is geared toward stopping the run. The Cowboys wanted more of a pass-rush presence, which is why they released him. The Ravens struggled against the run at times in 2012, making Spears a fit to help fix that.

The two additions, along with third-round draft pick Brandon Williams, also allow a lot of mixing and matching to happen on the defensive front. Depending on the situation, the line will be able to put forth a group to match up better than it did a year ago. Mid-season in 2012, Baltimore had to rotate Courtney Upshaw into the nose tackle spot in one of the substitution packages. With the depth along the line, that shouldn't be a problem.

Whether it's a 4-3 or a 3-4, most coaches agree that a defense's success starts with the defensive line. As of now, at least what's been shown in training camp, Baltimore's three best linemen are Ngata, Canty and Arthur Jones. It wouldn't be a stretch to see Ngata open the season as the starting nose tackle. He can then rotate into the three-technique in the sub package and allow Williams to rotate in. If it's third-and-short, Spears can come in and play the short-yardage play. If it's third-and-long, Canty can stay in, or McPhee can drop down from outside linebacker to the five-technique and rush the passer.

"With Chris and Marcus in, and Arthur doing his thing, we can do a lot of things with pass rushing," Ngata said. "It’s going to be tough, because you have our outside guys with [Courtney] Upshaw and Elvis [Dumervil] and Terrell [Suggs]. It’s going to be real tough, I think, to block us." 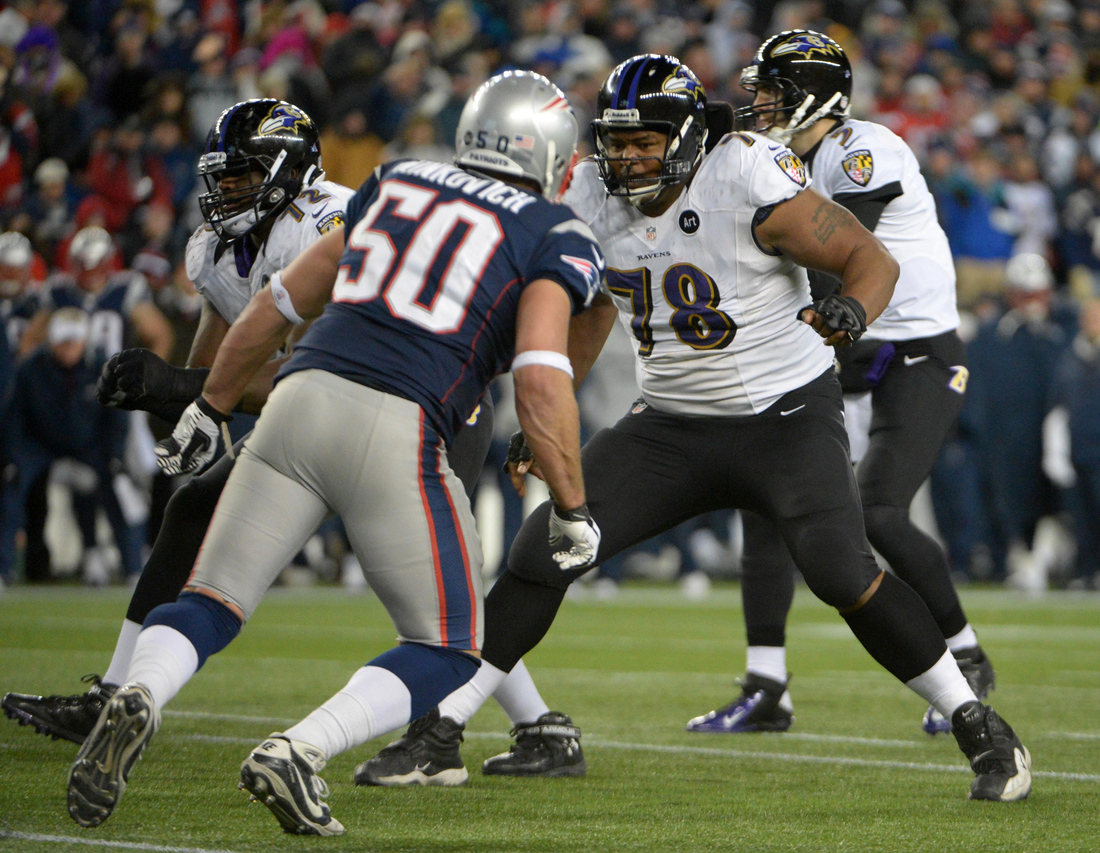 (Bryant McKinnie came to camp overweight and out of shape, but could still open the season starting. -Kirby Lee, USA TODAY Sports)

McKinnie struggled with his conditioning in the first week of training camp. He reported too heavy to the point coach John Harbaugh kept him from practicing when the first full practice opened last Thursday. Harbaugh expressed his disappointment in McKinnie, especially considering he spent the majority of his time during the offseason working out at the team facility.

Even so, McKinnie has been practicing every day since. He's learned the hard way that he needs to be in condition at all times if he wants to keep his spot. He couldn't go longer than half of last Friday's practice. In each ensuing practice, McKinnie has to take breathers to gather himself. During Monday's session, McKinnie looked like he wanted to throw up.

Through all of the conditioning issues, McKinnie powered through practice and received plenty of reps with the first-team offensive line. When he reported five days late to camp in 2012 -- out of shape and injured -- he lost his spot and didn't get it back until the postseason.

The four best guards and tackles, when each are playing at their highest level, are McKinnie, Kelechi Osemele, Marshal Yanda and Michael Oher.

But let's play devil's advocate for a moment, though. Say, McKinnie doesn't start on Sept. 5. Who will it be? Well, it won't be Oher. He's sticking at right tackle and has all offseason. When McKinnie didn't practice last Thursday, Osemele filled in at left tackle. The Iowa State product was a left tackle in college and feels comfortable there. And when Osemele tweaked his hamstring, the Ravens put rookie Ricky Wagner at left tackle. Keeping Oher on the right side has given him continuity, considering he's moved between positions his entire career.

"Michael having a chance to play on the right side throughout the whole offseason and through training camp should be a real benefit for him," Harbaugh said. "He’s had to make that move back and forth, and that makes him very versatile, but it’s going to be good to get all of those reps under his belt going into the season."

3) More receivers will be involved in the passing game 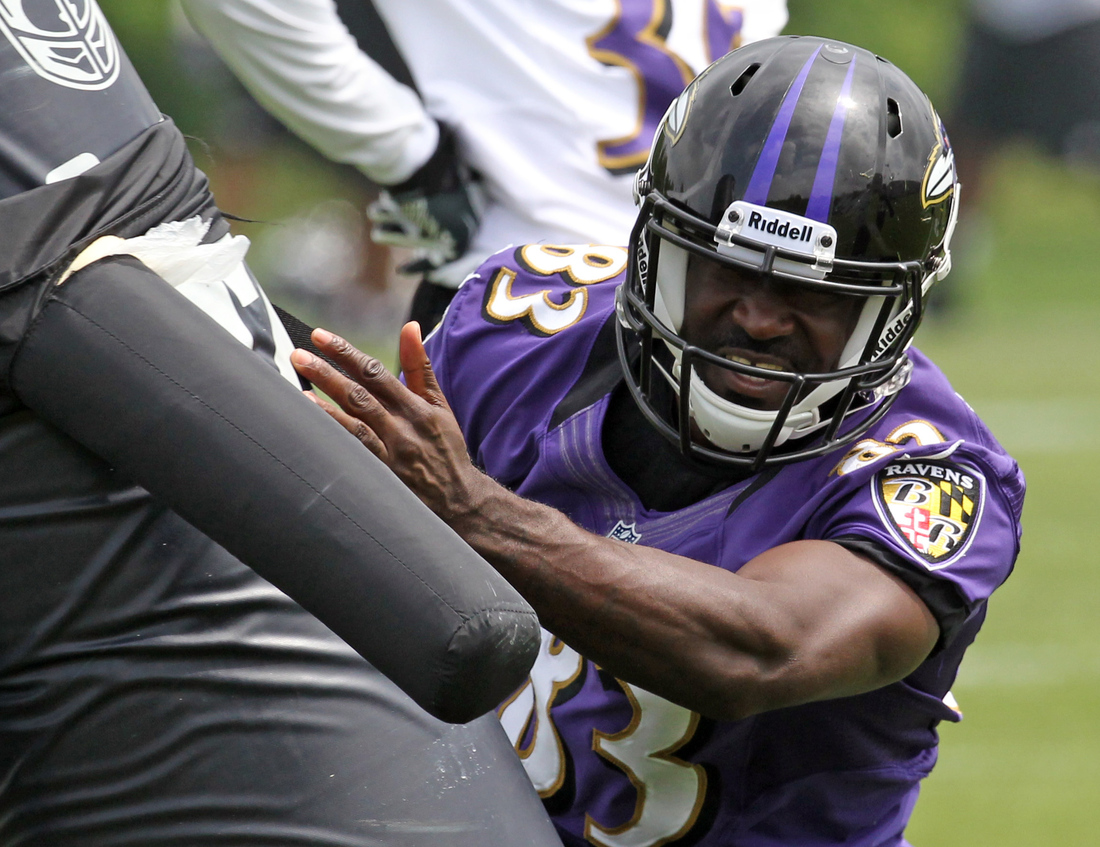 In previous seasons, the Ravens have used the same three receivers throughout games. Occasionally, a fourth would come in, but for only a play or two here and there. That doesn't appear to be the case anymore.

The Ravens have been busy rotating four receivers in and out of the first and second teams. With Torrey Smith the only mainstay on the first team, Jacoby Jones, Deonte Thompson, Tandon Doss and David Reed have all seen their fair share of reps with the first team, with Jones, Thompson and Doss receiving an equal amount. Reed is getting a little less, but certainly could be a factor this season.

"More so this year there's going to be more of a rotation based on plays and situations in games with who's going to be in," Doss said. "We have a talented group this year and we all bring something different."

Thompson has stood out the most, showing why he was worthy of five-star status coming out of high school. Doss has been filling the Anquan Boldin role as the possession man underneath. Jones has stayed mostly outside at receiver, which is where he'll likely line up. Doss and Thompson are proving versatile enough to line up wide and in the slot. LaQuan Williams has made the team the past two seasons but injured his arm early. He'll certainly have a chance to prove he's worthy of a roster spot once again when he returns.

Another intriguing receiver is rookie Aaron Mellette. His body control and adjustment on the ball has stood out, though he's mostly receiving reps with the second team. Tommy Streeter has made a few catches, though he hasn't had the kind of camp those in front of him have had.

The receivers are young and unproven but there's a lot of talent and potential. If they can make enough plays during the first couple of preseason games then the Ravens won't feel inclined to seek out a veteran body like they were forced to do in 2011 by signing Lee Evans.

"We have all grown so much over the years, and everybody is continuing to get better each and every day out here," Smith said. "I think the biggest thing for us is to all become consistent in everything. I think that’s the key to becoming successful in this league and as a group."