Stuck on the sideline for Baltimore's 34-31 Super Bowl win over San Francisco, Lardarius Webb wants a chance to participate in one.

It was a bittersweet moment when Lardarius Webb saw the confetti fall from the Mercedes-Benz Superdome.

The Ravens were world champions, having defeated the San Francisco 49ers 34-31 in a championship game that contained everything imaginable -- a hot start (Joe Flacco's early touchdowns), a dramatic pause (half of the stadium's lights turning off), a gripping comeback (Colin Kaepernick putting the Niners on his shoulders) and a goal line stand (Ray Lewis and company all but securing a win.)

But Webb was on the sideline, having sustained a torn left ACL during a 2012 midseason game against Dallas. For Webb, he'd worked tirelessly to get to the pinnacle of a Super Bowl appearance, only to be there as a spectator on the sideline.

He has a ring, though, and there's no denying Webb is a Super Bowl champion. He couldn't control the fact he was injured.

But Webb knows the feeling is different. He didn't get to play in the prized game only a handful of NFL players, in relation to the history of the league, have participated in.

"It was a good feeling on the sideline, so I can imagine how good it felt to actually be out on the field and just be playing -- make some tackles and make some plays," Webb said. "I feel like a champion, but I'm motivated to get back, just like a couple of the other guys on my team, like [Elvis] Dumervil, some new guys - [Michael] Huff. We're all motivated to get back to that championship. That's what we want to do." 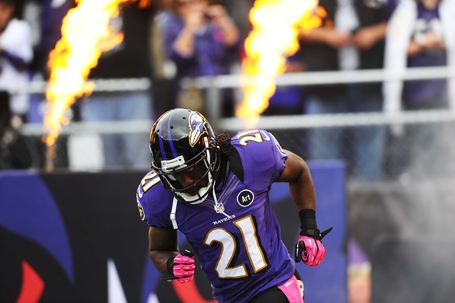 Webb's entering that next phase in his career, where he's no longer the young, eager cornerback looking up to veterans for advice. In one offseason, Webb became that veteran the younger players seek out.

His play in 2011, which placed him among the better cornerbacks in the NFL and earned him a $50 million contract the following offseason, garnered respect from his teammates. He went from fighting for a rotational spot to being Baltimore's No. 1 cornerback by the end of the season

Webb participated on a limited basis during Thursday's first full training camp practice, with the Ravens electing not to put him on the physically unable to perform list. Webb's trusting his knee, he said, and believes he'll be able to make all the cuts he could make before the injury.

"I think I can be Lardarius Webb again," he said with a smile.

It's been less than a year, but Webb's rehabilitation is ahead of schedule. Webb appears to be on-target for Baltimore's season-opener against Denver on Sept. 5.

"It's reasonable that he would be playing against Denver with a state of ACL surgery in recovery," coach John Harbaugh said. "That's definitely our target. I think he has a very good chance to get back and play in the preseason at some point in time, but it's not the most important thing, but it would be helpful. He's out here practicing. We are kind of easing him in. He can probably do more than we are letting him do, but we aren't going to push it ahead of schedule too much."

Webb said the first week after his ACL surgery was the hardest throughout the rehab process. The pain was tough and he didn't feel like doing much.

Webb decided to dedicate himself to getting back returning in time for the 2013 season. He'd experienced this kind of injury before, tearing his right ACL during the 2009 season. He knew how to approach the rehab process, by rehabbing smart and remaining patient, all while working harder than he did the first time around.

With Ed Reed leaving for Houston via free agency, Webb is the player the young corners, and even veteran newcomer Michael Huff, are looking to for guidance. Webb's now a go-to guy on defense, who's acting as an extension of the coaching staff on defense.

"There are guys like Lardarius Webb, who is standing right back there, who is a great leader," Harbaugh said. "Over the course of the next how many years that he's in Baltimore, you will see that first hand. Many years down the road when it's time for him to hang up the cleats, the same question will be asked about Lardarius. That's just the cycle of life and that's just the cycle of football."

Webb wasn't ready to call the current unit his secondary just yet. Maybe he doesn't feel he's earned the distinction Reed had before he left. In his eyes, he may still need to prove he deserves distinction one day, given he's only entering his fifth NFL season.

"One day, yes, I would love for it to be my secondary," Webb said. "That's why I come here every day and bust my butt, because I want to be the leader in that backfield."