Bryan Hall's working at a new position and Coutney Upshaw wants playing time. Here's a photo showing the results of the two, and other teammates, training for their goals.

On Friday, it was reported that Ravens outside linebacker Courtney Upshaw had lost 20 points while training at TZ Sports, a training facility located in Eldersburg, Md.

And earlier this offseason, it was reported that Bryan Hall had lost up to 40 pounds and was down to 255 as he transitions from the defensive line to inside linebacker.

To show the hard work Hall and Upshaw, as well as teammates such as DeAngelo Tyson, Arthur Jones and Jack Cornell, put in, he posted this picture on his twitter feed, @BryanHall95 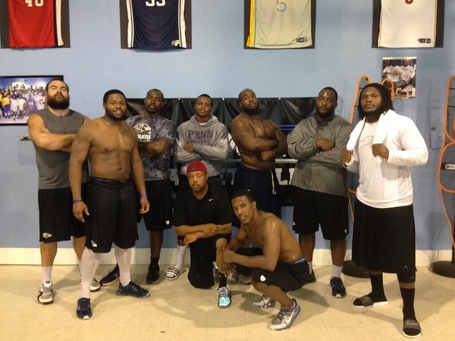 Hall played the 2012 season at 295 pounds. He doesn't look like that anymore. Upshaw has slimmed down and looks like the linebacker he wants to be.

The Ravens will certainly take notice of the work these two players in particular have put in this summer. For their sake, hopefully the hard work pays off.