Baltimore's Finest: A Look Inside the Brand

A look inside the "Baltimore's Finest" clothing brand.

Share All sharing options for: Baltimore's Finest: A Look Inside the Brand

Before I get started, I just wanted to thank Greg York for having an interview with me about this brand. You all may not know what Baltimore's Finest is, but you surely will after you read this article.

Greg York is a 31 year-old artist that currently lives in the lower part of Delaware. He grew up in Brooklyn Park, MD, about 15 minutes away from Baltimore. He has lived in Baltimore almost his entire life, which is why he is so passionate about the city.

York's family were die-hard Baltimore Colts fans, but unfortunately, he was unable to ever see them play, since they left in 1984, when York was still a toddler. Thankfully, the city of Baltimore now has the 2-time World Champion Baltimore Ravens that he can root for every single day.

Greg York grew up wanting to do something that he loved and enjoyed as his career. He never was sure what it was that he wanted to do, but he knew it was something. A few years ago, York began to draw. He would grab pieces of black paper and draw things with a silver Sharpie. He called it Sports-Bar Art.

One day, a friend of York's came to him and said, "Man, that's stuff looks great, but people have seen all that before! You need to come up with your own thing. Something different. Your own design." All it took was one motivational line like that to jump start York into his new career.

York then created the Baltimore's Finest logo in no time. Once the logo was born, York sent it in to the U.S. Government Copyright Office to get the official ownership rights of the logo. It took about three months, but York finally received a letter back saying that he owned the image. This occurred in 2011, just two years ago.

Since that magnificent day in 2011, Greg has worked hard every day to promote his brand and show everyone that it is something worth wearing; that his logo is the face of the city. 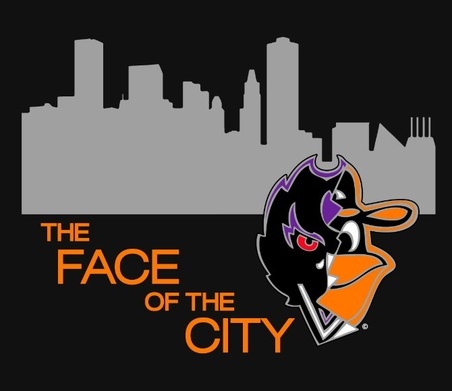 Greg York is passionate about Baltimore, the sports teams, and the people that live there. York wanted to create a clothing brand that represented all of those things, so that's exactly what he did.

The most impressive thing is who all has worn his brand so far. People that wear his brand include:

Those are just a few notable people. As far as I know, also, Adam Jones of the Orioles was wearing custom wrist bands made by Greg at the MLB Home Run Derby on Monday.

Here is a quote from Greg York about what he is doing:

"Sometimes I refer to myself as 'The People's Champ' because, in a way, I feel like I'm doing this for anyone that's never had a chance to chase their own ideas or dreams. I have a small window to do so. I'm not rich, I have limited resources, but I am a talented guy. I have heart. I have the hustle in me to find a way even when it looks like there isn't one. I want everyone to know that I'm going to take this brand as far as it can go and I need all the support I can get. Straight to the top! Who's coming with me?"

York created his brand before the O's made the playoffs, before the Ravens won Super Bowl XLVII, before all of the other Ravens-Orioles logo combinations; Baltimore's Finest is the ORIGINAL. Greg York didn't copy some guy down the street; he created this with his artistic skills and his motivation from friends. Greg York may not be very well known yet, but just you wait. Baltimore's Finest should be growing very soon.
Greg York wants his brand to be known all over Baltimore and further. He wants it to become larger than it is right now. The hustle and ambition that Greg has is what makes him such a talented, well-deserving guy.
Currently, Greg York is working on a few projects to promote his brand to the residents of Baltimore and beyond. He is working on creating a magazine for his brand. This magazine will be released in September, and it won't just feature his brand. It will also give local businesses and brands a chance to advertise in the magazine, so everyone can get a feel of multiple local places and things to buy. It is a great way to support small, not too well-known businesses. The magazine will be entitled "Baltimore's Finest: The Magazine."
Another project that Greg is working on is having a large event in the fall with the Baltimore Blast, but is not revealing that at this time. You will have to stay tuned for that announcement from him!
Overall, Greg York has worked very hard, and is finally coming up with results for the career that he has always dreamed of. Please support him and buy merchandise from him. Trust me, you won't regret it. It's called Baltimore's Finest for a reason.
IF YOU'RE INTERESTED...
Visit the Baltimore's Finest website to buy merchandise, look at photos, and learn about upcoming events. Find the website here.
LIKE Baltimore's Finest on Facebook: here.
Follow Greg York on Twitter: @BmoresFinest12
Follow Greg York on Instagram: @BaltimoresFinest