Super Bowl 2013: What would a Ravens win mean for Joe Flacco?

Joe Flacco is headed toward free agency, but will likely be negotiating a new deal with Baltimore. If he were to win on Sunday, how would that affect the public perception of his talents, and that contract?

Share All sharing options for: Super Bowl 2013: What would a Ravens win mean for Joe Flacco?

The Super Bowl has become the standard for defining quarterback play for many in the realm of sports commentary. To those analysts, the play of a QB is not defined by how many yards he produces or how many points he piles up, it is defined by how many championships he has won. Somehow the quarterback, above all, is supposed to be able to will his team to victories. To make his defense play better, to make his running backs get extra yards, and prevent his receivers from dropping passes. To them, its as if the quarterback has control of everything that is happening on the field.

Joe Flacco is now on the cusp of grabbing a Super Bowl victory. Something that great quarterbacks such as Dan Marino or Jim Kelly could never achieve. Something that John Elway couldn't grab until the twilight of his career. Flacco sits at the age of 28 with an opportunity to impress those who would otherwise point to his lack of championships as a failure overall.

Of course, Ravens fans know as well as anybody that even a mediocre quarterback can win a Super Bowl with the right people around him, as Trent Dilfer was at the helm in 2000.

The Ravens and Flacco will sit down soon and discuss a new contract. It would be a shock if Baltimore somehow let Flacco go to free agency, especially with the poor quarterback play that is rampant among about half of the league's teams. Flacco has been good enough to keep around, and he will be given a contract or a franchise tag.

But what sort of money should he be offered? Does Flacco get a bonus if the Ravens win the Super Bowl? If he gets a franchise tag, he will be paid as one of the top quarterbacks in the NFL. Does he become one of the top QBs when he grabs a Super Bowl title?

When comparing Flacco to the rest of the league, the conversation always starts with Atlanta's Matt Ryan. Both were drafted in the first round of 2008, with Ryan going much higher than Flacco. Ever since they both entered the league, their performances have been compared.

Some may jump to the conclusion that Flacco has now won the imaginary "battle" between the two quarterbacks, as his team has risen to the top of the league, while Ryan's group fell just short. There is a big problem with that line of thinking, and it all goes back to how well a player performs relative to his situation.

Football Outsiders measures quarterback play by a statistic called Defense-adjusted yards above replacement (DYAR). What DYAR does is assign a yardage value to a quarterback in relation to how well an average quarterback would play in their same situation. It takes into account the strength of the defenses that the QB has played, and what kind of supporting cast they have around them.

Here is a comparison of DYAR for both Ryan and Flacco since each has entered the league: 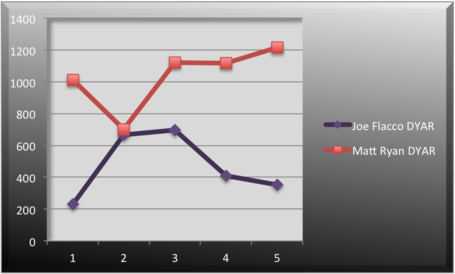 As is clearly displayed, Ryan has produced far more relative to his situation over the length of their five-year careers. It appeared that Flacco was making up ground in their second seasons, but he seemed to plateau in 2010 and has been declining ever since. Meanwhile, Ryan continues to improve.

The numbers do show that Flacco has been an above-average quarterback for his entire career, and that is a big deal for a team like the Ravens that often has one of the league's best defenses. Winning the Super Bowl will not suddenly make him one of the top quarterbacks in the league, but it will show that he has done enough to support a strong defensive squad.

However, when the Ravens are negotiating with Flacco after the season, they may want to keep those numbers above in mind. If he gets paid like one of the top five quarterbacks in the league, it may become tough for Baltimore to afford the type of talent to support him going forward. He does deserve to stick around as the starting quarterback, but the front office has to make sure it doesn't come with the cost of downgrading talent in other areas.