A look at the four games that featured AFC North teams on Sunday.

Week 14 was the first time in a while where all four AFC North teams played on Sunday against teams in other divisions. Three of the four games were very close. Let's take a look at them.

The Colts headed to Cincinnati to take on the Bengals, who are undefeated at home. Both teams are in control of their divisions, and they both wanted to get a step closer to clinching a division title.

The Bengals' defense would start the game forcing a quick three-and-out for the Colts, and it would be time for Andy Dalton to show his skills. Dalton would have two passes in the first possession longer than 15 yards; one would result in a touchdown. Cincy went up early, 7-0.

Later in the half, the Bengals decide to go for it on fourth-and-goal and score on a BenJarvus Green-Ellis 1-yard touchdown run. This puts the Bengals up, 14-0.

In the third quarter, Andy Dalton finds his favorite target, A.J. Green, for a 22-yard gain. Later in the drive, Green-Ellis scores his second touchdown of the game. The Bengals are leading, 21-0. By this time, it's beginning to look like a blowout.

Later in the third, Dalton passes to Jermaine Gresham for the 1-yard touchdown, giving the Bengals a 14-point lead once again.

In the fourth quarter, Andy Dalton practically puts this one away with a touchdown pass to A.J. Green, making it 35-14. The Colts would score two more times, but it wouldn't be enough, as Cincinnati went on to win it, 42-28.

The Dolphins came into the game against the Steelers to try and keep their record tied with the current sixth-seeded Baltimore Ravens. The Steelers, on the other hand, just want to stay "in the hunt" for the sixth-seed in the AFC.

In the third quarter, things began to get more interesting. A Daniel Thomas rushing touchdown on the first drive on the second half helped the Dolphins gain a comfortable 10-point lead on Pittsburgh, but it would be that way for long.

Four plays later, Roethlisberger hit Antonio Brown for a 43-yard touchdown, cutting the Dolphins' lead to just three points. On the ensuing Dolphins' possession, Ryan Tannehill would throw an interception on the second play of the drive, which would be taken to the end zone by veteran safety Troy Polamalu. Pittsburgh would have a 21-17 lead.

Later in the quarter, Tannehill would redeem himself by throwing a four-yard touchdown pass to Brian Hartline. Miami would be back up, 24-21.

On the first play of the fourth quarter, Roethlisberger would throw his third touchdown pass of the day to Jerricho Cotchery, making it a four-point Steelers' lead.

With three minutes remaining in the ballgame, Tannehill throws a short pass to Clay, the Steelers' defense forgets how to tackle, and Clay runs it in for the score. Dolphins up 31-28. They would also hit a field goal a few minutes later, giving them a 34-28 lead.

The last play of this game was the most interesting. The Steelers attempted to create the "Steel City Miracle" by lateraling the ball back to multiple players in black jerseys. The ball eventually gets lateraled to Antonio Brown, who runs it up the sideline and... into the end zone! The Steelers win on the last play of the game! What a miracle! ... But wait. After reviewing the play, it looks as if Brown stepped out of bounds before getting into the end zone. The play was dead.

The Browns-Patriots game really had no meaning to it, other than the fact that the Patriots would move a step closer to clinching the AFC East with a victory.

This one started off in a boring fashion. in the first half, two Cleveland field goals made up the 6-0 score.

In the third quarter, the Browns started off hot with a 40-yard touchdown pass from Jason Campbell to Gary Barnidge, making it a 12-0 Browns lead. (Missed two-point conversion.)

The Patriots would finally get on the board with a field goal in the third quarter, and a play later, Campbell throws an 80-yard touchdown to the great Josh Gordon, making it a comfortable 18-3 lead for Cleveland.

On the ensuing Pats possession, Tom Brady throws a 50-yard pass to Shane Vereen to set up a six-yard rushing touchdown by Vereen. The Patriots would get the two-point conversion, making them down 19-11.

After a Patriots field goal in the fourth quarter, Jason Campbell would throw another touchdown pass, this time to Jordan Cameron. The Browns would have a 26-14 lead with less than three minutes to play.

With 1:01 to play in this one, Brady throws a touchdown pass to Julian Edelman to make it a 26-21 Cleveland lead.

The Patriots would kick an onside kick, recover it, and there would be plenty of time left for Tom Brady. With 35 seconds left, Brady would throw an incomplete pass into the end zone, but a controversial pass interference call would give New England 1st-and-Goal at the one-yard line. On the next play, Brady would throw a touchdown to Danny Amendola, giving the Patriots a 27-26 win over the Cleveland Browns.

The snow would be coming down hard in Baltimore, as the Ravens would try and keep their playoff hopes alive with a win over the Vikings.

In the first quarter, the only thing worth mentioning would be a fumble by Toby Gerhart, recovered by Matt Elam. The fumble was controversial, as the replay showed that Gerhart's knee was down before the ball came loose. Nevertheless, the Ravens got the ball in Minnesota territory, and they took advantage of the turnover as Joe Flacco threw an easy touchdown pass to Ed Dickson, making it a 7-0 lead for Baltimore.

The rest of the first half would consist of sloppy play and a Vikings field goal. The Ravens had the lead at halftime, 7-3.

The third quarter wouldn't be interesting either, as the only points were another Vikings' field goal. Near the end of the third, Joe Flacco would be intercepted by Andrew Sendejo. The interception would lead to a Jerome Simpson receiving touchdown at the beginning of the fourth quarter. Minnesota would have their first lead of the day 12-7. (Two-point conversion missed.)

A huge pass interference call on the Vikings lead to a Dennis Pitta receiving touchdown on 4th-and-Goal with 2:05 left to play in the game. The Ravens now had the lead after the two-point conversion, 15-12.

On the second play of the ensuing Minnesota possession, Toby Gerhart would run 41 yards for a touchdown with 1:27 to go in the game, putting the Vikings back on top, 19-15.

On the very next kickoff after the touchdown, the Vikings pooch kick it to Jacoby Jones, who does what Jacoby does best... run it back for a 77-yard touchdown. This would put the Ravens back on top, 22-19, with 1:17 to play.

Three plays later, Matt Cassel throws a very short pass to Cordarrelle Patterson, who runs it 79 yards for the touchdown with 45 seconds to play. That means the Vikings won it, right? They have a 26-22 lead with 45 seconds left, it's easily over.

BUT WAIT.. as if there weren't enough touchdowns in the last 2:05 of this game, Joe Flacco leads the Ravens down the field, and throws the game-winning touchdown pass to rookie wide receiver Marlon Brown.

The Ravens would win a THRILLER, 29-26, to help them stay in control of their own destiny.

There were five combined touchdowns in the last 2:05 of the game, an NFL record.

Cincinnati Bengals: No notable injuries were suffered in Week 14 win over the Colts.

Baltimore Ravens: No notable injuries were suffered in Week 14 win over the Vikings.

Pittsburgh Steelers: No notable injuries were suffered in Week 14 loss to the Dolphins.

Cleveland Browns: No notable injuries suffered in Week 14 loss to the Patriots.

There were no changes in the AFC North standings after Sunday. The order is the same. 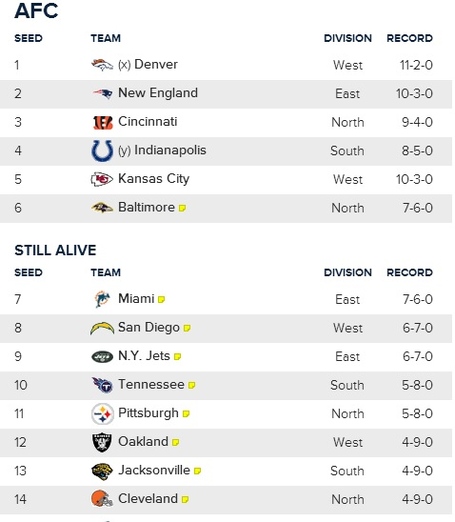 Not much has changed in the AFC Playoff Picture since last week. The Broncos have clinched a playoff berth, while the Colts have clinched the AFC South.

The only eliminated team is the Houston Texans. (2-11)