Adrian Peterson took to Twitter to talk about the Ravens fan base and the officials after the loss on Sunday.

Share All sharing options for: Adrian Peterson: 'Worst fan base I've ever experienced'

The Ravens defeated the Minnesota vikings in a thriller game on Sunday, 29-26. (Read the Baltimore Beatdown recap here) and there are a few people that aren't happy about it. One of them being Vikings' running back Adrian Peterson.

Peterson took to Twitter after the game to speak his mind about the officials and the Ravens' fan base: 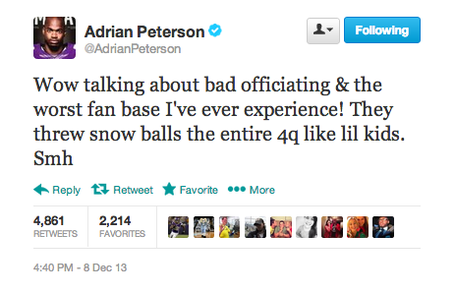 Peterson disrespects the fan base by calling them "lil kids" for throwing snowballs onto the field during the fourth quarter. He also says there was "bad officiating."

The bad officiating part is understandable, especially since there were many calls that didn't go the Vikings' way, including a questionable fumble call in the first quarter that led to the only touchdown of the first three quarters.

It's possible that Peterson could be fined after the tweet, since he spoke about the officials. It has happened many times in the NBA in the past few years, and it could easily happen to the former MVP.

Peterson left the game in the second quarter with an ankle injury and did not return.