A look back at the two games that featured AFC North teams in Week 17.

Since the NFL regular season is officially over, it seems that this will be the last AFC North Report until next year. There were two AFC North divisional matchups on Sunday, let's take a look at them.

A lot of things had to go Pittsburgh's way on Sunday if they wanted to make it into the postseason. Of course, none of it mattered if they couldn't get a win against the Browns.

The game wouldn't start well for Cleveland, as Pittsburgh and Ben Roethlisberger easily drive down the field to score on a nine-yard Jerricho Cotchery touchdown reception.

In the second quarter, Le'veon Bell was spinning, rushing, and catching passes all the way to the end zone, making it a Steelers lead, 14-0 early on.

The rest of the game wouldn't be much more interesting. The Steelers would hit two field goals, while the Browns got their first and only points near the end of the fourth quarter on a 35-yard touchdown reception by Foswhitt Whittaker.

The Cincinnati Bengals clinched the AFC North title last week, meaning all they had to play for was a potential first-round bye. As for the Ravens, they were playing with the hopes of making the sixth seed in the AFC, attempting to make another run at a Super Bowl title.

The game started out in Baltimore's favor. On the first play of the game, Corey Graham intercepted quarterback Andy Dalton, giving the Ravens excellent field position early. Unfortunately, the offense was unable to capitalize, as they were forced to settle for a field goal.

On the next Bengals possession, Andy Dalton throws a pass way over his receivers hands, which lands right into the arms of Ravens' safety James Ihedigbo, who returns it inside the Bengals' 40-yard line. Once again, Baltimore would settle for another field goal. The score was 6-0 early on.

The Bengals then discovered that A.J. Green could go deep. Dalton launches a pass to Green, nobody is within ten yards of him, and he walks in for the easy 53-yard score. Bengals led 7-6.

In the second quarter, it was all Cincinnati. They scored a field goal, and with less than two minutes left, Marvin Jones catches Dalton's second touchdown pass of the day. It would be a 17-6 Bengals lead at halftime.

The third quarter would be much better for Ravens fans. Justin Tucker hits a field goal to make the score 17-9, and then Joe Flacco finds Marlon Brown in the back of the end zone for an amazing touchdown catch. Then the Ravens go for two, Ray Rice runs it, and he gets it! The score would be tied at 17-all. Unfortunately for Baltimore, those would be their final points oft he 2013 season.

The fourth quarter would include an Andy Dalton touchdown run, a Dre Kirkpatrick pick-six, and a win for the Cincinnati Bengals, 34-17.

Baltimore Ravens: Season is officially over.

Pittsburgh Steelers: Season is officially over.

Cleveland Browns: Season is officially over.

Cincinnati Bengals: No notable injuries were suffered in Week 17 win over Ravens.

Baltimore Ravens: No notable injuries were suffered in Week 17 loss to Bengals.

Pittsburgh Steelers: WR Jerricho Cotchery injured his shoulder. He did not return.

Cleveland Browns: No notable injuries were suffered in Week 17 loss to Steelers. 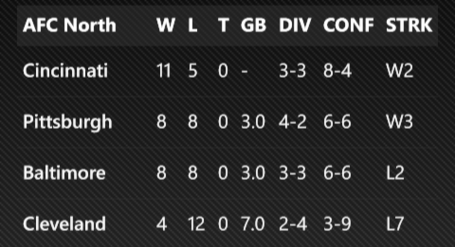 These are the final AFC North standings for the 2013 season. 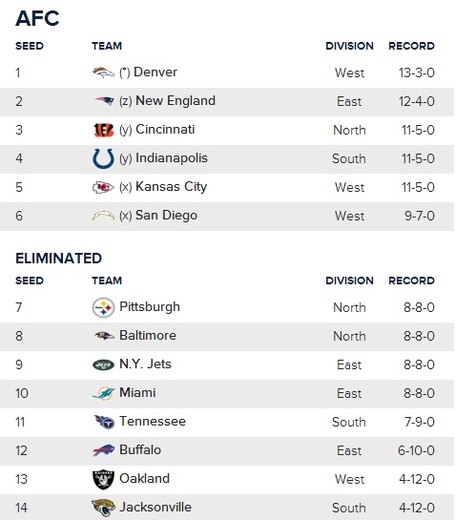 The Cincinnati Bengals are the only AFC North team to make the 2013 NFL Playoffs.

The Baltimore Ravens were eliminated due to a loss and a Steelers win in Week 17.

The Pittsburgh Steelers were eliminated due to a Chargers win in Week 17.