I wrote a book. Crazy, huh?

Share All sharing options for: A special offer for the book 100 Things Ravens Fans Should Know & Do Before They Die 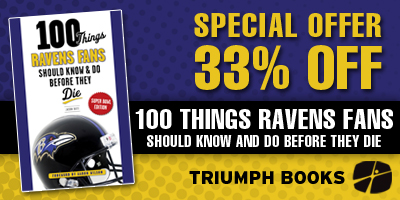 Most Ravens fans have watched a game at M&T Bank Stadium in Charm City, joined in the Ravens-Steelers rivalry and mourned the loss of team owner Art Modell, but only real fans attended training camp in Westminster before it was moved to the Owings Mills facility, know what Terrell Suggs was gifted by the local media after winning the Good Guy Award and have run in the Fiesta to 5K event hosted by the Brigance Brigade to raise awareness for ALS.

Whether you're a die-hard fan of franchise legends Ray Lewis and Jonathan Ogden or a newer supporter of Joe Flacco and Ray Rice, 100 Things Ravens Fans Should Know & Do Before They Die offers a chance to learn the most important facts and figures about the team, the traditions and what being a Ravens fan is all about.

And since you're a valued member of the Baltimore Beatdown community, we're pleased to offer you a 33% discount on the book.

Just click on the picture below to visit the Triumph Books page. Once you arrive to the checkout page, add a promotion code and type the word "beatdown." That will give you the discount. 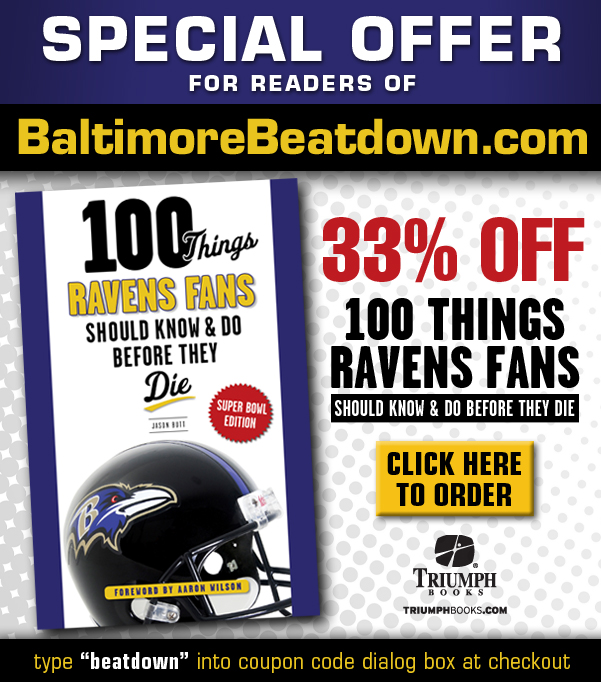