A look at the four games that featured AFC North teams in Week 16.

The AFC North race was heating up to begin Week 16, but ended around 7:30 p.m. EST on Sunday. Let's take a look at the four games that featured teams in the AFC North.

The Cincinnati Bengals knew that they could come one step closer to clinching the division with a win over the Minnesota Vikings in Week 16.

On the Vikings opening possession, Matt Cassel would fumble, it would be recovered by Carlos Dunlap of the Bengals, who returns it down to the four-yard line. The turnover would lead to a BenJarvus Geen-Ellis touchdown for Cincinnati, who led 7-0 early.

Later in the first quarter, Andy Dalton would find A.J. Green for the 29-yard score. The Bengals led 14-7 at the end of the first.

In the second quarter, a Vincent Rey interception return for a touchdown would basically lock the game up for Cincinnati, who gained a large lead and never gave it back.

The Bengals would go on to win the game, 42-14, in a game that would end up clinching the division for Cincinnati.

This was a game where neither team really had much to play for, as both had already been eliminated from playoff contention. Surprisingly, the Jets are only one game back from the Miami Dolphins, who own the sixth seed, but it is impossible to jump them due to tiebreakers.

Jets' Head Coach Rex Ryan has basically been told that he would be fired after the season ended, so this game would most likely be his last time coaching the Jets at MetLife Stadium.

The first quarter wouldn't consist of much, except for a Cleveland Browns' field goal. The Browns would lead 3-0 at the end of the first.

In the second quarter, the Browns would be deep in the red zone, and be unable to convert on four different occasions, which turned the ball over on downs. Later in the quarter, Cleveland would drive all the way to the Jets' 5-yard line, where Edwin Baker would run it in for a touchdown.  The score was 10-0.

On the ensuing Jets' possession, Chris Ivory would run 21-yards for a nice gain, which would lead to a six-yard touchdown pass to David Nelson to make the score 10-7.

On the next Jets possession, they would end up with a field goal, tying the score at 10-10 at halftime.

Early in the fourth, Geno Smith would throw another touchdown pass to David Nelson, making it a 17-10 game. The Browns would score another field goal to make it a four-point game.

On the next Jets' possession, Geno Smith utilizes his running ability to score a 17-yard touchdown run. The Jets would be up, 24-13.

With the Browns' backs against the wall, future Hall-of-Famer Ed Reed came up with a clutch interception to seal the 24-13 victory for the New York Jets.

This was a huge game for Baltimore, who would gain a game on the Dolphins in the Wild Card race, as well as stay alive in the AFC North race with a win.

It started out great for New England, who scored easily on their first drive on a LeGarrette Blount touchdown run. The score was 7-0.

On the next Ravens' drive, Joe Flacco is picked off by Logan Ryan, which would lead to a four-yard touchdown pass to Shane Vereen. The Patriots led 14-0.

In the second quarter, the Patriots' only scored a field goal, making it 17-0 at halftime.

In the third quarter, the only points scored would be another New England field goal, to make it 20-0 at the end of the third.

The fourth quarter didn't start out too bad for the Ravens, as Joe Flacco successfully ran a QB Sneak to score the first points of the day for Baltimore. The Ravens would only be down 20-7, a very possible thing to comeback from. Of course, it's hard to come back when the Patriots' offense slaughters your defense on a drive that ended up in another LeGarrette Blount touchdown.

The Ravens' didn't have much time left, so they decided to just throw in backup quarterback Tyrod Taylor, a decision that would end up in two defensive touchdowns for New England.

The Patriots routed the Ravens, 41-7, in a game that clinched the AFC North for the Bengals.

This game was one that had possible playoff implications for both teams, as they are both attempting to improbably make the playoffs.

With the score tied at seven-a-piece, Eddie Lacy and the Packers took the lead back with a 14-yard touchdown run. Green Bay had the lead 14-7. The Steelers would score a field goal, as the score was 14-10 at halftime.

In the third quarter, the Steelers would take their first lead of the game with a 13-yard Ben Roethlisberger touchdown run, making the score 17-14.

On the Packers' second drive of the game, a controversial call (or just a bad call by the officials) occurs. A field goal attempt by Green Bay is blocked, picked up by Ryan Clark, and ends up being fumbled and illegally being batted out of bounds by a Ziggy Hood. According to the referees, Clark never had possession of the ball, meaning that instead of it being Pittsburgh's ball with the penalty enforced, it was now the Packers' ball with first-and-goal at the two-yard line.

On the next play, Eddie Lacy would run it in for the touchdown, giving the Packers another lead, 21-17.

On the next Steelers' possession, Roethlisberger leads Pittsburgh down the field, and caps off the drive with an 11-yard touchdown pass to Matt Spaeth. The Steelers regained the lead, 24-21.

Then, Matt Flynn would attempt to take back the lead from Pittsburgh, but instead he would dig the Packers in a deeper hole. Flynn would throw a bad pass, and it would be picked off by Cortez Allen, who takes it 40 yards to the house. The Steelers had a 31-21 lead at the end of the third quarter.

In the fourth, Green Bay would score a field goal to make it 31-24. On the ensuing Packers possession, a Flynn pass to Jordy Nelson would give them a 31-yard gain, which would eventually set up John Kuhn for the one-yard touchdown run. The game would be tied, 31-31.

The Packers would have the ball with a little less than two minutes left, attempting to drive down the field and win the game. On third-and-eight, Matt Flynn runs the ball and fumbles, and just like that, the Steelers have a perfect setup to win the game.

Le'Veon Bell would run it in for the touchdown to give Pittsburgh a 38-31 lead with a little over a minute to play. Could the Packers come back with no timeouts? It's possible.

On the ensuing kickoff, Micah Hyde returns the kick 70 yards to the Pittsburgh 31-yard line, and the Packers seem to have a chance. Unfortunately for them, bad time management and untimely penalties would give the Steelers the win, 38-31. 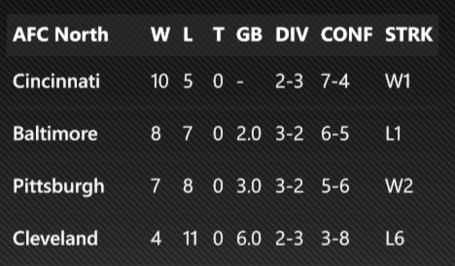 The Cincinnati Bengals have clinched the AFC North after they defeated the Vikings and the Ravens lost to the Patriots on Sunday. 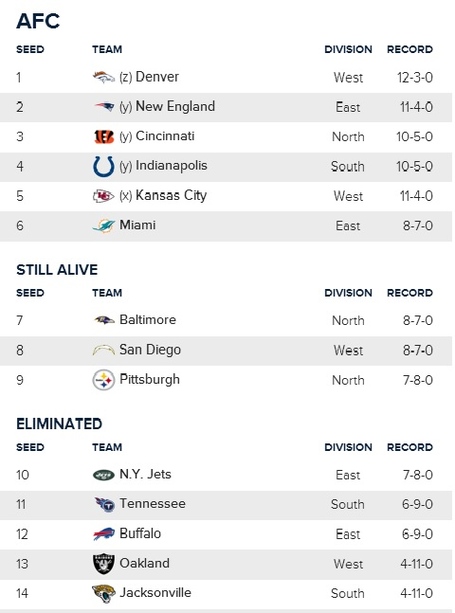 Five of the six playoff teams have been decided in the AFC. The Broncos, Bengals, Patriots, Colts, and Chiefs are all locked into a playoff berth. The seeding is the only thing that could change in Week 17.

As for the sixth seed, it is still up for grabs, with the Ravens, Dolphins, Chargers, and Steelers all fighting for it. To see scenarios for all four teams in Week 17, click here.

All other teams in the AFC: Eliminated from playoff contention.