A look at the two games that featured AFC North teams on Sunday.

The AFC North divisional race could possibly become very, very close on Sunday, but did it?

The Jacksonville Jaguars came into Cleveland on Sunday to attempt to win three of their last four games after starting 0-8. The Browns, on the other hand, wanted to hop back into the AFC Wild Card race with a win.

The Browns started the game looking well, especially after Brandon Weeden threw a nice 42-yard pass to Josh Gordon. After that play, Willis McGahee ran it in for a touchdown, giving the Browns a 7-0 lead.

Jacksonville would score a touchdown a few minutes later, tying the score at seven-all.

The trend of Weeden to Gordon would continue throughout the day, but in the second quarter, one of the best plays occurred between the two. Weeden hit Gordon for a 21-yard touchdown, giving the Browns a 14-7 lead.

After the touchdown to Gordon, Weeden would go on a bit of a cold streak, which started on a pass that was intercepted by Johnathan Cyprien. A few plays later, Maurice Jones-Drew threw a pass to Mercedes Lewis for a touchdown, making him the first non-quarterback to throw a touchdown pass in Jaguars' history.

On the next Browns possession, Brandon Weeden would throw another interception, which would lead to a field goal for the Jaguars.

Then, just as you thought the madness was over, Brandon Weeden fumbles with five seconds to go in the half, Jacksonville recovers, and they kick a field goal before the half. The Jaguars had a 20-14 lead at halftime.

After the break, Weeden threw a 4-yard touchdown to Greg Little, putting the Browns ahead by one.

In the fourth quarter, a snap to Brandon Weeden goes flying over his head and lands in the end zone. The Browns' quarterback then kicks the ball out of the back of the end zone, giving the Jaguars a 22-21 lead with a little over seven minutes remaining in the game.

The Jaguars would kick a field goal, and they led 25-21 with four minutes left in the game. Brandon Weeden then finds Josh Gordon for the 95-yard touchdown to put the Browns up, 28-21. The touchdown reception would put Gordon over 200 yards for the game, making him the first player in NFL history to have at least 200 yards receiving in back-to-back games.

Chad Henne would then throw the game-winning touchdown pass to Cecil Shorts III with 40 seconds remaining in the game, making the final score 32-28. Jaguars win.

This game would lack excitement and energy almost all the way through.

The first quarter of this one would be scoreless, but the Bengals would come out quick in the beginning of the second quarter and score on a BenJarvus Green-Ellis touchdown run.

A couple minutes later, Phillip Rivers would find tight end Ladarius Green for the 30-yard touchdown, tying the score at 7-7.

In the third quarter, Dre Kirkpatrick of the Bengals would be the only one to pick Phillip Rivers off all day. The turnover would lead to a 21-yard touchdown pass to A.J. Green, putting the Bengals up by seven.

The rest of the game would include a field goal for each team, nothing too exciting. The Bengals would win it, 17-10.

Cincinnati Bengals: No notable injuries in Week 13 win over the San Diego Chargers.

Cleveland Browns: No notable injuries in Week 13 loss to the Jacksonville Jaguars. 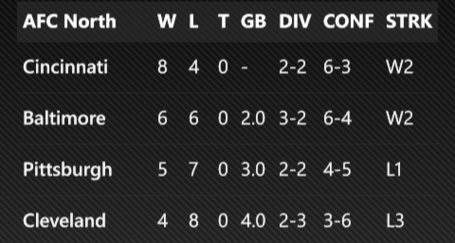 The Cincinnati Bengals continue to be two games ahead of the Baltimore Ravens for first place after the win on Sunday over the Chargers. The Browns, on the other hand, will stay in last place, a place they are very familiar with. 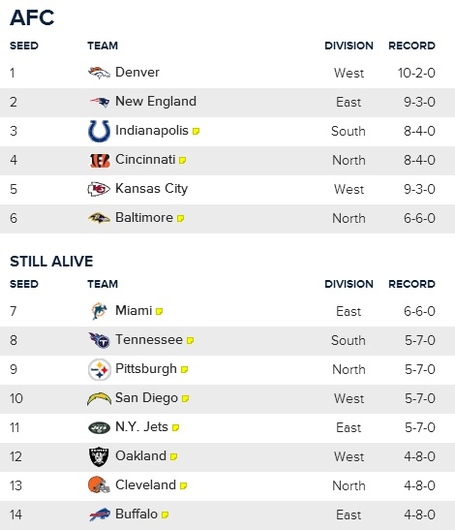 The Cincinnati Bengals remain atop the AFC North, meaning they remain in the fourth seed in the AFC. The Baltimore Ravens continue to have the sixth seed, after the win on Thursday over the Pittsburgh Steelers.

There are currently six main teams fighting for the final Wild Card spot in the AFC (Ravens, Dolphins, Titans, Steelers, Jets, and Chargers.) The Browns are close to being mathematically eliminated from playoff contention, but for now, they still remain in the hunt for the Wild Card spot with a record of 4-8.