A look at the three games that featured AFC North teams in Week 15.

Week 15 was a huge week for the AFC North, and we're going to take a look at how much the division has changed after just one week. It is also very possible that the second place team has more control than the first. Here is a look at the three games that featured AFC North teams in Week 15:

The Chicago Bears came into this game looking to stay in the NFC North divisional race, while the Browns just wanted to try and win their last three games, since they are already mathematically eliminated from the playoffs.

The game started out well for Bears' quarterback Jay Cutler, who led Chicago into the red zone on the first drive. Then, Cutler made a huge mistake, throwing an interception in the end zone. That turnover would lead to a field goal by Billy Cundiff, which were the only points at the end of the first quarter.

In the second quarter, the Bears would score a field goal, tying the game at three-a-piece. Later in the quarter, it would be another meltdown for Jay Cutler. On the second play of a Bears' drive, Cutler would be intercepted by Tashaun Gipson for the second time, who would take it to the house. The Browns would lead 10-3.

With under two minutes to play, Cutler would throw a bomb to Brandon Marshall, who caught the 41-yard pass. Two plays later, a 5-yard pass to Marshall would be caught for a touchdown. The score would be tied at halftime, 10-10.

On the third play of the first drive of the third quarter, the second defensive touchdown of the game is scored, but this time it is Chicago scoring it. Jason Campbell throws it right to Zack Bowman, who returns it 43-yards to the end zone. The Bears would take a 17-10 lead.

On the very next Browns' drive, Jason Campbell would lead his team down the field, and Edwin Baker capped off the drive with a two-yard rushing score. Game would be tied, 17-17.

On the very next Chicago drive, a third defensive touchdown would be scored. Tight end Martellus Bennett fumbled the ball, and Browns' safety T.J. Ward would take it to the house for a 51-yard touchdown. The Browns then led 24-17.

In the fourth quarter, an amazing catch by Bears' wideout Alshon Jeffery tied the score at 24-all. The next Chicago drive would also end well for them, as Earl Bennett caught a 4-yard touchdown from Cutler. The Bears' would take the lead, 31-24.

The next Bears' possession would end in seven points, also, as Michael Bush ran 40-yards for the third touchdown of the quarter for Chicago. They would have a comfortable 38-24 lead.

The Browns' would score once more, but it would not be enough as they fall to the Bears, 38-31.

The Bengals-Steelers Sunday Night Football game was one of the games that meant the most for the AFC North in Week 15. It had a huge impact.

In the first half it was ALL Pittsburgh. On the first Bengals possession, punter Kevin Huber was tackled just outside of the end zone, which means the Steelers get the ball on the Bengals' one-yard line. Le'Veon Bell would quickly run it in for seven points, as the black-and-yellow team led 7-0 early on.

The next Steelers' drive would end on a 12-yard pass to Antonio Brown, giving Pittsburgh a 14-0 lead.

Four minutes of game time later, it got a lot worse for the Bengals. Kevin Huber punted it to Antonio Brown, who ran it 67-yards for the touchdown. In the middle of the play, Huber was blocked hard by Terence Garvin (illegal block) and fractured his jaw. This means that kicker Mike Nugent had to punt the ball, as well as kick it.

With the Steelers up 21-0 at the end of the first, the second quarter would be nearly as fun for Pittsburgh, but it wouldn't be bad.

With a little over nine minutes left in the half, Brandon Tate returned a kick 52 yards to the Pittsburgh 47, which would ultimately lead to the first Cincinnati points of the night. A Giovani Bernard one-yard rush gave them their first touchdown. At halftime, the Steelers led, 27-7.

The third quarter would consist of one Steelers' field goal, their last points of the game. Pittsburgh led 30-7 at the end of three.

The Bengals would start off the fourth quarter with two touchdown drives, but a missed two-point conversion on the second touchdown would keep the Steelers in a comfortable situation, as they led 30-20, which would end up being the final score.

The Steelers did a huge favor for Baltimore by winning this one. If Cincinnati had won, they would have basically clinched the AFC North.

Detroit came out strong on the first drive, as Matthew Stafford and Reggie Bush helped lead the Lions down the field. It would eventually be a 14-yard touchdown by Bush. Detroit led 7-0 early.

The two teams would battle back-and-forth in the first quarter, but nobody else would score. The second quarter would come along; with the Lions still leading, 7-0.

With around nine minutes to play, Stafford was picked off by linebacker Daryl Smith. The turnover would lead to the fifth field goal of the night (53 yards) by Justin Tucker. The Ravens led 15-10.

On the ensuing Lions' possession, Calvin Johnson came alive and began torching the Ravens' secondary, to a degree, as Detroit went down and scored their second touchdown of the night on a Joseph Fauria touchdown reception. The Lions would go for two, but Megatron couldn't make the catch, which made it only a one-point Lions lead, 16-15.

The Ravens had one timeout and 2:21 to play to drive down the field and get at least a field goal, which would give them the lead. Joe Flacco made a terrific 27-yard pass to Jacoby Jones to put them in Lions' territory. A few plays later, Ray Rice ran up the middle, getting only two yards. It would be fourth down.

Initially, Joe Flacco and the offense looked as if they were going to go for it, but at the last second, John Harbaugh took a time out. He sent Justin Tucker and the field goal unit out onto the field to attempt a 61-yard field goal for the lead. Tucker took his time and kicked it wide right... or so everyone thought. The kick barely made it in the corner bottom-right corner of the uprights, and Tucker had officially made the longest field goal in Ravens' franchise history.

Of course, there was still 38 seconds to play and the Lions had three timeouts. If you saw what Detroit did to Dallas with a small amount of time remaining, you'd know that the Ravens didn't have this one locked up.

The first play of the drive was a Stafford pass, intended for Nate Burleson, and was picked off by Matt Elam, the Ravens' safety who called Calvin Johnson an "old man" earlier in the week.

Detroit elected not to use their timeouts to stop the Ravens after a Ray Rice first down, giving Baltimore a crazy victory, 18-16.

Cincinnati Bengals: Punter Kevin Huber has been placed on IR after he fractured his jaw in loss to Steelers. CB Dre Kirkpatrick and LB James Harrison also left the game with injuries.

Pittsburgh Steelers: Linebacker Lamarr Woodley will miss the rest of the season after injuring his calf in win over Bengals.

Cleveland Browns: No notable injuries were suffered in Week 15 loss to the Bears. 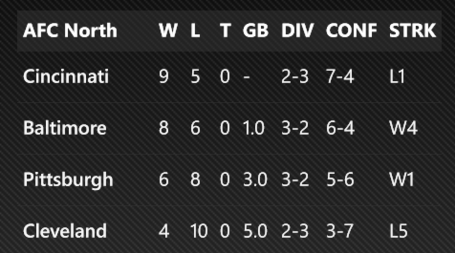 The AFC North standings haven't changed since last week, but overall, the division is now completely different. Since the Bengals lost to the Steelers in Week 15 and the Ravens won, Baltimore now controls its own destiny in the division.

If the Ravens win out (Patriots, Bengals) they would then win the division, and possibly get a two-seed in the AFC. Week 15 was huge in the shifting of power in the AFC North. 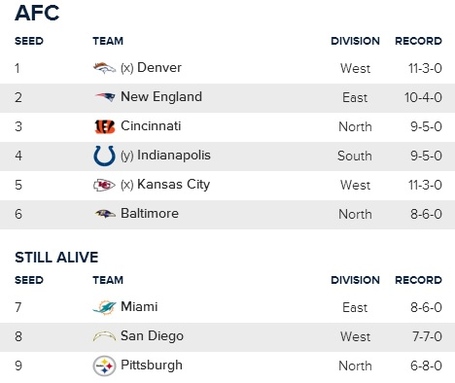 The Denver Broncos and Kansas City Chiefs have clinched playoff berths, while the Indianapolis Colts have already won the AFC South.

As for the Wild Card, the Ravens currently hold the sixth seed, while the Dolphins, Chargers, and Steelers are all right on their tail.

The following teams have been mathematically eliminated from the playoffs: