Does Ravens left tackle Bryant McKinnie want out of Baltimore?

An alleged screenshot leaked on twitter shows that Bryant McKinnie may want out of Baltimore.

Share All sharing options for: Does Ravens left tackle Bryant McKinnie want out of Baltimore?

Baltimore Ravens fans have erupted all over Twitter after a possible screenshot showing Ravens' left tackle Bryant McKinnie was leaked indicating he wants out of Baltimore.

The screenshot in question, which has not been verified, shows McKinnie direct messaging a Miami Dolphins fan page on Twitter, stating that he "wants to come back" to Miami. McKinnie was a member of the Miami Hurricanes for his junior and senior years in college, playing left tackle both seasons. 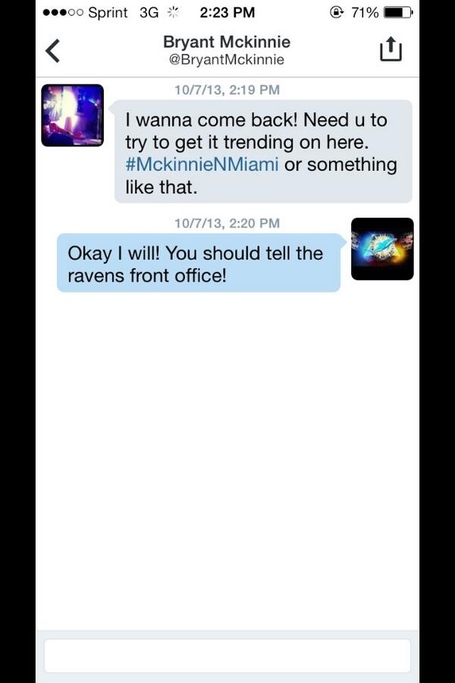 The text from McKinnie reads, "I wanna come back! Need u to get it trending on here. #McKinnieNMiami or something like that." The Dolphins fan page then tells McKinnie he needs to tell the front office about how he feels.

The motive for McKinnie and the direct message is currently unknown, and the receiver of the message has requested that his identity be kept a secret. Could it be a hoax? Perhaps. Then again, it's McKinnie. Anything is possible.

If this is in fact coming from McKinnie, he would seem to know he's lost his starting spot to new left tackle Eugene Monroe, which is why he may have decided to send the message.

This season, McKinnie has been unable to protect Joe Flacco, and he is a large reason why the offensive line has been struggling in the first five games of the season. Acquiring Monroe happened due to the lack of production by McKinnie.

Earlier Monday, Baltimore Beatdown manager Jason Butt wrote whether there could be a possible trade to Jacksonville due to Luke Joeckel's season-ending injury.

Keep an eye on Baltimore Beatdown for possible updates about McKinnie and the possibility of the Ravens cutting or even trading the eleven-year veteran.