A roundup of the games between the Bengals, Steelers, and Browns.

The Ravens had a bye this week, which meant most Ravens fans got a little look at the AFC North games. Here is a small roundup of each game, and what it means for Baltimore.

The Cleveland Browns traveled to Kansas City to take on the undefeated Chiefs.

The Chiefs came out looking fabulous as they jumped out to a 20-10 lead at halftime.

After the half, it seemed to be the Browns that wanted to win more. The Chiefs only scored three points in the entire second half, while the Browns scored seven, but it was not enough to complete the comeback as Cleveland fell to Kansas City, 23-17.

The Browns loss would be blamed mainly on WR Davone Bess, who had three drops in the contest, including a dropped punt in the fourth quarter that led to a Chiefs recovery.

The Chiefs remain undefeated while the Browns move to 3-5 and stay in third place in the AFC North.

The Cincinnati Bengals were at home against the New York Jets, looking to gain one more game on the second-place Baltimore Ravens.

The game was all Cincinnati, as they had a 28-6 lead at halftime and were sitting pretty. The rest of the game went worse for the Jets, only scoring three points in the second half.

The star of the game was not Andy Dalton, nor was it Pro-Bowl receiver A.J. Green. It happened to be two-year veteran wide receiver Marvin Jones. He had eight receptions for 122 yards and four touchdowns, a stellar performance.

This week helps keep the Bengals in first in the AFC North, as they are the only team in the division with a positive record.

At this point, it looks like they're the team to beat in the AFC North, not the defending Super Bowl Champions.

The Pittsburgh Steelers traveled to Oakland to take on a team with the same number of wins as them. The difference was, the Steelers had won two games in a row, including one against the division rival Baltimore Ravens last week.

Oakland could not be stopped in the first half, but the Steelers sure could be. The halftime score was a shocking 21-3, and it seemed as if the Raiders had this one with ease.

Apparently the Raiders were too comfortable, and the Steelers didn't enjoy it. Pittsburgh made a fourth quarter comeback that included two touchdowns and a two-point conversion, but it was not enough as they fell to the Raiders, 21-18.

Shaun Suisham attempted an onside kick after the Steelers' second touchdown, but it fell right into the hands of a Raiders player. Suisham also missed two field goals in the game, which mathematically would have given them a three-point lead after their second touchdown.

The Steelers fall to 2-5, as they remain in last place in the AFC North, somewhere they didn't think they'd be at all this season.

Cincinnati Bengals: Linebacker Rey Maualuga left game with both a concussion and a knee injury. He was unable to return.

Pittsburgh Steelers: Three injuries on the offensive line occurred: Guard Ramon Foster left with possible concussion and was unable to return. Guard David DeCastro left with an ankle injury and did not return. Guard Guy Whimper left the game with a knee injury.

Cleveland Browns: Return man Travis Benjamin left the game with a knee injury in the second half. He did not return. Multiple reports are saying that his injury could be season-threatening. No sure diagnosis yet. 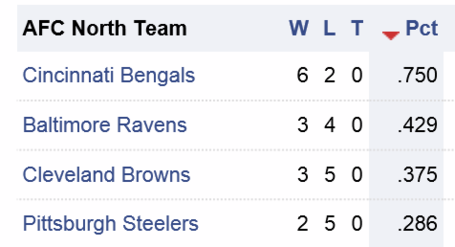