There are so many memorable moments in the NFL career of Ray Lewis, but perhaps one stands out above the others as my favorite.

Share All sharing options for: My Favorite Ray Lewis Memory

From the lows of seeing Baltimore Ravens linebacker Ray Lewis shackled in a bright orange prison-issued jumpsuit, to hoisting the Lombardi Trophy as the MVP of Super Bowl XXXV, the 17-year veteran has created so many memories for his legions of fans. Everyone should have more than a few but there has to be one that each of us recalls as their one favorite.

Some will state the obvious related to the team's Super Bowl victory, while others will point to a specific play on the field, be it his game-saving tackle against Darren Sproles of the San Diego Chargers or the interception return for a TD on a pass taken out of the hands of Tennessee Titans RB Eddie George. Others may recall one of his many memorable jacked-up crushing hits over the years.

However, my favorite memory came in what will now be Ray's 17th year with the team and didn't even happen on the playing field. As a credentialed member of the media at the team's summer Training Camps, I had the privilege of being able to watch practices and listen to the players speak at the podium after practice, as well as greet fans and sign autographs.

Most of the fans that got pictures and autographs were the kids, but there were occasions that the Ravens, who were huge supporters of the military, brought group of veterans, and specifically injured or disabled vets to practices. One afternoon this summer, as the players came off the field, head coach John Harbaugh stepped up to the podium to answer the media's questions for the day. 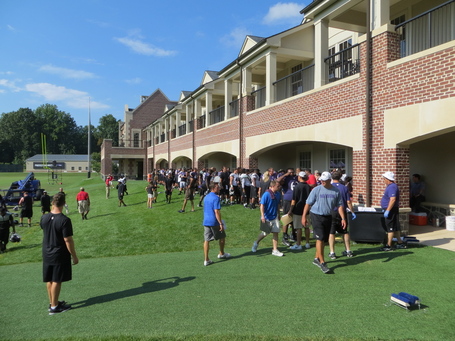 Meanwhile, a bunch of the players met, signed autographs and took pictures with the military vets on hand. While virtually everyone else was listening and watching Harbaugh, I turned and noticed a younger veteran amputee struggle to stand up out of his wheelchair to have his photo snapped with the legendary linebacker. 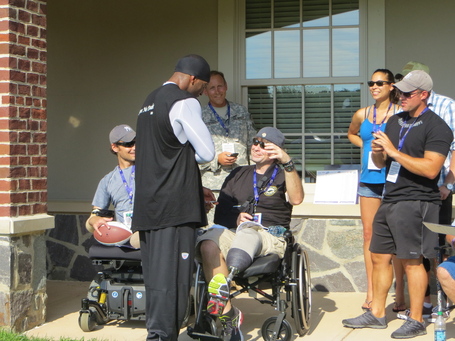 That alone would make a great memory, especially for the injured veteran, but that was not the highlight that made this obscure incident #1 with me. Upon standing, the young man asked Ray if he would hold the veteran's prosthetic leg. He handed it to Ray before he could answer, prompting Ray to say, "This is the first time I've ever taken a picture with another person's leg."

I had moved closer as the scene unfolded and quickly snapped this photo as the man's friend took his picture. No other explanation is needed. 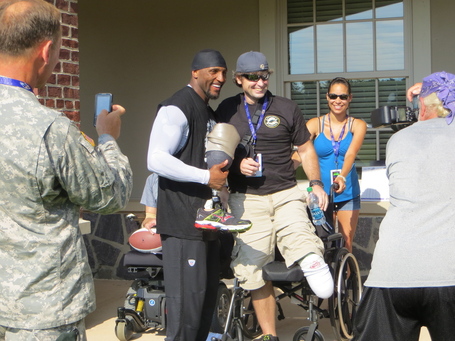 Now you know the rest of the story,and why this is my favorite Ray Lewis memory. What's yours?