The Good, The Bad and The Ugly, Off and Running!

Share All sharing options for: The Good, The Bad and The Ugly, Off and Running! 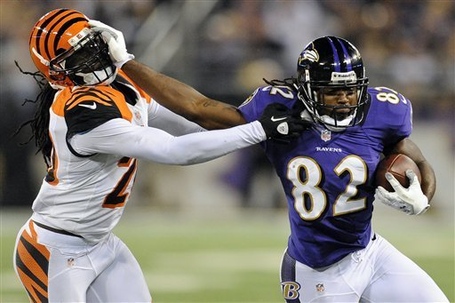 It’s like déjà vu all over again. Ravens have a so-so preseason and then blast a divisional opponent opening weekend.

I stand corrected. About a great many things. Really thought Cincy would have put up more of a fight. Really, really thought we were going to miss Suggs. Completely wrong on both accounts. First 36 minutes went about as I expected. And then Joe (and the "aging" defense) stepped up and said, "Okay boys, I’ll take it from here".

Joe isn’t elite. He’s inconsistent. Winning is not directly attributable to the quarterback as Joe has all-galaxy Ray Rice and an All-Pro defense. Joe just made three of the most amazing throws you will ever see. First play out of the chute a bomb to Torrey. Later, he hits Boldin perfectly for a touchdown as Boldin has a guy all up in his kitchen (still not sure if Boldin "truly" caught it, but like Mark Teixeira, it don’t matter now). And Joe threw it off his back foot. I don’t know if there is an active NFL quarterback today that can make that throw off of his back foot. The third throw, with two blitzers in his face, Joe drops a rainbow into the bucket for Pitta’s TD. And honorable mention has to go the near perfect back shoulder completion to Jacoby. But Joe is still just a middling NFL quarterback… All you zombies just keep hatin’… Unfrickin’ believable…

Ray Rice. Instant rice, I mean instant offense; just add water, I mean just add a football. He had "only" ten carries, but for 68 yards. Plus another 25 yards receiving. Oh, and did I forget TWO rushing touchdowns? I'll take 90 and 2 every game from Rice all the way through the Super Bowl.

Hats off to the O-line. Yes Flacco was hit a little more than any of us would’ve like to have seen, but I think given the hand the Ravens have been dealt this season, probably par for the course. For the most part, Joe had time to make the correct decision, and there were nice rushing lanes on most running plays. Have to admit, our re-shuffled and continually shuffling O-Line performed better than I expected.

Vonte Leach. Just wants to meet people. Up close and personal. And then run them over… Guy is a monster. And he is *our* monster.

The receiving corp. Great to see Pitta and Dickson back in action. Everybody made catches, drew penalties, got open and generally gave Joe nice targets to throw at. I want to especially call out Deonte Thompson. Jermaine Lewis 2.0 I think once he gets a few more games under his belt and really learns what it takes to be an NFL returner, sky is the limit for him. That stop-and-go he caught from Tyrod in garbage time, was a thing of beauty.

Which brings me to the special teams. Billy who? Remember the name Justin Tucker. Every kick on the money, dead center, with distance to spar. The fact that his first real NFL kick, when it counts, was a 46 yarder is incredible. You figure Harbs would have eased the kid in with maybe a chip-shot 23 yarder. Nope. Go earn your keep. Now. And the special teams coverage, for once, was excellent. You can see that once they get a few things straightened out on the returns, Thompson and Jones are going to start breaking them.

If you didn’t know that the Ravens have gone from Marvin Lewis, to Mike Nolan, to Rex Ryan, to Greg Matison, to Chuck Pagano to Dean Pees, you would have no idea from last night that anything has changed since, oh, circa about 1999. Players were flying to the ball and Ed Reed was Ed Reed. He only just set the NFL for career interception return yardage. The next active player? Charles Woodson. He only trails Ed by 600 yards... Ed is now 10th all-time in career interceptions and 8th in pick-6’s. I think the bust in Canton is already complete –just need to chisel some dates on it. Green is going to get his and he did last night. But the defense kept the Bengals out of the end zone, for the most part, and that is what is important- 3’s instead of 7’s.

Overall you have to give the coaches credit. It was a well architected game plan and they made nice adjustments on the fly. Adjustments during the game has always been a mixed bag with the Ravens, especially on offense; although Pagano did a nice job last year doing this with the defense. I think all of Baltimore can exhale now that we have seen the real Dean Pees implement and execute a real defensive game plan for a real NFL game. Pressure was lacking a bit in the first half, and Cincy seemed to have some success moving the ball in the first half also, but by midway through the third quarter, Pees & Co. shut the door on that and brought the pain to Ginger.

Lardarius Webb returning punts. Why? Why?! WHY?!?!?!? Okay if all you are going to have him do is fair catch them, but to allow him to try to return. Odds are, only bad things will happen when Webb doesn’t fair catch. He is far too valuable to risk to injury.

Calling three or four end-arounds, double reverses, whatevers. I’m sorry, just because you called the play twice before, and nobody in their right mind would even consider calling them a third time, does not give you license to do just that. Save those for three or four times during a *season*, not a game.

Time out management. I thought we wasted a time out each half needlessly because we couldn’t get our act together. Same old, same old…

Honestly, really only the replacement refs. The had some real head scratchers that were quite ugly. The illegal procedure call on the defense before the ball was snapped? Webb’s roughing the QB…? Shaking my head… A phantom block in the back. Lots of interference and holding no-calls for both teams. That’s it for the ugly- too much of a positive high from the absolute deconstruction of a division rival.

Now it is a commuter train ride to Philly. This will be the true first test of the Sugar Huddle Offense. It will be interesting to see how well the players are able to communicate on offense in a hostile road environment. Given that the Eagles only defeated Cleveland by 1 point, I like our chances, even considering the game was in Cleveland. Vick threw, what, like 19 interceptions that game? When Ed watches film for this game and preps for it, he is going to be as excited as the kid in "Porky’s"…

I have to admit, I was entering the season with a bit of trepidation. What with Suggs being out, the O-Line being about as chaotic as one of Stephen Hawking’s string theories, I had some real genuine concerns. I would have been happy with a 31 – 27 squeaker. Instead I got answers, up close and personal and all in my face, rhetorically speaking of course. It was almost as if to a man the Ravens were insulted that anybody had any doubts. I do not have any, evermore!