The Baltimore Ravens held their Training Camp practice indoors yesterday in front of the media, lucky Lottery-winning fans and Sirius NFL Radio crew of Ross Tucker and Pat Kirwan. It was good to see a bunch of previously absent players on the field taking part in drills, although there still were a few others still missing.

After practice, head coach John Harbaugh said that the ones who returned to practice today may still not play in Thursday's exhibition opener at the Atlanta Falcons. That group could include rookie OLB Courtney Upshaw, LT Bryant McKinnie and DT Haloti Ngata. At the same time, the other veterans probably will only play a quarter at most, if not only a series or two before giving way to the rest of the roster.

Special Teams practice was at the beginning, with kick returners including Jacoby Jones, Anthony Allen, Asa Jackson, Deonte Thompson and Bobby Rainey. Rookie center Gino Gradkowski was part of the wedge on the return team. Gradkowski is expected to start Thursday night in place of veteran Matt Birk,who has not practiced this week.

The 90 players are split into position-specific drills, while the kickers take turns nailing kick after kick from various distances. Although it appears that rookie Justin Tucker has a stronger leg and has hit a few more than veteran Billy Cundiff, the competition has to be considered dead even at this point.

In 11-on-11 drills, backup QB Tyrod Taylor hits rookie WR Tommy Streeter on a quick slant, but Courtney Upshaw put his shoulder into Streeter flattening him to the ground. Overheard was a member of the media stating, "Guess his shoulder's okay!"

In the two-minute drill, QB Joe Flacco is zipping passes right, left and center, all with authority and some into tight holes in the defense. Fourth down comes and placekicker Bully Cundiff nails a 42-yard field goal.

At the beginning of Harbaugh's post-practice press conference, he gave a shout-out to two of the wounded military veterans who attended practice today, both with prosthetic legs although they seemed virtually unaware of their infirmities in their excitement of being invited to meet and greet the team. 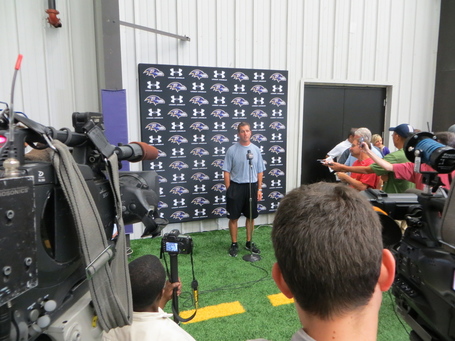 Flacco spoke to the media next and answered questions about how much he might be playing in Thursday's pre-season opener as well as his constant comparisons to Falcon QB Matt Ryan. 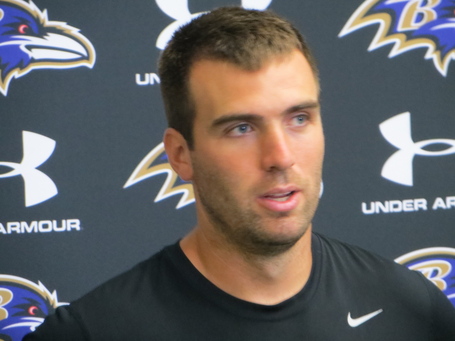