The highs and lows of an undrafted rookie can be best summed up in the trials and tribulations of Baltimore Ravens rookie linebacker Nigel Carr. The Alabama State product was disappointed by not hearing his name called during the 2012 NFL Draft but then a call from the Baltimore Ravens brought him to tears. Not only was he getting a chance to prove he could make it at the pro level, he was getting that opportunity to do it alongside of arguably the greatest linebacker in NFL history in Ray Lewis.

After Saturday's team practice at M&T Bank Stadium, I sat down next to him in the locker room for a few minutes to ask him about his pro experience so far.

Baltimore Beatdown (BB): So, how did it finally feel to step out on the Ravens playing field?

Nigel Carr (Carr): "Oh my gosh, it was awesome. I had goosebumps all over. It felt like I was in a real game, coming from a smaller school you know, excited by all the fans and all the purple, man, the whole environment. It just was a great experience."

(Read more of my interview with Nigel Carr after the 'Jump') 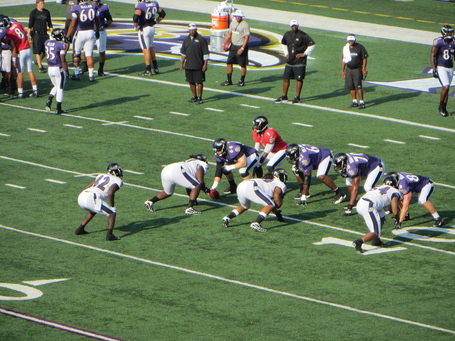 BB: Coaches are speaking pretty highly of you. How does a guy who goes undrafted do so well in Training Camp against pros who he's never faced before?

Carr: "It's just hunger man, being a humble man. Really God blessing me with favor of being able to pick things up, and as of right now I feel I still have a long way to go until I'm able to play on a consistent good level. I still have to work, to get better at situational football, knowing situations and calls, different personnel. It's just a work in progress."

BB: The Ravens have a history of taking undrafted free agent linebackers and making them into NFL stars. There's Bart Scott, Jameel McClain on this team and of course Dannell Ellerbe. Do you think you have what it takes to be a starter on this team?

Carr: "No question. I mean, as of right now I know I'm not going to be a starter. My way on this team will be Special Teams, but down the line no question. That's what we play for. We play to be great, you don't just play to make the team. I'd be down on myself if I said I wouldn't be able to start on this level. It's all about getting better every year, year in and year out, working hard and staying humble."

BB: What was it like sitting home and getting that phone call from the Baltimore Ravens, knowing that you were going to be looking at your right or your left and seeing #52 there?

Carr: "It was a depressing time for me because I really wasn't getting no calls. Everybody said they had a draft-able grade but they didn't want to take a chance. But when the Ravens called, it was just a blessing and I cried, you know what I'm saying. I mean my mom was happy, the mother of my child was happy, and we knew it was an opportunity. Being around Ray, being around a guy so great, you see the work he's put in on and off he field. It's just learning from him, learning from a guy like Jameel and Dannell and Ed, on how they be professionals. I'm just going to pick it up." 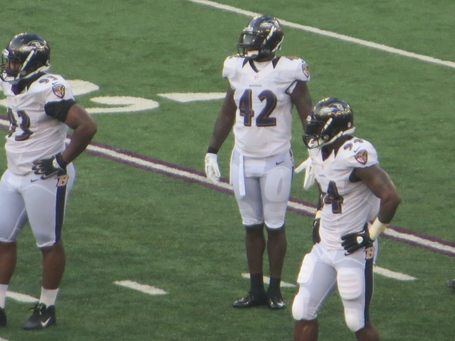