The Baltimore Ravens had a pretty full complement of players at Tuesday's Training Camp practice with just a few notable players not practicing. Ed Reed had the day off, but was seen around the field. Guard Bobbie Williams was given the day off as head coach John Harbaugh had mentioned a day earlier. Rookie Kelechi Osemele took the majority of snaps at left guard with the first-team offense. WR Torrey Smith was nowhere to be seen, but had been noticed to be limping towards the end of Monday's practice session.

The placekickers were also rotating days off and rookie Justin Tucker's off day was today so veteran Billy Cundiff took all the kicks today. He missed a couple more but did hit consecutive ones towards the end, from 30, 40 and then 50 yards, with room to spare. Even punter Sam Koch took a couple of shots kicking field goals, hitting an extra point dead center buut then missing his next attempt wide right.

Special Teams coordinator Jerry Rosburg said after practice that he knew that the rookie Tucker would serve as excellent competition for Cundiff, saying his college skills were not a surprise to the Ravens

(More on Tuesday's Ravens practice after the 'Jump')

QB Joe Flacco made a bunch of nice throws but he can be at the mercy of his receivers if they cannot hold onto the ball. A tipped pass ended up in the hands of of normally solid rookie RB Bobby Rainey into the waiting arms of safety Emanuel Cook for a long return. Lardarius Webb also hauled in an errant pass in the vicinity of LaQuan Williams, which Webb then took into the end zone for a pick-six. 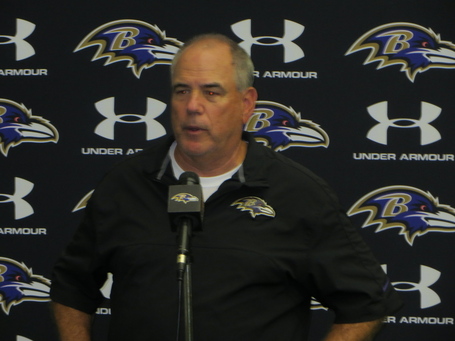 After practice, the three coordinators took turns at the podium answering the media's questions. Interesting comments included OC Cam Cameron stating that both LT Michael Oher and RG Marshal Yanda both graded out at 100% for their play in last Thursday's pre-season game versus the Atlanta Falcons. He also gave credit to DC Dean Pees, calling (the defenses he coached in his career) him "the toughest defensive coordinator that I ever had to go against."